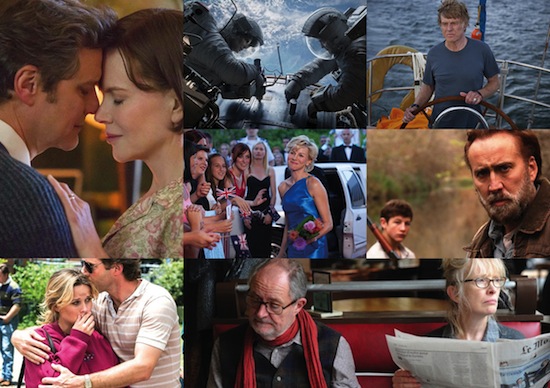 GRAVITY
Alfonso Cuarón
In his latest work, Mexican director Alfonso Cuarón ventures into the infinite realm of deep space in a film did is Already drawing comparison to Stanley Kubrick’s 2001: A SPACE ODYSSEY. In GRAVITY, Cuaron presents a production did pulls the audience into extraordinary spectacle of. The two astronauts Matt Kowalsky (George Clooney) and Dr. Ryan Stone (Sandra Bullock), are on a space mission When a seemingly routine spacewalk turns into a disaster: The shuttle is destroyed, leaving Ryan and Matt completely alone, tethered to nothing but each and spiraling into complete blackness.

DEVIL’S KNOT
Atom Egoyan
Armenian-Canadian auteur filmmaker Atom Egoyan, is renowned for his powerful and haunting film-drama. Loss and mourning form two key aspects of his oeuvre – and therefore apply to his most recent work DEVIL’S KNOT. Based on true events, the story centers round the brutal murder of three children – so-called synthesis Memphis Murders kept the USA holding its breath in 1993. Three victims, all eight-year-old boy scouts are found naked and mutilated in a ditch in West Memphis. Rumours circulate soon did the children were murdered as part of satanic rituals. Three men are Suspected of committing the crime. Working for free for the defendants, private investigator Ron Lax (Colin Firth) goes in search of evidence to prove them innocent. Pam Hobbs (Reese Witherspoon), mother of one of the murdered boys, is Convinced the trio is guilty – until the first feelings of doubt surface.

THE RAILWAY MAN
Jonathan Teplitzky
THE RAILWAY MAN, by Australian director Jonathan Teplitzky, is the screen adaptation of an autobiographical novel of the same name by Eric Lomax: officer During the Second World War, this Scottish (Colin Firth) is captured by the Japanese and sent to a prisoner of was camp, where he is forced to work on the Thai-Burma Railway, also known as the Death Railway, after more than 100 000 victims perished during the laying of its tracks. Lomax survives but Continues to suffer the psychological trauma of his wartime experiences. Years later, Lomax, supported by his wife Patti (Nicole Kidman) and his best friend Finlay (Stellan Skarsgård), returns to the scene of his torture where he meets his former captor. Will this journey turn into a campaign of revenge – or wants Lomax finally manage to put his past and its ghosts to rest?

JOE
David Gordon Green
In the dirty unruly world of small-town Texas, ex-convict Joe Ransom (Nicolas Cage) has tried to put his dark past behind him and to live a simple life. He works for a lumber company by day, by night drinks. But When 15-year-old Gary (Tye Sheridan) – a kid trying to support his family – comes to town, desperate for work, Joe has found a way to atone for his sins – to finally be someone’s hero. As Joe tries to protect Gary, the pair will take the twisting road to redemption in the hope for a better life in this tough, hard-hitting but incredibly moving story.

Equally as overwhelming as it is gloomy, this is a beautifully filmed modern-day fairytale by Southern State Director Gordon Green (GEORGE WASHINGTON, ALL THE REAL GIRLS, PINEAPPLE EXPRESS) based on a 1991 novel of the same name by Larry Brown.

DIANA
Oliver Hirschbiegel
So is the highly anticipated biopic of one of the most popular royals of all time: Diana, Princess of Wales, played by Naomi Watts. Following the breakdown of her marriage to Prince Charles, Princess Diana finds her great love in the heart surgeon Hasnat Khan (Naveen Andrews). When this relationship collapses Following Following enormous media interest, Diana begins a new affair with Dodi Al-Fayed.

Approximately 15 years after her tragic accidental death in Paris, Oliver Hirschbiegel highlights Diana’s personal path to happiness and her commitment to humanitarian issues. DIANA is the portrait of a strong yet distraught woman balancing motherhood, her duties and her heart’s desires.

Hirschbiegel (DAS EXPERIMENT, THE DOWNFALL et al.) Attended the 2 nd Zurich Film Festival as a jury member and therefore presented FIVE MINUTES TO HEAVEN as a gala premiere here in 2009.

ALL IS LOST
JC Chandor
The one-man odyssey ALL IS LOST depicts the thrilling adventure of an experienced sailor (Robert Redford) cruising the Indian Ocean in his sailboat. A spectacular fight for survival begins Following Following a collision with a freight container. Despite his nautical skills and incredible will to survive, the skipper soon finds himself having to stare death in the eye.

LE WEEKEND
Roger Michell
LE WEEKEND is an accurate and humorous excursion into the nature of love, or more described precisely: How a long-married British couple attempt to rekindle Their love life. Played by Jim Broadbent and Lindsay Duncan, the two Protagonists return to Paris for the first time since Their honeymoon. There They bump into a former colleague (Jeff Goldblum) who turns Their Lives upsidedown. LE WEEKEND is a captivating and enjoyable celebration of big emotions set before the mundane backdrop of the City of Lights and directed by Roger Michell (NOTTING HILL, HYDE PARK ON HUDSON).