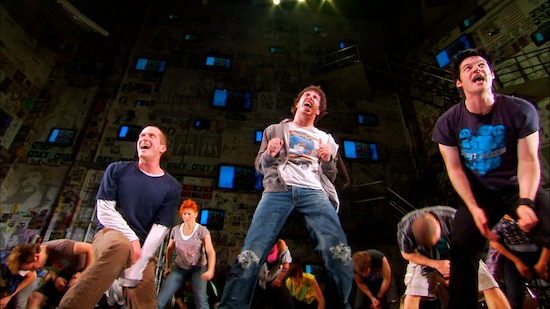 The documentary BROADWAY IDIOT chronicling the momentous collaboration between rock and roll icons, Green Day and the “Great White Way” to create American Idiot on Broadway will be released nationwide in theaters and on VOD October 18 with an exclusive theatrical engagement in New York starting October 11th.

From punk rock mosh pits and sold-out stadiums to the Great White Way, this electrifying documentary follows Green Day’s Billie Joe Armstrong as he works with Broadway producers to turn his mega-hit album, “American Idiot,” into a staged Broadway musical. The film goes behind the scenes to reveal the creative choices and challenges made by Grammy winner Billie Joe and Tony winning director Michael Mayer (Spring Awakening) to create the thrilling and one-of-a-kind musical experience. More than just a show, but a personal and transformative experience for Billie Joe, the film provides insider access to Billie’s journey from rock star to Broadway star, dress rehearsals, performances and more. BROADWAY IDIOT provides a unique window into the art of theater as rock stars and stage stars collide and create something never seen before.