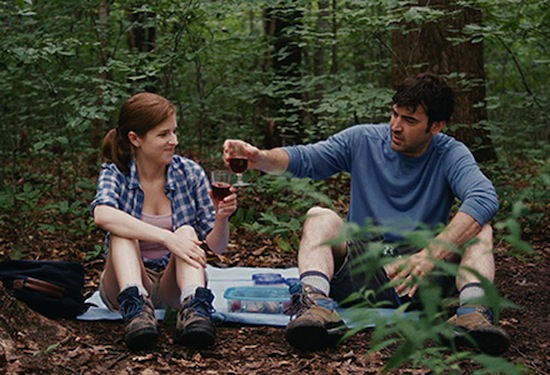 Appearances are often deceiving. Two people who might appear to be perfect for each other on the surface by the way they interact might be incompatible once things get deeper. In DRINKING BUDDIES, a romantic comedy from writer/director Joe Swanberg (V/H/S), pretty and playful Kate (Olivia Wilde) works as a marketer at a Chicago-area brewery. Though she is in a relationship with the pedantic Chris (Ron Livingston), she clearly has better chemistry with one of the brewers she works with, Luke (Jake Johnson). However, the outgoing Luke is engaged to Jill (Anna Kendrick), a somewhat shy special education teacher.

Just from reading the description of those characters you might think that Kate and Luke are a better fit for each other, and on the surface that’s obvious. While they’re together they’re flirty and playful. Kate in particular is clearly struggling with the romantic feelings she has for Luke, and while the two are always talking they never talk about what’s going on between them. On the other hand, Jill and Chris seem to have a connection of their own – Chris is the type of guy who doesn’t think Kate is sophisticated enough for him (he stops making out with her to give her a John Updike book to read. Yeah, he’s THAT guy). He doesn’t even like the free beer Kate gives him! Nonetheless, Jill is still compatible with Luke – it’s really the “interesting, polite gentleman” (as Jill calls Chris) who is the odd man out. But that still leaves the question of what becomes of Luke, Jill, and Kate.

Drinking Buddies is an exercise in body language and brilliant camera work. Because Kate and Luke never talk about their relationship (or lack thereof), shots are built around their symbolic physical closeness and distance. Because of what is seen and not said, it’s an incredibly tense movie despite being about relationships – as a viewer you almost want to cut in and state the obvious to all the main players. But that’s what makes Drinking Buddies such a fun movie. Swanberg could have gone the easy route by making Kendrick’s Jill an ice queen (after all, that’s how most mainstream romantic comedies do it), but just because Kendrick’s Jill is mousier than Wilde’s Kate doesn’t mean she’s not right for Luke.

If you like your movies subtle, Drinking Buddies is a wonderful film. I immediately wanted to watch it again to see what I missed of the actors telling a story without stating the obvious. In particular, I was blown away by Wilde – I’ve only seen her in big-budget films like TRON: Legacy and Cowboys & Aliens, so I never suspected she could pull off a subtle role like this. If mainstream romantic comedies have burned you out on their silliness, Drinking Buddies will restore your faith in the genre.

Also, look for an uncredited Jason Sudeikis as Kate and Luke’s goofy boss, Gene Dentler (who is oddly credited as “Himself”).