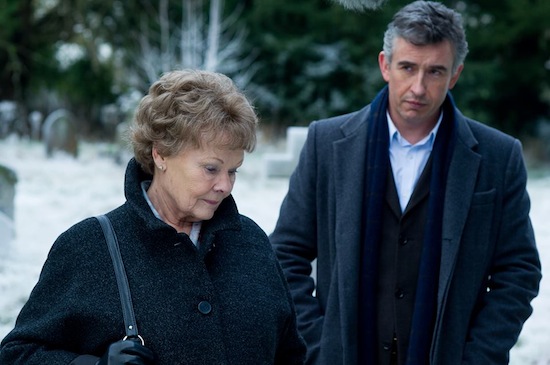 The 57th BFI London Film Festival American Express Gala will take place on Wednesday 16 October at the Odeon Leicester Square with the UK Premiere of Stephen Frears’ PHILOMENA, described as the moving, funny and at times shocking true story of one woman’s search for her lost son. Academy Award ® winner Judi Dench plays the title role, with BAFTA winner Steve Coogan as Martin Sixsmith. The screenplay is written by Steve Coogan and Jeff Pope, based on the book “The Lost Child of Philomena Lee” by Martin Sixsmith. Pathé release the film in UK cinemas on 1 November 2013.

Falling pregnant as a teenager in Ireland in 1952, Philomena was sent to the convent of Roscrea to be looked after as a “fallen woman”. When her baby was only a toddler, he was taken away by the nuns for adoption in America. Philomena spent the next fifty years searching for him but with no success. Then she met Martin Sixsmith, a world-weary political journalist who happened to be intrigued by her story. Together they set off to America on a journey that would not only reveal the extraordinary story of Philomena’s son, but also create an unexpectedly close bond between Philomena and Martin.