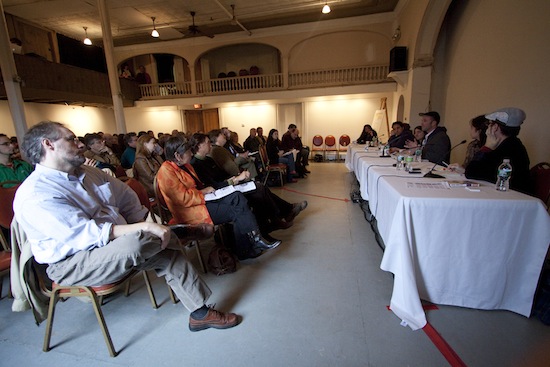 The Camden International Film Festival (CIFF) has unveiled the lineup for its Points North Documentary Forum. Now in its fifth year, the Forum has quickly become the largest gathering in New England of filmmakers, key decision makers and thought leaders in the documentary field.  The three-day conference program runs concurrently with the festival from September 27 – 29, 2013 at the historic Camden Opera House in Camden, Maine, and Union Hall in Rockport, Maine. This year’s program will feature a wide range of panel discussions, workshops, case studies, networking events and two public pitch sessions. Points North is dedicated to providing independent documentary filmmakers with unique opportunities for both professional development and creative inspiration, helping build a vibrant regional filmmaking community while sustaining a conversation about new directions in nonfiction storytelling.

This year, some of the documentary industry’s leading broadcasters, distributors, funding organizations and executive producers will convene at the Points North Pitch, a public pitch session held during the Forum on September 28. Seven filmmakers will be given an opportunity to pitch their works-in-progress and receive critical feedback from industry delegates before a live audience. The event, which will be free and open to the public, is a unique opportunity for filmmakers to secure vital support for their projects and audience members to see how documentaries are developed in their early stages. This year’s panel will include representatives from PBS, Sundance Institute, POV, Al Jazeera America, Cinereach, LEF Foundation, DirecTV, Naked Edge Films, LEF Foundation, Fledgling Fund and Documentary Educational Resources.

One project will receive the Points North Pitch Award and Modulus Finishing Fund, which comes with a $1000 cash prize from Documentary Educational Resources, a $10,000 post-production package from Boston-based Modulus Studios, a $3000 tuition scholarship to Maine Media Workshops and three consultations with the Tribeca Film Institute. A full list of selected projects and filmmakers is included below. Last year’s winner, IN COUNTRY, has gone on to receive the Garret Scott grant and has been selected by the Hot Docs Forum and IFP Labs, while being recognized by indieWIRE as one of the “50 indie films to look out for in 2013.”

“We’re honored and excited to have the opportunity to continue to develop a platform for filmmakers to introduce their projects to some of the most influential decision-makers in the documentary industry,” says Ben Fowlie, Founder and Executive Director of the Camden International Film Festival.

Filmmakers, students and other Points North attendees will have numerous opportunities to connect with industry delegates throughout the festival weekend, both formally during panels, workshops and one-on-one sessions, and informally during CIFF parties and receptions. This year’s Points North Reception – on Friday, September 27 in the Camden Opera House – will be sponsored by the LEF Foundation, also one of the founding sponsors of the Points North Documentary Forum.

One of the themes running through this year’s program will be the ways that documentary storytelling can be used to strengthen communities and promote public dialogue around important issues, leading to real social impact.

On September 28, the Forum will host the inaugural Points North Engagement Summit: Aging in Maine, in which approximately 15 Maine-based nonprofit leaders and healthcare professionals in the field of aging will converge in Camden for a daylong closed-door strategic summit meeting with documentary filmmakers focused on aging issues. The purpose of the meeting is to explore how their work can be supported and enhanced through the use of powerful documentary films focused on the experiences of older adults, their loved ones and caretakers. The summit agenda will be designed and facilitated by Working Films, an organization that specializes in connecting storytelling with community engagement and action.

During the festival, there will also be an Aging in Maine sidebar of film screenings, including a highlighted screening of Banker White and Anna Fitch’s THE GENIUS OF MARIAN. Following the festival, CIFF will work with participating organizations to implement the ideas devloped at the summit and spearhead a screening tour of selected films in 8-10 communities across Maine. The Aging in Maine program is made possible by support from The Fledgling Fund, Camden National Bank, Pen Bay Healthcare Foundation and The Bingham Program, as well as partnerships with the University of Maine Center on Aging, the Portland Press Herald and The Conversation Project.

Since 2011, the Points North Documentary Forum has been highlighting experiments in documentary storytelling that take advantage of new media technologies. This year, the Forum will debut a speaker series called Doc/Tech, featuring innovators and thought leaders working at the intersections between storytelling, technology and social activism. Confirmed speakers include Alexander Reben (Creator of the BlabDroid documentary filmmaking robots), Elaine McMillion (Director of the groundbreaking interactive documentary Hollow), Sasha Costanza-Chock (MIT Professor and transmedia activist) and Nonny de la Pena (Creator of Gone Gitmoand Hunger in Los Angeles virtual reality journalism projects). The session is made possible by support from the Maine Technology Institute, and will be hosted by the MIT Open Documentary Lab’s William Uricchio.

The opportunity to meet one-on-one with visiting industry delegates is another important part of the Points North experience. The 2013 program includes a session called Social Media Audit, in which filmmakers have a chance to spend 20 minutes receiving tailored feedback on their film’s online presence from social media and audience engagement gurus Kristin McCracken (former VP of Digital Media at Tribeca Enterprises) and Christie Marchese (Founder/Executive Director, Picture Motion).

For filmmakers interested in strengthening their storytelling craft, Points North will feature an editing masterclass led by Jonathan Oppenheim, editor of PARIS IS BURNING, THE OATH, and 2013 CIFF selection WILLIAM AND THE WINDMILL. For those who want to delve into the history of documentary film, filmmaker and Harvard professor Robb Moss (THE SAME RIVER TWICE, SECRECY) will lead a masterclass on the evolution of nonfiction storytelling techniques and the ethical and aesthetic issues that have shaped documentary filmmaking since the 1950s.

“We’re really honored to be bringing in such a diverse, talented and inspiring group of participants to Camden for this year’s Forum,” says Points North Director Sean Flynn. “Whether you’re developing a feature, producing a short for the web, getting into interactive media, using media as a tool for social change, curious about film history or interested in craft of documentary storytelling – there’s something here for everyone.”

Access to the full conference program is open to all CIFF passholders. Passes are now on sale on the Camden International Film Festival website. For more information, please visit: http://camdenfilmfest.org/pointsnorth.

A full conference schedule and list of industry delegates is attached to this press release and available online.

Directed by Aaron I. Naar

Produced by Benjamin Dohrmann and Aaron I. Naar

Directed and Produced by Lisanne Skyler

A WILL FOR THE WOODS

In this workshop, Danielle DiGiacomo (Manager of Film Distribution, The Orchard) demystifies the brave new world of digital distribution. Drawing on case studies to explore topics such as the lifecycle of a digital release, negotiating contracts, strategizing about windows and platforms, the varieties of VOD, and retail marketing, this session will leave you full of ideas for how to maximize the potential of your film’s digital release. Bring your notebook!

From Story to Action

Since the days of Grierson, documentary filmmakers have been driven by a desire to affect social change through storytelling. Today’s filmmakers have more tools at their disposal than ever before to engage audiences and close the gap between inspiration and action. In this panel, filmmakers, outreach coordinators and funders discuss ideas and strategies for using film to create meaningful social impact.

In this special masterclass, award-winning filmmaker and Harvard professor Robb Moss (SECRECY, THE SAME RIVER TWICE) leads participants on a guided tour through the history of documentary film. Using clips from both classic and contemporary films, Moss traces the evolution of nonfiction storytelling techniques and explores both the ethical and aesthetic issues that have shaped documentary filmmaking over the past six decades.

Top programmers from major networks discuss everything you ever wanted to know about documentary broadcast, including programming priorities, marketing, multiplatform distribution and more. Come meet the broadcasters before you see them onstage at the Points North Pitch.

Building an audience online has become an indispensable part of independent filmmaking, but where do you start? Where do you find your audience and what content should you be sharing with them? In these one-on-one sessions, you’ll have a chance to spend 20 minutes getting tailored feedback on your film’s online presence on your project from social media and audience engagement gurus Kristin McCracken (former VP of Digital Media at Tribeca Enterprises) and Christie Marchese (Founder/Exec Director, Picture Motion). Bring a laptop and RSVP to pointsnorth@camdenfilmfest.org by September 20. Space is limited!

Behind every documentary is the story of how the filmmaker first met his/her subject and negotiated that all-important access. Did they start filming right away? Did they fully reveal their intentions for the film? Did they befriend their subjects or maintain a distance? In this panel, three directors from the 2013 CIFF program discuss the complicated relationship between filmmaker and subject.

Documentary editor Jonathan Oppenheim reveals the conceptual strategies he uses to discover and shape a film’s story structure during editing. Drawing on examples from past and present work – including PARIS IS BURNING, THE OATH and WILLIAM AND THE WINDMILL – Oppenheim explores issues such as context, intention and the unique challenges of the documentary form.

After a busy day of panels and workshops, come unwind over drinks, mingle with filmmakers and industry delegates and make some new friends. Open to all festival passholders. This reception is made possible by LEF Foudation, a Points North founding sponsor and major supporter of the New England filmmaking community.

Seven filmmakers pitch their works-in-progress to an international panel of funders, broadcasters and producers. Each pitch lasts exactly 7 minutes, followed by 12 minutes of critical feedback. This is an invaluable chance to see first-hand how leading industry decision-makers evaluate projects.

Throughout its history, documentary film has been a catalyst for social change and a unique medium for social connection. In this series of short thought-provoking talks, we explore how new media technologies are blurring the lines between producers, subjects and audiences, while expanding the possibilities for documentary storytelling to act as an agent of social change and civic engagement.

Grab some brunch in Rockport and spend your Sunday morning experiencing The New York Times live. Six filmmakers will pitch their ideas for short, opinionated documentaries that fit the editorial and creative scope of The New York Times’ Op-Docs series. A jury of Op-Docs alumni and The New York Times staff will award one filmmaker with a budget of $2,000 and the chance to produce their film for a potential online audience of millions.