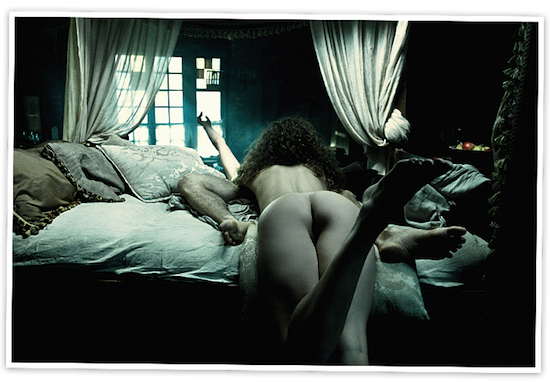 German Currents: Festival of German Film is back for the seventh annual showcase at the American Cinematheque’s Egyptian Theatre in Hollywood. German Currents will present a varied selection of current German cinema; including features, documentaries, short films, as well as a family/youth film.  The festival will open with the US Premiere of MEASURING THE WORLD (DIE VERMESSUNG DER WELT) directed by Detlev Buck on Friday, October 4th, 2013, continuing through Monday, October 7th, 2013.

Two of the greatest minds of the 19th century, mathematician Carl Friederich Gauss (Florian David Fritz) and scientist Alexander von Humboldt (Albrecht Abraham Schuch), dedicate their studies to measuring and comprehending the world they live in.  Based on Daniel Kehlmann’s best-selling novel of the same name, this visually stunning epic is a playful re-imagining of the great men’s lives. Humboldt, a man with a passion for global exploration, is contrasted with Gauss, a man who experiences his world through mathematical theories and figures.  Humboldt, aided by his colleague,  Aimé Bonpland, travels the globe physically engaging the world he wishes to understand, applying modern, scientific thinking to comparatively unknown regions.  Though he remains in the same destitute community for much of his life, Gauss’ interior journey of mathematical discovery proves to be just as rich and visually stunning as Humboldt’s adventures in remote areas of the world.  Fact and fiction are mixed, often to humorous effect, to chronicle the findings of two very different men who nevertheless sought the same answers. MEASURING THE WORLD was nominated for two German Film Awards in 2013, and the film has won Best Costume Design and Best Make-up Design awards at the 2013 Austrian Film Awards.

Jan Ole Gerster’s wry and vibrant feature debut Oh Boy, which swept the 2013 German Film Awards, paints a day in the life of Niko, a twenty-something college dropout going nowhere fast. Niko lives for the moment as he drifts through the streets of Berlin, curiously observing everyone around him and oblivious to his growing status as an outsider. Then on one fateful day, through a series of absurdly amusing encounters, everything changes: his girlfriend rebuffs him, his father cuts off his allowance, and a strange psychiatrist dubiously confirms his ’emotional imbalance’.  Meanwhile, a former classmate insists she bears no hard feelings toward him for his grade-school taunts when she was “Roly Poly Julia,” but it becomes increasingly apparent that she has unfinished business with him. Unable to ignore the consequences of his passivity any longer, Niko finally concludes that he has to engage with life. Shot in timeless black and white and enriched with a snappy jazz soundtrack, this slacker dramedy is a love letter to Berlin and the Generation Y experience.

Matt Sweetwood hails from the Midwest. Though he has lived in Germany for over ten years, the people and their culture remain a mystery to him. He undertakes a last-ditch attempt to figure the place out: by exploring the heart of German culture, their beer. If he delves into their rites and rituals, explores all the contradictions and stereotypes, will that make him, finally, a part of them? The infinite variety of beers, breweries and beer fests, the age-old history of beer, is more overwhelming than the American ever imagined. The trail of his research leads him to places far off the beaten tourist path, light-years away from the Oktoberfest. He encounters people whose dialect he barely understands. Amazingly, he finds that a country as small a Germany is subdivided into a thousand different tongues and customs, with beer as the common thread.  He discovers a land full of oddities and contradictions. The Germans are deathly serious and silly at the same time, tradition-bound and weirdly visionary. Ultimately, he forms a real bond with them, finding friends where he least expected them.

A lively German language adaptation of Mark Twain’s classic satire.  Huck Finn, having found treasure with his best friend Tom Sawyer, is now chafing in the shoes and starched shirts that come with his new wealthy lifestyle. He’d like nothing more than to kick off his shoes and run wild along the river. He gets his chance when his drunken father (August Diehl) arrives and demands a share of Huck’s money. Huck decides to escape downriver and he brings along Jim, the house slave who has recently discovered that he will be handed over to a slave trader. The two travel the Mississippi River on a makeshift raft, hoping to outrun Huck’s violent father and find a place where Jim can be accepted as a free man. Twain’s timeless adventure is exuberantly brought to the screen in a film that can be enjoyed by the whole family.

Join the Echo Park Film Center for an afternoon of cinematic exploration and education with the EPFC “Filmcicle” in the courtyard of the Egyptian Theatre. The “Filmcicle” is a bicycle powered cinema and school on 3 wheels. Using traditional analog motion picture film we encourage audience members – young and old – to spend some time with us creating cinematic wonder.

Official selection (competition) at the 2013 Berlin International Film Festival, GOLD is a Western about seven German immigrants who set out in search of gold in the backwoods of British Columbia during the Klondike Gold Rush in 1898. Each have their motives: an older couple seeking security, a father (Lars Rudolph) hoping to help his impoverished family, an unpleasant newspaperman (Uwe Bohm) chronicling the journey, and a mysterious packer (Marko Mandic) with a past to outrun. The last to join is Emily Mayer (Nina Hoss), a metropolitan woman whose delicate demeanor masks a steely determination to survive. Assembled by a deceptively confident businessman of questionable motives, the settlers must travel through a relatively uncharted stretch of Canadian wilderness to reach their goal, the gold fields of Dawson. As the path grows more treacherous, betrayals come to light and desperate choices are made. Following in the footsteps of McCabe and Mrs. Miller and Meek’s Cutoff, Gold is an epic that offers an unconventional take on the well-worn Western genre.

Winner of the Jury Special Mention at the 2013 Berlin International Film Festival, LAYLA FROURIE is a film about Layla, who is a single mother living with her son in Johannesburg and getting by with casual work. After training as a polygraph operator she manages to secure a job with a company specialising in lie detectors and security. On her way to her new workplace she is involved in an accident which will fundamentally change her life. Layla becomes entangled in a web of lies and deceit. The truth could lead to the loss of her son.  For her third feature film Pia Marais – who has lived in Berlin for many years – returned to South Africa where she grew up to make this classic thriller. She uses the genre to take a look at a country which still bears the scars of apartheid. In this way, everyday life in South Africa enhances the tension in the screenplay which she co-wrote with Horst Markgraf. Almost casually, Layla Fourie develops into a political thriller which takes the audience into the paranoia, fear and mistrust of a society that is still profoundly affected by racial conflict.

Philip (Philip Hochmair) is is a young and successful actor working for the most important theatres in Vienna and Hamburg with a committed and single-minded approach to his craft. During a season in which he is busy with a production of Buchner’s Woyzeck, Philip is visited by the elderly Walter (Walter Saabel), who introduces himself as the uncle he’s never met. Walter is a former circus artist and the two men soon bond over stories of their careers. These two entertainers, both at different stages in their lives, learn from each other’s experiences. As his conversations with Walter grow more philosophical, Philip slowly emerges from his once isolated lifestyle.  He is even inspired to enlist Walter’s assistance in helping a Moldavian neighbor with an immigration issue. The actors, though not related, essentially play themselves and the largely improvised script was developed around their personal experiences. The result is a rare onscreen friendship that feels warm and sincere. Co-directors Tizza Covi and Rainer Frimmel draw on their documentary filmmaking background to create a naturalistic atmosphere in which these performances can flourish.

Winner of multiple awards, including 2013 German Film Award (Lola) for Best Documentary film, MORE THAN HONEY, directed by Oscar-nominated director Markus Imhoof (THE BOAT IS FULL) tackles the vexing issue of why bees, worldwide, are facing extinction. With the tenacity of a man out to solve a world-class mystery, he investigates this global phenomenon, from California to Switzerland, China and Australia. Exquisite macro-photography of the bees (reminiscent of MICROCOSMOS) in flight and in their hives reveals a fascinating, complex world in crisis. Writes Eric Kohn in Indiewire: “Imhoof captures the breeding of queen bees in minute detail, ventures to a laboratory to witness a bee brainscan, and discovers the dangerous prospects of a hive facing the infection of mites. In this latter case, the camera’s magnifying power renders the infection in sci-fi terms, as if we’ve stumbled into a discarded scene from David Cronenberg’s THE FLY.” This is a strange and strangely moving film that raises questions of species survival in cosmic as well as apiary terms.