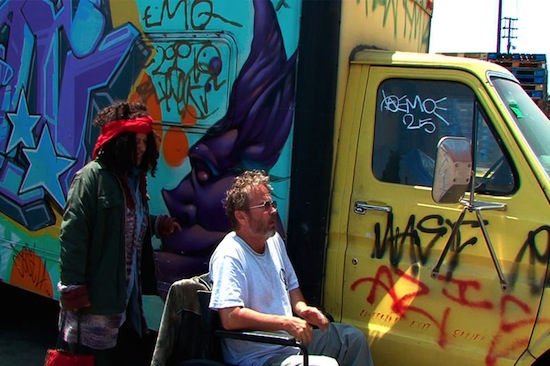 A Star For Rose, directed by Daniel Yost and starring Debbie Allen

25 films have been chosen for Narrative and Documentary Feature Competition at the upcoming 17th Hollywood Film Festival, taking place from October 17 to 21, 2013, at the ArcLight Cinemas in Hollywood.  Films include LIFE INSIDE OUT, directed by Jill D’Agnenica, which tells the story of a mother who returns to her dream of pursuing music, the passion of her youth, and through this finds a way to connect with her troubled teenage son. All filmmakers and talent in the movie are Hollywood based. The film was shot in and around Hollywood and embodies the festival’s theme of pursuing dreams.  Another film is A STAR FOR ROSE, directed by Daniel Yost and starring Debbie Allen which tells the story of three lost souls, homeless on Hollywood Boulevard’s Walk Of Fame, who meet in conflict, then slowly bond together to find meaning, humor and joy in their lives. Both of these projects will be presented here as World Premieres.

AUTUMN BLOOD Markus Blunder, Austria
High in the mountains, a widowed mother dies, leaving her two children orphaned. Fearing being split up they keep their mother’s death a secret. They survive until villagers destroy their innocence when they brutally assault the girl. Now the siblings must come of age to protect each other and survive.

AUTUMN WANDERER, Nathan Sutton, USA (US Premiere)
While dealing with his father’s schizophrenia, and the very real possibility of it being passed down, Charlie meets the woman of his dreams. (Celebrating Hollywood)

BURTON & TAYLOR, Richard Laxton, United Kingdom
Dominic West and Helena Bonham Carter star as Richard Burton and Elizabeth Taylor – Hollywood’s most volatile on-again-off-again lovers who famously played out every high and low of their love affairs, marriages and divorces in the public eye. They made their last stage appearance together in the 1983 revival of Noel Coward’s, “Private Lives.” This is the story of their ill-fated reunion, on and off stage. (Celebrating Hollywood)

FIRST PERIOD, Charlie Vaughn, USA
Part John Waters, part John Hughes: When new girl Cassie and outcast Maggie team up to win the school talent show the reigning queen bees, the Heathers, make a gnarly plan to stop them. It will take courage, makeovers, and a rap battle for our (girls?) to beat them in true 80’s style.

LIFE INSIDE OUT, Jill D’Agnenica, USA (World Premiere)
A mother, returning to her musical roots, ventures into the world of open mic nights and takes her troubled teenage son, Shane, along for the ride. Despite a rocky entry, her first steps prove to be the catalyst for changing not only her own life, but Shane’s as well, in complex and unpredictable ways. (Celebrating Hollywood)

LOVE’S IS NOT WHAT IT USED TO BE (EL AMOR NO ES LO QUE ERA) Gabriel Ochoa, Spain
Alex comes into Lucia’s life, two youngsters who start discovering each other. Paz and Jorge see how their relationship is fading and they don’t know what to do. Albert and Irene meet after some decades of separation. “Love’s Not What It Used To Be” explains love using the physical law of divergent trajectories.

LOVELESS ZORITSA (CRNA ZORICA) Christina Hadjicharalambous, Radoslav Pavkovic, Serbia
Zoritsa is cursed! Every man who falls in love with her, dies in strange ways. Hunted by the shotgun-carrying villagers whose sons she has taken to the underworld, she can rely on just one person – the new stubborn police officer. Only that, he doesn’t believe in “mumbo jumbo” and he is tempted to test her “kiss of death”. A dark fairytale comedy about “cursed” love.

MISCHIEF NIGHT, Richard Zelniker, USA (World Premiere)
Troubled 17-year-old Sean Holloway falls in with a group of teenage outcasts called “The Misfits,” known around town for their petty crimes and vicious pranks. But on the eve of Halloween -Mischief-Night- things spiral out of control, culminating into brutal violence, and Sean finds himself deeply in over his head. The terrifying night becomes a fight for survival and freedom. (Celebrating Hollywood)

THE RED ROBIN, Michael Wechsler, USA (US Premiere)
Dr. Nathaniel Shellner, 75, has led an extraordinary life as a psychiatrist working with traumatized patients fleeing war zones in refugee camps and adopting children eventually, earning a Nobel Prize for his work. As Dr. Shellner succumbs to cancer on a frigid, icy day, the family convenes at the house where the couple raised the children for a final, bittersweet farewell. Or, that’s the idea until all hell breaks loose after Tommy arrives and accuses his father of adopting his children not out of concern for their future well-being, but to use them for some warped psychological experiment. Tommy’s accusation explodes the evening, revealing a host of incidents between Nathaniel and the various family members as well as their own interpersonal issues.

THE REPUBLIC OF TWO, Shaun Kosta, USA
A close examination of the high-stakes game of heterosexual cohabitation in Los Angeles. Tim wants to be a doctor and Caroline doesn’t quite know what she wants. They both know their love is real, but can that love endure a town full of possibilities and temptation? (Celebrating Hollywood)

SONGS FOR AMY, Konrad Begg, United Kingdom
After a disastrously debauched stag do, struggling musician Sean tries to redeem himself in the eyes of bride-to-be Amy. With his relationship hanging in the balance, he hatches a plan to win her back by writing the perfect album of songs, with help from his misfit bandmates. (Celebrating Hollywood)

A STAR FOR ROSE, Daniel Yost, USA (World Premiere)
Three lost souls, homeless on Hollywood Boulevard’s Walk Of Fame, meet in conflict, then slowly bond together to find meaning, humor and joy in their lives. Rose (Debbie Allen), 50, an African-American woman who lost her child, becomes a surrogate mother to Marcy (Tara Walker), 20, new in town and living out of her car, naively thinking she can make it tap dancing on Search For A Star. Mort (John Savage), 50, a Gulf War vet in a wheelchair, brings chaos and excitement, while certain that the Shadow Government is out to get him. (Celebrating Hollywood)

WIENER DOG NATIONALS, Kevan Peterson, USA
A family adopts a runt of a dachshund from a shelter. Only time will tell if little “Shelly” and her new family are up for the challenges of entering the nation’s greatest wiener dog race, Wienerschnitzel’s “Wiener Dog Nationals.” One Nation, one race, one wiener.

YOU’LL BE A MAN (TU SERAS UN HOMME), Benoit Cohen, France
Leo is 10 and wise beyond his years. A solitary dreamer who seeks refuge in books. When the carefree 20-year-old Theo steps into his life, it forces Leo out of his shell. Despite their age difference, the two become best friends, helping each other face up to their responsibilities.

BLOOD BROTHER, Steve Hoover, USA
The unmistakable power of love is celebrated in this story of one man’s decision to move to India and restart his life among the dispossessed. “Rocky Anna,” as the children living at an orphanage for those infected with HIV know him, was dissatisfied with his life in America. Having grown up without a close-knit family of his own, he found his calling– living and working with kids in need. Unlike others who simply passed through their lives, Rocky stayed, dedicating himself to their health and well-being. Despite formidable challenges, his playful spirit and determination in the face of despair proves to be an invaluable resource. (CineCause Spotlight)

DREW: THE MAN BEHIND THE POSTER, Erik P. Sharkey, USA (World Premiere)
“Drew: The Man Behind The Poster” is a story of artist Drew Struzan, whose most popular works include the iconic “Indiana Jones,” “Back to the Future,” and “Star Wars” movie posters. Featuring exclusive interviews with George Lucas, Harrison Ford, Michael J. Fox, Frank Darabont, Guillermo del Toro, Steven Spielberg and many other filmmakers, artist and critics. (Celebrating Hollywood)

FINDING HILLYWOOD, Chris Towey, Leah Warshawski, USA
A unique and cinematic documentary about the very beginning of Rwanda’s film industry and a real-life example of the power of cinema to heal a man and a nation. (Celebrating Hollywood)

A FRAGILE TRUST: PLAGIARISM, POWER, AND JAYSON BLAIR AT THE NEW YORK TIMES, Samantha Grant, USA
“A Fragile Trust” tells the shocking story of Jayson Blair, the most infamous serial plagiarist of our time, and how he unleashed the massive scandal that rocked the New York Times and the entire world of journalism.

FRIENDS OF MINE, Matthew Palmer, USA (World Premiere)
“Friends of Mine” is a documentary about two young men who do community service work at a summer camp for individuals with developmental disabilities. This is the story of how it changes their lives. Given the chance to be who they truly are, they’ll never be the same again. (CineCause Spotlight)

FUREVER, Amy Finkel, USA
“FUREVER” is a quirky feature-length documentary that explores the human-animal bond and the dimensions of grief people experience over the loss of a pet. It examines our inability to let go of our beloved creatures, and the many processes by which we’re able to preserve more than merely their memories. (Celebrating Hollywood)

LITTLE HOPE WAS ARSON, Theo Love, USA
January 2010: In the buckle of the Bible Belt, 10 churches burn to the ground in just over a month igniting the largest criminal investigation in East Texas history. No stone is left unturned and even Satan himself is considered a suspect in this gripping investigation of a community terrorized from the inside-out. Families are torn apart and communities of faith struggle with forgiveness and justice in this incredible true story.

MILE, MILE & A HALF, Jason Fitzpatrick, Ric Serena
In an epic snow year, five friends leave their daily lives behind to hike the 219 mile John Muir Trail in 25 days while capturing the amazing sights and sounds they encounter along the way. They learn it is about the journey, not the destination. Come walk with us.

THIS AMERICAN JOURNEY, Paul Blackthorne, USA
British actor, Paul Blackthorne, and Australian photographer, Mister Basquali, head out across the United States to discover from everyday people what it means to be an American today. Along the way, our awkward duo finds inspiration and wisdom in unlikely places, and rekindles their love for America.

TINY, Christopher Smith, Merete Mueller
What is home? And how do we find it? One couple’s attempt to build a “Tiny House” from scratch with no building experience raises questions about sustainability, good design, and the changing American Dream. (CineCause Spotlight)

WALKING THE CAMINO, Lydia B. Smith, Spain
“Walking the Camino” follows six determined strangers on a life-changing journey across Spain. Whatever their motivation, no one can predict just how their paths will unfold, what personal demons or angels they will face, or what transformations they will undergo by trail’s end.

Animal Cruelty Doc THE GHOSTS IN OUR MACHINE To Open in NY Nov 8, LA Nov 15 | TRAILER