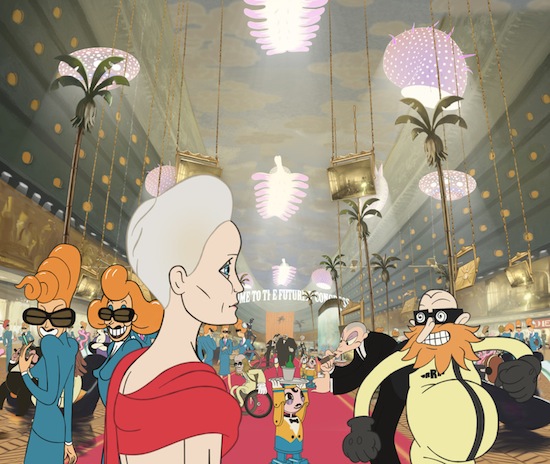 THE CONGRESS, directed by Ari Folman (Academy Award-nominated Waltz With Bashir), will be featured as the opening film at the ninth Giant Incandescent Resonating Animation Festival (GIRAF) in Calgary, Alberta, Canada. A science- fiction parable about identity and celebrity that blends live action sequences with fantastic hand-crafted animations, The Congress stars Robin Wright as herself, and also features Harvey Keitel, Jonn Hamm and Paul Giamati.

In addition to the screenings and parties, GIRAF also brings artists at the forefront of the global animation community to attend the festival and share their expertise with local artists and audiences. This year, there will be two international animators providing workshops at the festival — Peter Burr and Mikey Please. Burr, a video artist who also runs underground video label Cartoon XPrez, will be presenting Special Effect, a live television show inspired by Andrei Tarkovsky’s 1971 film Stalker, and featuring contributions from 18 animators, including Calgary’s Chad Van Gaalen. Please is the acclaimed British stop-motion animator whose Marilyn Miller recently received the McLaren Award at the Edinburgh Film Festival. His thesis film was the BAFTA-winning and Academy Award-shortlisted The Eagleman Stag.

GIRAF will launch its 2013 festival on Wednesday, November 6th at the Globe Cinema; and continue through Sunday, November 10, offering five days of hands-on workshops, parties, and screenings, with five feature film presentations, two international shorts packages, a spotlight on France, a Canadian shorts package, a late night pack, an artist spotlight and our annual Log Driver’s Waltz party at the Jubilee Auditorium. The festival has  increased the programming from 35 shorts last year to 85 this year, and will host the world premiere of Disney veteran Steve Moore’s latest short, CHIEF, YOUR BUTT’S ON FIRE!