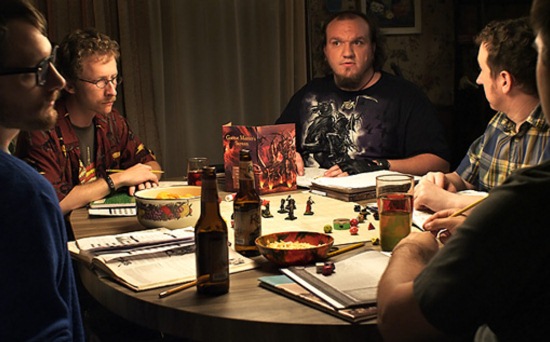 So much conflict comes out of the struggle for power, even regarding the smallest stakes possible.  ZERO CHARISMA is a film about struggles regarding what might seem like small stakes to an outside viewer, but to the characters involved it is literally an epic struggle between a “hero” and his nemesis.

Zero Charisma is about Scott (Sam Eidson), an overweight, pasty-white thirty-something Texan whose life revolves around his weekly role-playing game sessions with his friends.  As the writer of the game the group has played weekly for years and the gamemaster, Scott is fueled by the power he holds over his friends, which is held in place by his friends’ timid natures and Scott’s proneness of nerd rage when someone displays even a hint of an attitude that he finds disagreeable.  For instance, when one of his friends, Kenny (Jeff Fenter) explains that his wife is pressuring him to stop playing, Scott is furious.  Kenny says to Scott, “I don’t think you’d understand. You’ve never even had a girlfriend.”  Scott, completely unconvincingly, answers angrily, “Yeah, because I don’t like to be tied down! How many times to I have to say that?”  The only thing that rings true of that answer is that Scott is obsessed with controlling his little corner of the universe, even if it means he still lives with his grandmother (Anne Gee Byrd) and works at Donut Taco II because he was fired from his job at the local game shop (it’s only temporary, he insists).  After all, at least he has control of the game.

Once Kenny leaves the game Scott and his friends need to find a replacement, and soon Miles (Garrett Graham) joins the group.  However, unlike Scott and his friends Miles is a hipper, cooler “nerd” who immediately wins over Scott’s crew… all except for Scott, who instantly feels threatened.  Scott’s fellow players, stuck with him for so long, are relieved to meet someone who makes being geeky seem socially acceptable.  As this is going on, Scott’s life at home also begins to unravel, with his estranged mother (Cyndi Williams) returning to the fold and revealing exactly why Scott has so many pent-up personality issues.

When I first started watching Zero Charisma I thought it was funny, but felt it was punching an easy target.  Edison’s Scott is the epitome of the nerd stereotype that was already ancient by the time Comic Book Guy joined the cast of The Simpsons and also resembles (physically and emotionally) a grown-up Eric Cartman.  But gradually directors Katie Graham and Andrew Matthews (Matthews also wrote the screenplay) fold back the layers of Scott and reveal the psychological issues that have kept him in a state of arrested development.  Scott is so obsessed with controlling his game because it’s literally the only thing in his life that he has control over.  So once he sees that he’s losing that, his mental unraveling is understandable and, in many ways, suspenseful.  After all, Scott is already convinced everyone is out to ruin his life and has a short temper – what will hold him back when his life (no matter how “pathetic”) actually does begin to fall apart?

Most of the talent involved with Zero Charisma are working on their first feature film (this is the first time both Graham and Matthews have directed a film), and in some ways it has a rough rookie edge to it.  Some of that is endearing because it lends to how socially awkward the lead characters are, particularly Scott, but it would be hard to not enjoy Zero Charisma as a kind of twisted, realistic take on the quirky, nerdy archetype Napoleon Dynamite character that has been seen in indie movies so many times in recent years.  With that in mind, even a handful of rookie hiccups can’t distract from what is probably the most honest film about nerd stereotypes I’ve seen.

The beauty of Zero Charisma is its exploration of the role our imagination plays in the way we perceive the world around us.  For Scott, every conflict is a war between good and evil on a medieval battlefield, with his handsome warrior alter ego always on the side of good.  Audiences might find that laughable, but that perception isn’t far off from the way most of us see ourselves in our struggles against the conflicts in our own lives.  By making Scott so stereotypical, the filmmakers and Eidson reveal how deceiving that stereotype really can be.

Synopsis:
As the strict Game Master of a fantasy role-playing game, Scott (Sam Eidson) leads his friends in a weekly quest through mysterious lands from the safety of his grandmother’s kitchen. But his mastery of his own domain starts to slip — along with everything else in his life — when neo-nerd hipster Miles (Garrett Graham) joins the game, winning over the group with his confident charm and dethroning Scott with an unexpected coup. Caught in delusions of grandeur, Scott must roll the dice and risk everything to expose Miles as the fraud he believes him to be. A darkly comedic fable of epic proportions, Zero Charisma is an ode to nerds from every realm.