Cinema By The Bay 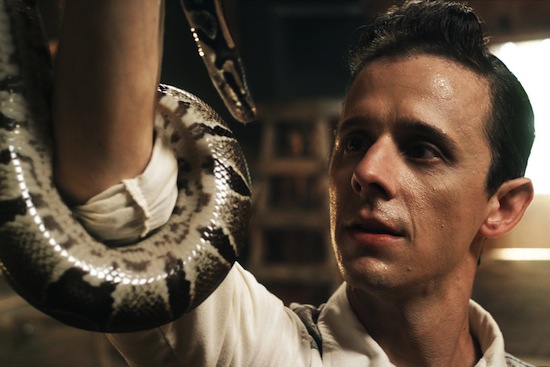 The San Francisco Film Society announced the program for the fifth annual Cinema by the Bay festival, taking place November 22 to 24, 2013, at the Roxie Theater. CBTB celebrates the local film scene by presenting interesting new works made in or about the Bay Area, providing an opportunity for audiences to engage with local filmmakers, and honoring the cinematic luminaries who make San Francisco such a wonderful place to love movies.  The 2013 edition of Cinema by the Bay opens on Friday November 22nd, with Mitchell Altieri’s tense thriller HOLY GHOST PEOPLE.

FRIDAY NOVEMBER 22    OPENING NIGHT
7:00 pm HOLY GHOST PEOPLE
Mitchell Altieri (USA 2013)
Mitch Altieri, one half of directing duo the Butcher Brothers, presents this unnerving descent into a cult tucked away in the Appalachian mountains. Charlotte is bent on finding her missing sister and believes that she has joined a church that includes snake handling ceremonies and speaking in tongues. She receives the help of alcoholic veteran Wayne in infiltrating the group, as they pose as initiates in order to gain information on Charlotte’s sister’s possible whereabouts. As they sink deeper into the social structure of the church, stakes, dangers and suspicions are continuously ratcheted up, making for exquisitely tension-filled viewing. Written by Kevin Artigue, Joe Egender, Mitchell Altieri, Phil Flores. Cinematography by Amanda Treyz. With Emma Greenwell, Joe Egender, Brendan McCarthy,. 89 min. Found & Lost Productions, Indie Entertainment, San Francisco Independent Cinema.
9:30 pm Opening Night Party Celebrate the Opening of CBTB at The Lab (2948 16th Street) with hors d’oeuvres and sponsored wine.
9:30 pm Holy Ghost People

SATURDAY NOVEMBER 23
12:00 pm THE GENIUS OF MARIAN
Banker White, Anna Fitch (USA 2013)
In this personal ode to familial ties and legacy, Banker White (Sierra Leone’s Refugee All Stars) chronicles his mother Pam’s struggle with progressive dementia, and the result is a moving portrait of memory and loss. When Pam is diagnosed with early onset Alzheimer’s and it becomes too difficult to continue writing a memoir about her artist mother — Marian Williams Steele, who herself suffered from Alzheimer’s — White films her remembrances as a way to keep her working on the project. Working with codirector Anna Fitch, White has crafted an intimate documentary that is an exploration not only of the devastating effects of illness, but also of two influential and compelling women. Cinematography by Banker White. 84 min. Mirabel Pictures.

2:15 pm REDEMPTION TRAIL
Britta Sjogren (USA 2013)
In this new film by local filmmaker Britta Sjogren, two powerful yet troubled women flee a past that haunts them. The daughter of a murdered Black Panther revolutionary, Tess (LisaGay Hamilton) lives off the grid on a Sonoma vineyard, fiercely detached from all connections. Her hermetic life cracks when she gives reluctant shelter to a desperate young woman, Anna (Lily Rabe). An unlikely alliance forms between the two, where other close relationships have failed — David (Hamish Linklater), Anna’s husband, and John (Jake Weber), Tess’ employer, cannot break through their walls. But the very difference between the two women opens them up to a new vision of themselves and their future. Written by Britta Sjogren. Cinematography by Bradley Sellers. With Lily Rabe, LisaGay Hamilton, Jake Weber, Hamish Linklater. 92 min. Dire Wolf.

4:30 pm AMERICAN VAGABOND
Susanna Helke (Finland/Denmark 2013)
The burgeoning community of homeless gay youths in San Francisco is dramatically brought to life in Susanna Helke’s poetic and evocative documentary. James and his boyfriend Tyler are desperate to escape the oppressive confines of Chico, CA and James’s disapproving parents. They head westward to the promised land of San Francisco looking for refuge and acceptance, but instead find themselves stranded among other homeless youths struggling to find a community they yearn for. With bewitching shots of San Francisco and poignant voiceover, Finnish director Susanna Helke creates a heartbreaking depiction of the tragic consequences that result when dreams and illusion collide with reality. Cinematography by Marko Luukkonen, Editor Niels Pagh Andersen, Music Samuli Kosminen. 86 min. Finnish Film Foundation.

6:45 pm ALONG THE ROADSIDE
Zoran Lisinac (Pored Puta, USA/Serbia 2013)
In a moment of panic, Varnie, a San Francisco-based graphic designer, flees his stable life and career when his girlfriend reveals to him that she is pregnant. As he makes his way out of town towards southern California, he crosses paths with Nena, an untethered German tourist who has just missed seeing her favorite band live. When she learns that their next show will be down south, Nena convinces Varnie that she needs his help, and he grudgingly takes her along. As they interact on the road, their initial facades — Nena, the carefree, hippy-ish tourist; Varnie, the emotionally closed-off careerist — give way to deeper reflections on their complicated personalities and differences. Written by Zoran Lisinac. Cinematography by John Honoré. With Angelina Häntsch, Iman Crosson, Lazar Ristovski, Michael Madsen. 108 min. In English, Serbian, Spanish and German with subtitles. Metakwon Filmworks.

9:30 pm Street Smarts: YAK Films’ Dance Then and Now
YAK Films is an international media production team whose work with urban dance began with the legendary Turf Feinz crew in Oakland, CA, innovators of the Turf dancing style. Today, YAK is synonymous with a unique style of street-based documentation of the global dance movement, and is one of the most important teams in the world dedicated to giving voice and representation to alternate forms of expression through video, music and dance. This shorts program will trace YAK’s origins in the Bay Area and present some of their newest, unseen international works. With YAK and dance crew members in person to present their work, this program promises to inspire. TRT 75 min.

SUNDAY NOVEMBER 24
12:00 pm The SF State of Cinema: Shorts from SFSU Alumni
Dating back nearly half a century, the Cinema Department at San Francisco State University is an enduring educational institution that has played a critical role in defining both the history and the future of cinema in the Bay Area. Founded in the 1960s during a time of great political activism and artistic experimentation, the SFSU film program has spawned several generations of filmmakers — undergrads and grad students alike — who form the very backbone of the local film community, as nationally renowned filmmakers, curators, and professors. This program of short films made by SFSU alumni barely scratches the surface of the great work — and great artists — being fostered amidst the fog at the end of 19th Avenue. TRT 81 min.

2:15 pm THE OTHER SIDE OF THE MOUNTAIN
In Hak Jang (North Korea/USA 2012)
The first U.S./North Korea coproduction ever, this film is a dazzling, epic melodrama depicting the relationship between a South Korean man and a North Korean woman separated by political conflict. During the Korean War, a young nurse in a small town in North Korea saves a wounded Southern soldier abandoned by his platoon. Forced to hide his identity, the two gradually form a furtive attachment until he is forced to return to his home in South Korea. Featuring opulent set design and punctuated with glorious musical numbers, this is a startlingly original feature debut from director In Hak Jang and local writer/producer Joon Bai. Written by Joon Bai. Cinematography by Ryong Su Han. With Hyang Suk Kim, Ryung Min Kim, Jung Taik Park. 106 min. In Korean with subtitles, Transwestern Pictures.

7:00 pm THE ILLNESS AND THE ODYSSEY
Berry Minott (USA, 2013)
Local filmmaker Berry Minott takes us on an epic journey to find the cause — and perhaps the cure — of Alzheimer’s, Parkinson’s, ALS and other neurological disorders. Her investigation begins on the Pacific island of Guam, where following the end of WWII, the indigenous Chamorro people were afflicted with Alzheimer’s-like symptoms from a disease called Lytico-Bodig. For years renowned scientists descended on this small village to detect the source of this mysterious illness — was it hereditary, environmental or dietary? This engaging and edifying documentary features rare archival footage and candid interviews with author/neurologist Oliver Sacks, New Yorker columnist Jonathan Weiner and many other noted scientists. Cinematography by Burt Sardoma. 75 min. Berry Minott Productions.

9:15 pm DEAR SIDEWALK
Jake Oelman (USA 2013)
Gardner, a 24-year old mailman, fantasizes about life beyond the tedium of the sidewalks beneath his feet. We see this play out in comic interludes — about finding the perfect woman, achieving the perfect life or becoming the hero of his own epic tale. But, paralyzed by possibility and fear, he adheres to the comfort of his routine, rigidly cultivating obsessions that keep him in his small-but-safe world. This all changes when Gardner meets Paige, a newly relocated divorcee on his route, and Gardner’s quarter-life crisis collides with Paige’s mid-life one. Written by Jake Limbert. Cinematography by Tom Lembcke. With Joseph Mazzello, Michelle Forbes, Josh Fadem. 87 min. NHO Entertainment-Barcode Films.