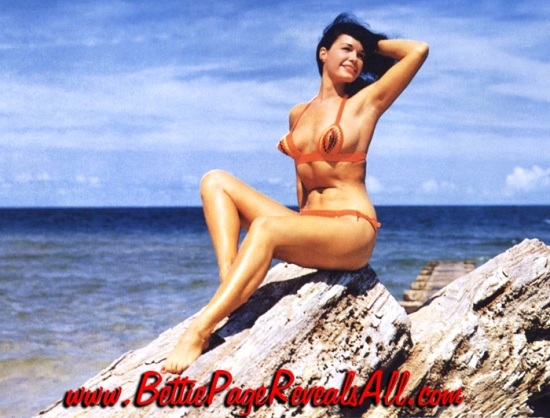 Even if you don’t think you know who Bettie Page is, you know her.  What do I mean by that?  At some point of your life you have seen references to Bettie Page, the most popular pin-up model of the 1950s.  That is because her style and persona has been a constant source of inspiration for decades by nearly every facet of pop culture.  For example, just in the last few months pop star Katy Perry heavily referenced Page’s famed “Jungle Bettie” photo shoot in her artwork and video for her hit single “Roar.”  It’s only one of hundreds of reference to Page’s famed pin-up photography that you probably encounter every year, a phenomenon that continues today (Bettie Page is one of the highest-earning deceased celebrities).  In the new documentary Bettie Page Reveals All, the pin-up legend herself narrates her life story, revealing once and for all what the woman behind those photos was like and what happened to her after disappearing from modeling seemingly overnight in 1957.  It’s an absorbing look at the life of an iconic woman, one many of us know little about beyond her photos.  While this is the first film documentary that Mark Mori has directed since 1991’s Building Bombs (which was nominated for the Best Documentary Feature Oscar in 1991) and writer Doug Miller is film newcomer, the pair have created a loving in-depth portrait of Page with this documentary.

Of course, Bettie passed away in 2008 (the documentary opens with scenes from her funeral), but the narration was recorded several years before her death and covers her entire life from her troubled childhood, her early days as a model, becoming an icon, and ultimately what happened to her after she retired from modeling after only seven years as a model.  Though elderly Bettie’s voice is sometimes difficult to understand, her voice is filled with nothing but joy about her pin-up days. 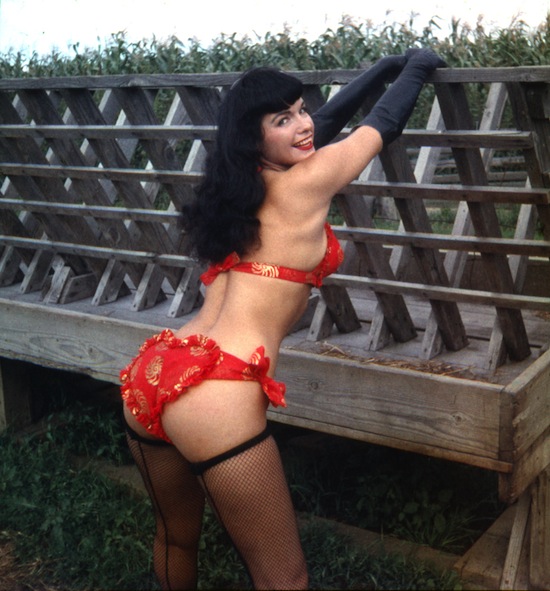 Naturally, the most interesting parts of the documentary are the ones that focus on her pin-up modeling, but the additional focus on the controversy surrounding her later bondage photos and films and the mysteries surrounding her disappearance from the public eye – Page made few public appearance after retiring in 1957 – makes this documentary so unique.  It’s also wonderful to hear Page speak with bewildered amazement about her return to popularity in the 1980s and the rediscovery of her existence in the early 1990s.

The narrative is also expanded with interviews with admirers like Dita Von Teese, friends like Hugh Hefner, and many of Page’s former photographers.  The interviews with the photographers are particularly interesting because they go into detail about the composition of their shots.  To them, they weren’t simply taking pin-up photos of a bikini-clad (or even nude) Page, they were creating art.  It’s hard to argue against them — decades later, Page’s beauty is still remarkable because she was the definition of photogenic. The fact that Page talks so happily about those years makes it clear that she was born to be a pin-up icon.

Fans of Page will undoubtedly enjoy Bettie Page Reveals All and because it’s told in her own voice even diehards will likely learn something about her that they didn’t know.  There are probably many photos and rare clips from Page’s burlesque movies in the documentary that even devoted fans of Page haven’t seen. However, people who know little about Page and her remarkable career will get the most out of this documentary.  If nothing else, it’s impossible not to enjoy one of the most beautiful women of the twentieth century posing in various states of undress relishing in her contribution to the sexual revolution, even if she didn’t realize it yet.

OPENING in NYC 11/22 at the Village East Theater