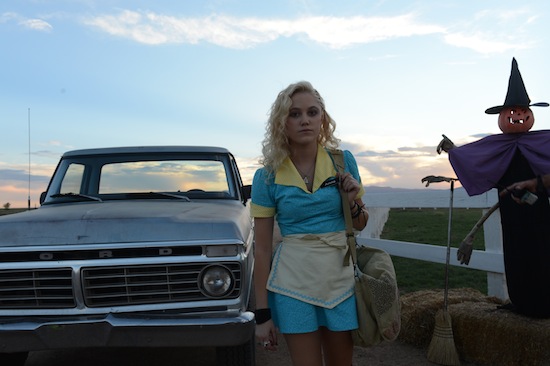 The South by Southwest (SXSW) Film Conference and Festival taking place March 7 to15, 2014, in Austin, Texas, unveiled the films in the Midnighters section, and the short film lineup.This year’s Midnighters sections includes eight world premieres, and one U.S. premiere including  STAGE FRIGHT, the feature film debut of writer/director Jerome Sable, and Adam Wingard’s THE GUEST which premiered earlier this year at the Sundance Film Festival.

After horror favorites Inside and Livid, Maury and Bustillo pair up again for a horror-thriller at the cross roads between Stand by Me and Friday the13th.
Cast: Anne Marivin, Béatrice Dalle, Francis Renaud, Fabien Jegoudez, Nicolas Giraud (World Premiere)

Five friends on a camping weekend in the remote woods of East Texas struggle to survive against a legendary beast that is stronger, smarter and more terrifying than they would have ever believed exists.
Cast: Chris Osborn, Dora Madison Burge, Roger Edwards, Denise Williamson, Samuel Davis (World Premiere)

A soldier on leave befriends the family of a fallen comrade, only to become a threat to all around him when it’s revealed he’s hiding dangerous secrets from his past.
Cast: Dan Stevens, Maika Monroe, Leland Orser, Lance Reddick, Sheila Kelley

When a realtor is asked to sell a vacant home, she and her sister cross paths with its previous tenant: a teenage girl who sold her soul to the devil.
Cast: Naya Rivera, Catalina Sandino Moreno, Ashley Rickards, Wyatt Russell, Ava Acres (World Premiere)

When deadly attacks from the forests beset a secluded retirement community, it is up to a grizzled veteran to figure what the residents are hiding.
Cast: Nick Damici, Ethan Embry, Erin Cummings, Tom Noonan, Lance Guest (World Premiere)

In the city of dreams, a desperate actress will do whatever it takes for the role of a lifetime… no matter what the cost.
Cast: Alexandra Essoe, Amanda Fuller, Fabianne Therese, Noah Segan, Shane Coffey (World Premiere)