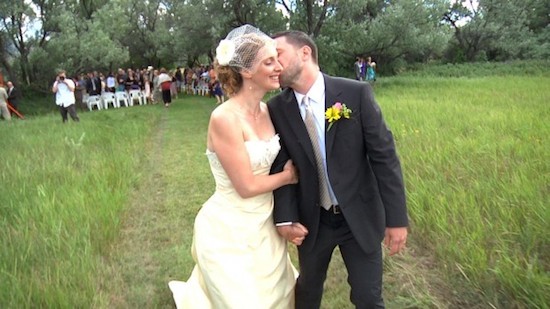 “112 WEDDINGS,” an HBO Documentary Film, is a heartwarming examination of the struggles and joys that come with lifelong partnership. After two decades filming weddings part-time, acclaimed director Doug Block (“51 Birch Street,” “The Kids Grow Up”) revisits couples years after the big day in order to see how love and life have unfolded after vows.

Block said, “Among filmmakers, Full Frame is the country’s most revered documentary film festival, so it’s a particular honor to be chosen as this year’s Opening Night Film. ‘112 Weddings’ is a thought-provoking film about love and marriage, and I’m hoping it will get the festival off to a rousing, celebratory start.”

One of the nation’s premier documentary film festivals, Full Frame celebrates its 17th annual festival this April. Full Frame is a qualifying event for consideration for the nominations for both the Academy Award® for Best Documentary Short Subject and the Producers Guild of America Awards.

112 Weddings (Director: Doug Block)
Documentary filmmaker and part-time wedding videographer Doug Block tracks down couples he’s filmed over the years, contrasting past with present to see how love and life have unfolded after vows. World Premiere

Afternoon of a Faun: Tanaquil Le Clercq (Director: Nancy Buirski)
Tanaquil Le Clercq inspired choreographers unlike any ballerina before her, but in 1956, at the height of her fame, she was stricken with polio. A mesmerizing film of love, loss, and surprising grace.

Alive Inside: A Story of Music & Memory (Director: Michael Rossato-Bennett)
When a social worker discovers that music can unlock the memories of patients whose minds are clouded by dementia, he embarks on a mission to transform lives one iPod at a time.

The Battered Bastards of Baseball (Directors: Chapman Way, Maclain Way)
A celebratory portrait of the Portland Mavericks, who joined the minor leagues in 1973 as the lone single-A team without a major-league affiliation.

The Case Against 8 (Directors: Ben Cotner, Ryan White)
This behind-the-scenes film, shot over five years, follows the unlikely team who fought to overturn California’s ban on same-sex marriage, and won.

E-Team (Directors: Katy Chevigny, Ross Kauffman)
Four fearless activists from the Human Rights Watch’s Emergency Team take us to the frontlines of Syria and Libya as they investigate and document war crimes.

The Green Prince (Director: Nadav Schirman)
A real-life thriller about the complex relationship between a Palestinian spy and his Israeli Shin Bet handler.

Ivory Tower (Director: Andrew Rossi)
Is a college degree worth the price? This sweeping examination of higher education questions the value of college in an era of rising tuition costs and staggering student debt.

Last Days in Vietnam (Director: Rory Kennedy)
Historical footage and reflections by U.S. diplomats and soldiers transport us to Saigon in April 1975 and the moral quandaries surrounding the order to evacuate American citizens only.

The Missing Picture (Director: Rithy Panh)
This deeply poetic and personal document uses hundreds of clay figurines—as so few photos exist—to recreate events and validate memories of the atrocities committed by the Khmer Rouge in Cambodia.

No More Road Trips? (Director: Rick Prelinger)
Compiled from hundreds of home movies to create a dream ride across 20th-century America, this mixtape’s soundtrack and narration is provided by the audience.

One Cut, One Life (Directors: Lucia Small, Ed Pincus)
Two filmmakers undertake the making of a very personal documentary when one of them is diagnosed with a terminal illness, approaching matters of life and death with profound honesty. World Premiere

Supermensch (Director: Mike Myers)
As entertaining as it is heartfelt, this star-studded film celebrates the adventurous life of talent manager, producer, and dealmaker extraordinaire Shep Gordon.

Through a Lens Darkly: Black Photographers and the Emergence of a People(Director: Thomas Allen Harris)
This invaluable document is a journey through the African American family photo album: its political, social, and artistic history; its stories of loss, self-invention, community, and beauty.

Apollonian Story (Directors: Ilan Moskovitch, Dan Bronfeld)
A modern hermit has spent the last 40 years single-mindedly carving a home out of a Mediterranean cliff. When his estranged son comes to help, the pair must navigate long-standing tensions. North American Premiere

Book of Days (Director: Ian Phillips)
Filmed over seven years, this fascinating short follows an enigmatic artist and bookseller as he struggles to get his book, Hannibal Barca, published. World Premiere

Born to Fly (Director: Catherine Gund)
“Action architect” Elizabeth Streb choreographs performances that push the human body to extremes in this exhilarating portrait of Streb and her company of dancers as they take to the air.

Bronx Obama (Director: Ryan Murdock)
An unemployed Puerto Rican father chases the “look of a lifetime” when he realizes he bears an uncanny resemblance to our 44th president.

Can’t Stop the Water (Directors: Rebecca Ferris, Jason Ferris)
Abandoned homes line the one road of the disappearing Isle de Jean Charles in Louisiana, home to a Choctaw community. This is the story of those who’ve stayed.

CAPTIVATED: The Trials of Pamela Smart (Director: Jeremiah Zagar)
In telling the story of the first fully televised trial in the U.S., this incisive, multilayered film looks at how mass-media coverage and sensationalism impact the workings of justice.

The Case of the Three Sided Dream (Director: Adam Kahan)
Rahsaan Roland Kirk, an extraordinary musician who preferred the term “black classical music” to “jazz,” lived in a world of sound and dreams—and action.

The Chaperone (Directors: Fraser Munden, Neil Rathbone)
Charm and surprise characterize this animated story of a fight that breaks out between chaperones of a middle-school dance and a biker gang.

Evolution of a Criminal (Director: Darius Clark Monroe)
Ten years after robbing a bank as a teenager, filmmaker Darius Monroe returns home and turns the camera on himself—to tell the story of what happened and look at the fallout from his actions

Fairytale of the Three Bears (Director: Tristan Daws)
Three hardworking men recall the story of the “Three Bears” as they muse on their lives in post-Soviet Russia. North American Premiere

Flowers from the Mount of Olives (Director: Heilika Pikkov)
Mother Ksenya, an 83-year-old nun in a convent in Jerusalem, reflects on her remarkable life as she embarks on one final challenge: silence. North American Premiere

The Great Invisible (Director: Margaret Brown)
A chilling investigation of the Deepwater Horizon oil spill through the stories of people still experiencing its aftereffects, from oil executives to Gulf Coast residents—long after the media moved on.

Hacked Circuit (Director: Deborah Stratman)
A single suspenseful shot takes us inside the art of aural illusion and reveals that all is not as it seems or sounds.

The Hand That Feeds (Directors: Rachel Lears, Robin Blotnick)
A group of NYC restaurant workers stand up for their rights, despite the threat of job loss and deportation, in this moving story of a bitter labor dispute. World Premiere

Happy Valley (Director: Amir Bar-Lev)
This compelling look at Penn State’s football scandal goes beyond the surface of spectacle to get at the heart of the responses of an impassioned community.

In Country (Directors: Mike Attie, Meghan O’Hara)
The lines between what’s real and what’s pretend blur as members of a platoon of Vietnam War re-enactors go to battle, each for their own complicated reasons.  World Premiere

Monk with a Camera (Directors: Guido Santi, Tina Mascara)
Nicky Vreeland trades in his rarified high-society existence for a Tibetan Buddhist monk’s maroon robes. Luckily, he brings his camera along.

Olga – To My Friends (Director: Paul Anders Simma)
A young woman living alone on a reindeer herding post 1,000 miles north of Moscow contemplates solitude and purpose, and what she will do if the post is shut down. North American Premiere

The Overnighters (Director: Jesse Moss)
The unintended consequences of good intentions become evident when a pastor in an oil boomtown opens his doors to desperate and disillusioned jobseekers.

A Park for the City (Director: Nicole Macdonald)
Surveillance cameras give us a Night at the Museum look inside Detroit’s abandoned zoo on Belle Isle, a no-man’s land of flora and fauna reverting to wilderness.

Private Violence (Director: Cynthia Hill)
“Why didn’t you leave?” This urgent and inspiring film follows two women’s complex stories of survival while exploring the way we talk about and deal with domestic violence as a society.

Return to Homs (Director: Talal Derki)
This film takes us to the frontlines of the Syrian Civil War as two friends who are determined to defend their city abandon peaceful resistance and take up arms, heading straight for the heart of the warzone.

Santa Cruz del Islote (Director: Luke Lorentzen)
On this remote island, the most densely populated on the planet, a community struggles to maintain their way of life as resources and opportunities dwindle. World Premiere

Seeds of Time (Director: Sandy McLeod)
As humans face a “perfect storm” of disastrous scenarios, scientist Cary Fowler demonstrates the importance of biodiversity by developing seed banks across the globe.

Sex(Ed) The Movie (Director: Brenda Goodman)
Remember the first time you heard about sex? Through clips from film and TV archives, this hilarious, humbling film takes a look at our country’s earnest attempts to share the facts of life.

The Silly Bastard Next to the Bed (Director: Scott Calonico)
JFK handles a scandal over some pricey bedroom furniture in the last summer of his presidency. World Premiere

Ukraine Is Not a Brothel (Director: Kitty Green)
The women of FEMEN, the provocative topless feminist movement in the Ukraine, confront the power structure fueling their organization.

Where is My Son? (Director: Qu Zhao)
Abandoning a successful career in the big city, JunKyo Lee returns home to care for his ailing mother in her final years. North American Premiere

White Earth (Director: J. Christian Jensen)
Against the backdrop of an ethereal North Dakota winter, three children and their immigrant mother describe scenes of isolation and exertion—the impact of the oil boom on their everyday lives.