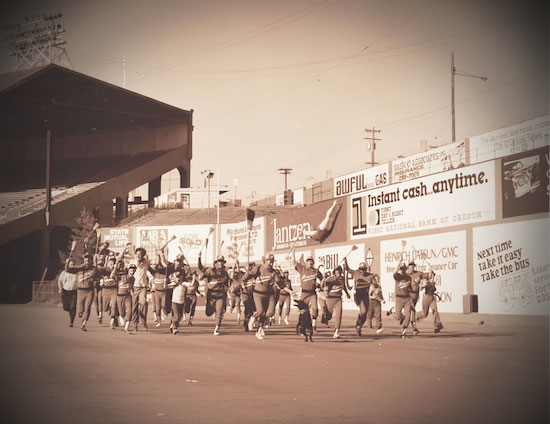 THE BATTERED BASTARDS OF BASEBALL by Chapman Way and Maclain Way

Four films previously announced in the Invited Program will exhibit as Center Frame screenings in the Fletcher Hall of the Carolina Theatre: “Afternoon of a Faun: Tanaquil Le Clercq” by Nancy Buirski, “The Case Against 8” by Ben Cotner and Ryan White, “E-Team” by Katy Chevigny and Ross Kauffman, and “Ivory Tower” by Andrew Rossi.

Filmmakers and subjects from the films will participate in extended conversations after the Center Frame screenings. Special guests include legendary classical dancer Jacques d’Amboise of “Afternoon of a Faun: Tanaquil Le Clercq;” Kris Perry and Sandy Stier, two of the plaintiffs featured in “The Case Against 8;” and Carroll Bogert of Human Rights Watch, who appears in “E-Team.”

The 2014 Garrett Scott Documentary Development Grant, now in its eighth year, has been awarded to James Demo for “The Peacemaker” and RaMell Ross for “Hale County.” Grant organizers will join the filmmakers in presenting short excerpts from their works-in-progress prior to the World Premiere screening of “In Country” by 2013 recipients Mike Attie and Meghan O’Hara. The grant is awarded in honor of filmmaker Garrett Scott, who made a distinctive mark in the documentary genre during his brief career. It recognizes first-time filmmakers who, like Scott, bring a unique vision to the content and style of their documentary films.

The Southern Documentary Fund is screening in-the-works excerpts from “Old South” by Danielle Beverly and “Trapped” by Dawn Porter. The screenings will be followed by a moderated conversation with the filmmakers. SDF: In-the-Works provides Southern filmmakers the opportunity to receive feedback from a dedicated assembly of their peers and serious documentary enthusiasts.

In addition to the Closing Night Film, Full Frame 2014 will feature 4 Free Screenings. The festival will continue its tradition of showing free films Friday and Saturday nights. Two fan favorites from last year’s festival will each screen twice, once indoors at the Full Frame Theater in the Power Plant at American Tobacco and once outdoors at Durham Central Park: Ryan White’s “Good Ol’ Freda” and Patrick Creadon’s “If You Build It.” Food Truck Roundups will precede the Durham Central Park showings on Friday and Saturday nights. All Free Screenings at the festival are presented by PNC.

The complete schedule of events, along with film descriptions, can be viewed online at www.fullframefest.org.

CENTER FRAME – Friday, April 4 at 4:40pm
Afternoon of a Faun: Tanaquil Le Clercq (Director: Nancy Buirski)
Tanaquil Le Clercq inspired choreographers unlike any ballerina before her, but in 1956, at the height of her fame, she was stricken with polio. A mesmerizing film of love, loss, and surprising grace.

CENTER FRAME – Saturday, April 5 at 4:40pm
Ivory Tower (Director: Andrew Rossi)
Is a college degree worth the price? This sweeping examination of higher education questions the value of college in an era of rising tuition costs and staggering student debt.

The Peacemaker (Director: James Demo)
The Peacemaker follows Padraig O’Malley into conflict zones as he works a peacemaking model based on his recovery from addiction.

Trapped (Director: Dawn Porter)
Dr. Willie Parker is one of the only physicians willing to provide abortion care at clinics in Alabama and Mississippi. But when new state laws effectively ban him from practice, these clinics must fight to stay open.