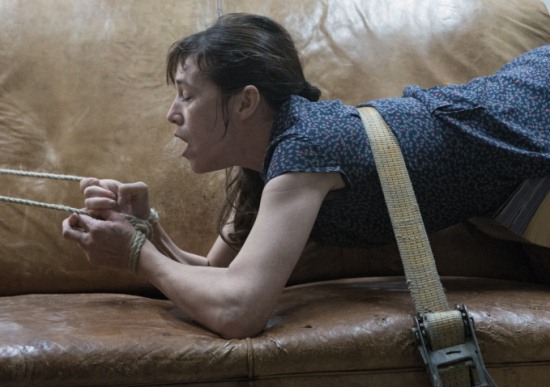 Lars von Trier’s Nymphomaniac: Vol 2, picks right up where Nymphomaniac, Vol 1 left off: the Young Joe (Stacy Martin) is in the midst of her relationship with her once long lost true love, Jerôme (Shia LaBeouf). (Here is my review on Vol 1 here.)

The problem is, the sexually rapacious Joe had, in her own words, “Lost all feeling in my cunt.” Her genuine fillings for Jerome have left her unable to enjoy sexual intercourse with Jerôme. They keep trying unsuccessfully to get Joe off, until finally, an exhausted Jerôme declares that she’s like a wild animal, and well, he needs some “help with the feeding.”

Permitting her to seek out others so she may seek the satisfaction she so craves, the young Joe suddenly, in the next scene, morphs into the 50-year old Joe (Charlotte Gainsbourg, who has been narrating since Volume 1) now sleepily pushing a baby stroller through a park, an infant boy asleep inside.  The scenes also cut back to the present, with Joe talking and hashing over incredible and risqué life story to Seligman (Stellan Skarsgard), whom we also learn some very interesting, though none too surprising, personal information about.

Von Trier is indicating, in no small way, that Joe is not into, or going to, change: This is who she is, for better or worse. And it doesn’t take her long, through some strange word-of-mouth that I cannot fathom, for her to find the sadomasochistic K. K has a basement sort of office, where women wait sometimes for hours on end just to be (very) badly ministered by him. And this is no 50 Shades of Grey light BDSM, no sir: This is brutal, if not for the raw nature of the emotions, or lack thereof, on display. (K is also played by none other by Jamie Bell, of Billy Elliot fame, adding to the delicious weirdness and sterility of it all.)  When an almost near fatal occurrence happens when she is off to one of her appointments with K, Jerôme threatens to leave with her son, never seeing her again, if she continues.

From here, the film veers into a strange, almost hallucinatory silly sort of strata, wherein Joe takes on a completely different, and rather criminal, profession, and decades seem to pass before our eyes: At first, I thought this ridiculous, but really, I feel von Trier was hoping to show that it really did not matter what the hell Joe did for a living: Her self-loathing was seeping into every, single aspect of her life, now even her “career.”. L (Willem Dafoe-always a pleasure to see) plays her new, shifty-eyed boss. She even meets and starts an affair with a teenage girl (Mia Goth- startling-looking and a lovely, natural actress) she is ordered by L to “recruit.” This also struck me, at first, as ludicrous, until you realize that she is experiencing love for the second time around, finally and strangely, in a maternal sense.

I am not going to give more away, because this film definitely needs to be experienced without forethought or preconception: All I will say is, I thought this second piece to the grand Volume 1 was an enormous let-down, until- I was on the train going home from the screening. The last scene of the film came back to me then, I realized, I felt it all at once. This is what will happen to you if you cannot connect, he seems to be suggesting: Intimacy itself will feel like the ultimate invasion, preventing you from EVER having a substantial relationship. Joe not only hates herself, but everyone else around her.

Nymphomaniac, (both brilliant films togther)  is about an individual carving something out of an endless need, never finding fulfillment, never even coming close to it, and-in the end- literally ending what could be the only chance for a true emotional connection.

“Fill all my holes” is a phrase desperately whispered by Joe in both films. Just as the line “The secret ingredient to sex is love” is spoken in Vol 1 by one of Joe’s childhood friends, without any irony at all, so, as well, is this one: Joe is begging others to do for her what she cannot. This is not a cultural critique, but a beautiful, astonishing and brutal character study of addiction and pain, one that just may teach you a thing or two about yourself. As I said in my review of Volume 1: Forget all the sex, if it’s “real,” CGI’d, or not. Just go and see Nymphomaniac Vol 2 for the way it will shake you to your very core.