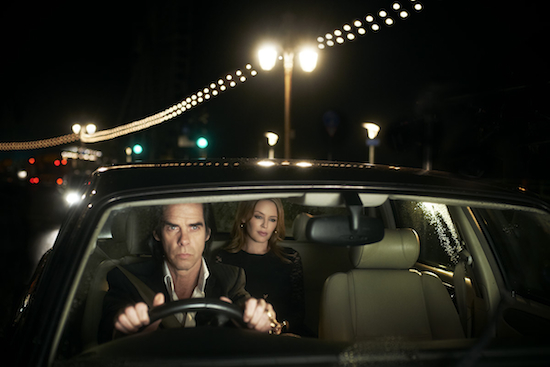 The Australian premiere of 20,000 Days on Earth, described as an innovative film about international cultural icon Nick Cave, will serve as the Opening Night Film of the Sydney Film Festival on Wednesday June 4th, 2014.  20,000 Days on Earth is the first feature-length film by UK visual artists Iain Forsyth and Jane Pollard, and was recently awarded the Directing Award: World Cinema Documentary and the Editing Award: World Cinema Documentary at the Sundance Film Festival 2014.

Drama and reality collide in this extraordinary portrait of musician and cultural icon Nick Cave. Artists Iain Forsyth and Jane Pollard take a fascinating approach in this visually astonishing and highly stylized imagination of Cave’s 20,000th day on Earth, all to a sparkling narration by Cave himself. Through his visits to his archive and a long and revealing session with his therapist, a picture of the artist, his origins, and his creative process is beautifully drawn. The filmmakers also follow Cave into the studio as he writes and records his hit album Push the Sky Away.  Along the way, we witness fascinating and humorous conversations between Cave and his friends and collaborators like Kylie Minogue, Ray Winstone, Blixa Bargeld and Warren Ellis. Capturing Nick Cave and the Bad Seeds live at Sydney Opera House helps reveal the massive impact Cave has and the deep devotion he inspires. Imaginative, intimate, daring and defying easy categorization, 20,000 Days on Earth is not just a scintillating portrait of a visionary artist, but a tremendous work of art in itself.