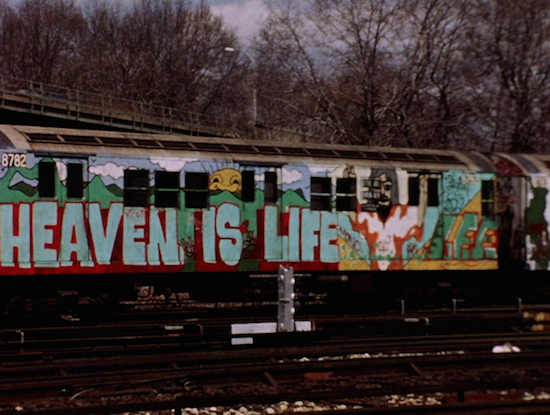 APD’s Cinema Conservancy program announce the upcoming release of Stations of the Elevated (1981), a 45-minute independent documentary directed, produced and edited by Manfred Kirchheimer, in a new restoration. Shot over the course of 1977 on lush 16mm color reversal stock, the film weaves together vivid images of elevated subway trains crisscrossing New York City’s gritty urban landscape. With a complex soundtrack that combines the ambient sounds of the city with the music of Charles Mingus and Aretha Franklin, the film is an impressionistic portrait of and tribute to a New York that has long since disappeared.

On Friday, June 27 BAMCinemaFest will present the world premiere of APD/Cinema Conservancy’s new restoration of Stations of the Elevated on the Steinberg Screen at the BAM Harvey Theater. The event begins with a live performance by legendary jazz ensemble the Mingus Dynasty, the original Charles Mingus legacy band. The first band Sue Mingus organized after Charles’ death in 1979, this acclaimed orchestra continues to interpret Charles Mingus’ more than 300 compositions, and will perform as a prelude to Kirchheimer’s jazz-inflected documentary. Tickets go on sale May 14, 2014 here: http://www.bam.org/film/2014/bamcinemafest2014.

The newly restored version of the film will be released in theaters this fall accompanied by other works by Manfred Kirchheimer.  The restoration process includes both re-mastered image and sound.

Director of Cinema Converancy Jake Perlin stated, “I was hypnotized by Stations from the first time I saw the video cassette, just like the twenty plus times I have seen it since.  When thinking of dream projects for Cinema Conservancy, it was at the top of the list.  Working with Manny to be able to bring the film back to audiences in this beautiful version and have it premiere on the enormous screen in the Harvey, is thrilling!”

“In 1977 when Stations of the Elevated was filmed, illegal graffiti on New York’s subway trains was considered the scourge of the city. Mayors and passengers called it vandalism; attack dogs were let loose to scare and apprehend the perpetrators–kids with names and messages they wanted to ‘get up.’ Today, museums, advertisers and celebrities court the graffiti writers and display their work. With the careful HD restoration of the film, it lives again in all its blazing glory”, said Manfred Kirchheimer.

Among the first-ever documentations of graffiti on film, Stations of the Elevated captures the height of the 1970s graffiti movement in New York, featuring the work of early legends including Lee, Fab 5 Freddy, Shadow, Daze, Kase, Butch, Blade, Slave, 12 T2B, Ree, and Pusher. In a period when the graffiti covering New York’s subway system was largely dismissed as vandalism, with mayor Ed Koch threatening “if I had my way I wouldn’t use dogs, but wolves [to keep writers out of the train yards],” Kirchheimer explored graffiti as a form of self-expression and a reaction to New York’s social and economic conditions, an artistic counterpoint to the “legalized vandalism” dominating the city’s visual landscape in the form of corporate advertising. Juxtaposing the colorful imagery of ‘tagged’ cars with shots of carefully hand-painted billboards depicting hamburgers and bikini-clad women, Stations of the Elevated forces audiences to ask: “What is urban art, and what role does it play in the daily life of a city?”

The film premiered at the 1981 New York Film Festival, but lacking appropriate music licenses, Stations of the Elevated was never theatrically released in the United States. In the 30 years since its completion it has been rarely screened, developing a cult amongst cinephiles and jazz- and graffiti-lovers. After two years of working to secure appropriate licenses for its soundtrack, APD’s Cinema Conservancy program will finally make this crucial cultural document and cinematic experience available to the public in 2014 with a theatrical run.

Filmmaker Manfred Kirchheimer (b. 1931) immigrated to New York with his family as a child, escaping Nazi Germany to settle in Washington Heights. After studying at Hans Richter’s Institute of Film Techniques at the City College of New York, he spent many years working in the film industry while self-financing his own independent films. A long-time professor at the School of Visual Arts, Kirchheimer has documented New York with an observant, sympathetic eye for decades, in films including We Were So Beloved (1986), Claw (1968), Short Circuit (1973), Bridge High (1975) and Colossus on the River (1963).

Now, 33 years after it’s initial release and coming back home, Stations of the Elevated’s new transfer can be seen with a fresh pair of eyes having its world premiere at BAMCinemaFest, Friday, June 27th at 8:00pm at the BAM Harvey Theater.

Details regarding the film’s theatrical re-release this fall will be announced in the coming months.

Cinema Conservancy is the releasing program of Artists Public Domain, a New York-based non-profit production and distribution company. Cinema Conservancy helps to ensure the legacy and public availability of crucial works of American Independent cinema. Previous Cinema Conservancy releases include Jamel Shabazz Street Photographer, the John Hubley Centennial, Nothing But a Man, Little Fugitive, Northern Lights and The Color Wheel. APD’s recent productions include Towheads, Another Earth, and The Forgiveness of Blood.