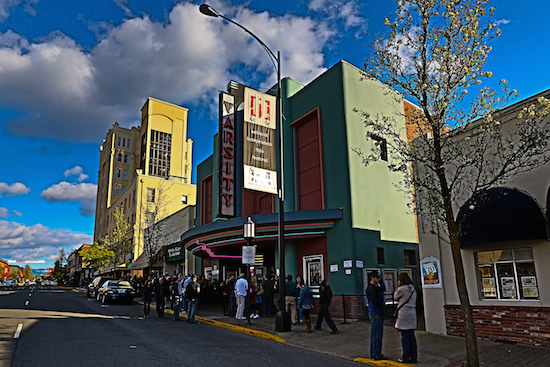 The Ashland Independent Film Festival has selected the CFO of High Sierra Music, Inc., Berkeley, CA to its top job. David Margulies of Ashland will succeed Anne Ashbey as the festival’s new executive director. Pam Notch, president of the AIFF board, described Margulies as “intelligent, dynamic and resourceful, with proven successes in his field. Dave brings over 19 years of festival experience to AIFF. During his professional tenure, Dave has developed deep relationships with key sponsors and partners, garnered numerous in-kind donations and demonstrated his acumen in fundraising.”

“I am deeply honored to have been selected for this position,” Margulies said. “I’m a huge fan of the festival. I have a passion for the arts and bringing transformation through the lens of human experience. I look forward to collaborating with AIFF’s incredible staff, board, volunteers and community supporters to build upon the festival’s success and ensure a brighter future for independent film in Southern Oregon.”

Margulies is well acquainted with AIFF, having served on the advisory board for two years from July 2012 to June 2014. “Dave’s incredible success in building and running a well-regarded music festival from the ground up has all the ingredients needed to not only strengthen AIFF but also take it to new levels,” Notch said. “Combine that with his existing experience and relationship with AIFF as an advisory council member, and he is a great fit for the film festival.”

Ashbey resigned recently after two years in the festival’s top position. She will continue to be a part of the organization as a member of AIFF’s Board of Directors. Margulies, 55, a New Jersey native, is the CFO, Co-Owner and Co-Producer of High Sierra Music, Inc of Berkeley, CA, managing over 100 staff and 500 volunteers and an event budget exceeding $1 million. He will continue to work with the 4-day annual festival.

Margulies has also worked for over five years at Sony Music Entertainment as their Regional Director of A & R, and as Managing Editor for College Media Journal of New York for seven years.

“AIFF offers an unsurpassed festival experience that has become a vital part of our community and cultural life,” says Margulies. “You can expect me to be looking for opportunities to expand the audience, garner more support and build the exposure.”

Margulies earned a degree in business management from Tulane University, New Orleans, LA. He moved to Ashland in 2005 with his family. “Coming from a business background, high on my list is to make the festival financially stronger,” he said. “We’re a non-profit arts organization, so we face the same financial challenges others do.”

AIFF is a widely recognized and highly regarded festival, screening 80-plus independently made documentaries, features and shorts at the Varsity Theatre, the historic Ashland Armory and the Ashland Street Cinema each year. Praised by filmgoers for the intimate access it affords to filmmakers, and by filmmakers for its warm and intelligent reception given to the filmmakers, the Ashland Independent Film Festival was named one of the “Top 25 Coolest Festivals in the World” by MovieMaker magazine, and holds the number two spot in the “Best Places to Live and Work as a Moviemaker in 2014, Top Towns.” The National Academy of Motion Picture Arts and Sciences and the National Endowment for the Arts have each twice awarded AIFF with rare festival support grants.