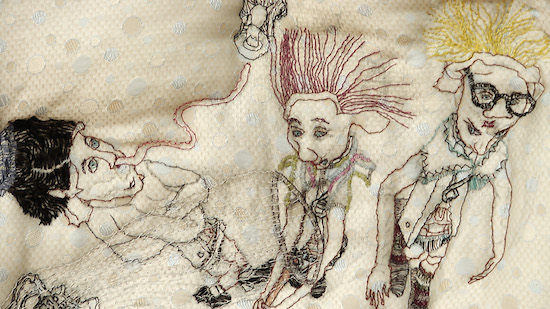 In 2003, Plate invented the Clothespin Freak characters, two-headed characters made of clear clothespins, sewn pieces and doll’s body parts, in a series of drawings as “a serio-comic response to our angst-ridden times.” In Plate’s paintings, sculptures, artist’s book and installations these Clothespin Freaks continued to evolve. In 2009, inspired by filmmakers like Jan Svankmajer and the Bolex Brothers, Plate pushed her characters even further and brought them to life through animation. Based on Plate’s “Clothespin Tarot” artist book from 2007, “The Reading” was born and in 2013, she produced “Hanging By A Thread”, the first short in an upcoming trilogy.

Plate’s mentor, Heather Dell, Art Historian and Director at Magnan Metz Gallery in New York says, “Catya Plate once again conveys her delicious and devilish vision with humor, wisdom, and a big helping of incredible technical and creative execution. “Hanging By a Thread” is an incredibly successful piece that proves Third Generation Feminist artists have as much to contribute to Contemporary Art as their predecessors. Plate’s unapologetic reclamation of once feminized materials in conjunction with state of the art technology secures her place in this new art historical and film making genre”.

Mark Bell, film critic and owner/publisher at Film Threat, says: ””Hanging By A Thread” is certainly a piece of art; a short film that welcomes interpretation and mental involvement and which explores the idea of creativity being the salvation of humanity with a nice assist by other elements of Nature.”

Film critic Paul Nadeau says: “Quite possibly the most imaginative and painstakingly created piece of animation I’ve ever seen”.

Brian Spath, Operations Supervisor at Oscar-qualifying St. Louis International Film Festival where “Hanging By A Thread screened in 2013, says: ““Hanging By A Thread” is the type of creative exhibition that makes you jealous of the creator’s talents!”

Born in Barcelona, Spain, and raised in Germany, Catya Plate attended the Werkkunstschule, Köln, before coming to New York on a Fulbright Scholarship for postgraduate studies at School of Visual Arts.