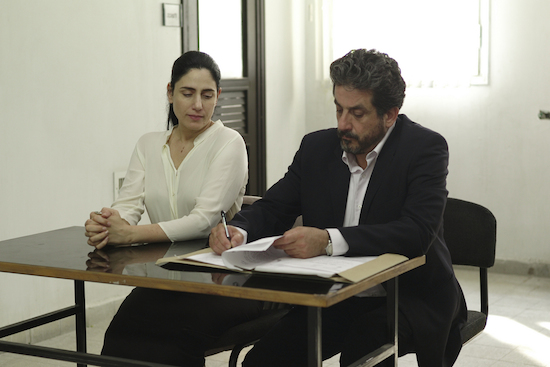 “A Conversation With…” Joel Schumacher will take place on Saturday, October 11th at 11:00am at Bay Street in Sag Harbor. Jess Cagle, Editorial Director of People and Entertainment Weekly, will lead the talk and will present Schumacher with the Golden Starfish Lifetime Achievement in Directing Award. Hilary Swank’s “A Conversation With…” will be held on Sunday, October 12th at 3pm at Bay Street. Along with this Master Class discussion moderated by Variety Executive Editor, Steven Gaydos, she will also be honored with Variety’s Creative Impact in Acting Award. Swank is attending on behalf of the Corcoran-sponsored Sunday Centerpiece film, THE HOMESMAN, which will mark its East Coast premiere at HIFF. 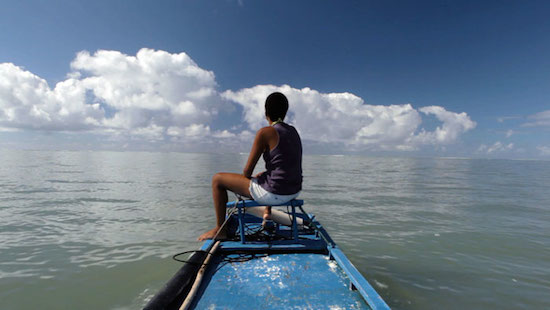 US Premiere
Director: Gabriel Mascaro
On a tiny coastal village in Brazil, Shirley and Jeison pass the time by working on a coconut plantation. On their spare time, he dives for seafood while she sunbathes and dreams of being a tattoo artist. Their restless but tranquil life is provoked as intense tropical storms approach, washing ashore a corpse. Drawing on his documentary roots, Gabriel Mascaro deliberately eschews a traditional narrative in favor of an atmospheric and lyrical approach. Weaving the textures of the landscape with superb, natural performances, Mascaro delicately reveals a thoughtful and, sometimes humorous, meditation on life and death.

BREATHE “Respire” (France)
US Premiere
Director: Melanie Laurent
Famed actress Melanie Laurent (INGLORIOUS BASTERDS, ENEMY) steps behind the camera for BREATHE, an assured and refined look at fragile adolescent friendships.  Entering the private world of Charlie and Sara, whose raw attraction quickly makes them inseparable, we see tenderness turn sour as Sarah shifts her attention to a young pilot, leaving Charlie heartbroken. Superbly acted by Josephine Japy (Charlie) and Lou De Laage (Sara), BREATHE is an honest look at young friendships, where passion can easily turn into obsession and the harsh reality of trying to find your voice means you may be left lost, wounded, and devastated.

THE DUKE OF BURGUNDY (United Kingdom) 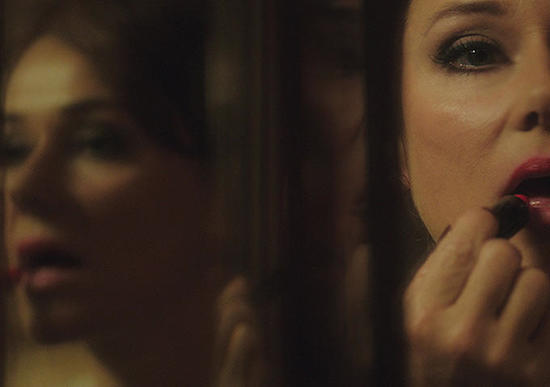 THE DUKE OF BURGUNDY

East Coast Premiere
Director: Peter Strickland
Similar to a larva transforming into a caterpillar only to cocoon and bloom into a butterfly, Peter Strickland’s THE DUKE OF BURGUNDY shifts and twists from a classic melodrama into a perverse and psychedelic sadomasochistic lesbian experience – all done with an artists eye for mood and detail. Both the gothic scenery and haunting score envelop the senses and manipulate the viewer into a feeling of frenzy. Elevated by powerful and sensual performances by the two leads, Strickland’s strange film achieves a unique beauty and profundity somewhere between David Lynch’s MULHOLLAND DR. and Luis Buñuel’s BELLE DE JOUR.

GETT: THE TRIAL OF VIVIANE AMSALEM “Gett” (Israel, France, Germany)
East Coast Premiere
Directors: Ronit Elkabetz, Shlomi Elkabetz
This final piece of the trilogy by Israeli siblings Ronit and Shlomi Elkabetz explores the unfolding of a marriage under the jurisdiction of a rabbinical court in which a Jewish marriage may only end if the husband presents a “gett,” a divorce document, to his wife. Calling attention to a male-dominant process that can take years, sometimes decades, and set entirely in the courtroom, this brilliantly written and acted film reveals the slow dissolution of a marriage between Vivane (Ronit Elkabetz) and Elisha (Simon Abkarian). Balancing the seriousness of what’s at stake with an often-humorous tone, GETT offers a deeply moving take on an otherwise painful process.

LITTLE ACCIDENTS (United States)
New York Premiere
Director: Sara Colangelo
A haunting portrait of the unintended consequence, LITTLE ACCIDENTS follows the wake of tragedy in small town America where a mining disaster leaves 10 dead and the delicate social fabric of a community in tatters. When the son of the chief executive goes missing, his wife; the lone survivor to the disaster, Amos; and Owen, a local boy left fatherless by the tragedy, become bound to one another by their shared grief and through a series of shocking revelations. A stunning work by first-time feature filmmaker, Sara Colangelo, it features a stellar cast, including Elizabeth Banks, Boyd Holbrook and Chloe Sevigny.

THE GREAT INVISIBLE (United States)
New York Premiere
Director: Margaret Brown
On April 20, 2010, the Deepwater Horizon oil rig exploded devastating communities throughout the Gulf Coast of the United States. Eleven lives were lost, the natural ecosystem was destroyed, and the pollution forced countless local businesses to shut down. Margaret Brown’s THE GREAT INVISIBLE, winner of the Grand Jury prize at SXSW, is a thought provoking and complex human drama that lifts the curtain on a corrupt and negligent industry driven by greed. With harrowing testimonies from survivors, families, local fisherman, an others perpetually effected by the disaster, Brown seeks to tell a sobering and layered account of a tragedy still unfolding. 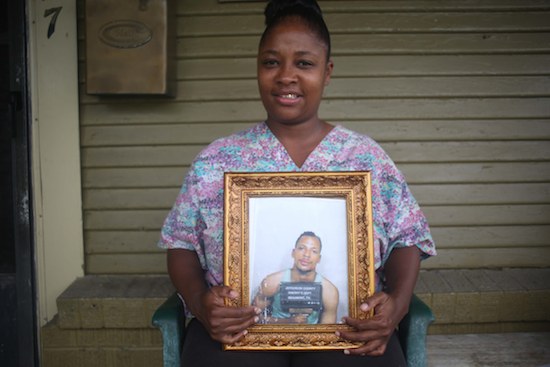 New York Premiere
Director: Jaap Van Hoewijk
On June 12, 2013 in Huntsville, Texas, preparations take place for the lethal injection of Elroy Chester, a man convicted of the rape of two teenage girls and the murder of their uncle. After 15 years on death row, Chester will be executed at precisely 6:00PM. While his family prepares to say goodbye, the victims and their family prepare for closure. KILLING TIME is the emotional follow up to the 1995 film, PROCEDURE 769, WITNESS TO THE EXECUTION, which examined those who came to Chester’s court sentences. Returning to Texas once more, director Jaap van Hoewijk turns his lens on the people most affected as they pass the final hours.

THIS IS MY LAND (France)
US Premiere
Director: Tamara Erde
“Education is the most powerful weapon which you can use to change the world,” said Nelson Mandela, and artist-filmmaker Tamara Erde’s first feature length film examines how the shared, complex and charged history of Israel and Palestine is taught to the next generation in this volatile region. Does it fuel conflict or encourage peace? How much freedom does the Ministry of Education give teachers? Through dialogues, debates, celebrations and field trips at six independent schools, this fascinating documentary observes how young minds are shaped by what is said and, just as importantly, by what is unspoken. 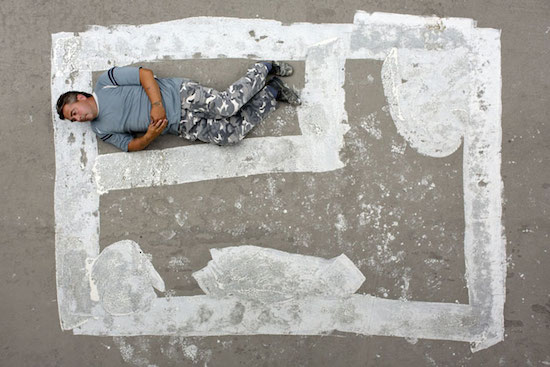 US Premiere
Director: Pavol Pekarčík, Ivan Ostrochovský, Peter Kerekes
Charged as terrorists, but now hailed as heroes three Czechoslovakian’s recount and reenact their odd and fascinating tales of armed resistance against the old communistic powers. Three portraits by three directors. A presidential assassination foiled through sheer laziness, a botched political tribune bombing due to alcoholism and a notorious bulletin board bomber who wanted nothing more than to blow up…you guessed it. Each story may be different, but the sentiment is the same: actions are what define you and even if you don’t hurt anyone or change anything, they still may be recognized for better or for worse.

THE BABY “LA BAMBINA (BACHE)” (Italy, Iran)
North American Premiere
Director: Ali Asgari
Narges and her friend are calling everyone they can think of with an unusual request.  They urgently need someone to look after her baby for a night or two…

ALL WE SHARE “ALLT VI DELAR” (Sweden)
North American Premiere
Director: Jerry Carlsson
Two arborists, Samir and Sara, are hired to cut down a perfectly healthy tree. This, and the urgency with which it needs to be done, surprises them but they agree and as they work, comprehension dawns.

TZNIUT (USA)
East Coast Premiere
Director: David Formentin
A Hasidic woman in Brooklyn discovers she has an STD. Although limited by her social standing in a deeply Orthodox community, she seeks the origin of her illness.

THE QUEEN “LA REINA” (Argentina)
East Coast Premiere
Director: Manuel Abramovich
Memi is 11 years old, and she is going to be Queen of the Carnival. It’s a dazzling honor, but you have to suffer to be beautiful.

ONCE UPON A TREE “HET MEISJE EN DE BOOM” (The Netherlands)
North American Premiere
Director: Marleen van der Werf
Sitting in her favorite oak tree, 11-year-old Filine encounters little wonders in the natural world around her. Filine doesn’t like changes that much. She sometimes wishes she could be a tree and everything would stay the same.

JUTRA (Canada)
US Premiere
Director: Marie-Josée Saint-Pierre
Through the ingenious repurposing and animation of archival footage, a remarkable and revealing documentary homage to filmmaker Claude Jutra pulls us deep inside the life, times and imagination of the artist.

ABANDONED GOODS (United Kingdom)
North American Premiere
Directors: Pia Borg, Edward Lawrenson
From 1946 to 1981 a psychiatric hospital in the UK allowed its patients to create art. After the dissolution of the asylum only around 5,500 pieces survived. This is their story.

AN IMMORTAL MAN (USA)
US Premiere
Directors: Josh Koury, Myles Kane
Baseball legend Ted Williams lived his life in the public eye and his death, like his life, will be forever frozen in time – however this time (contrary to the instructions in his will) via cryostasis.