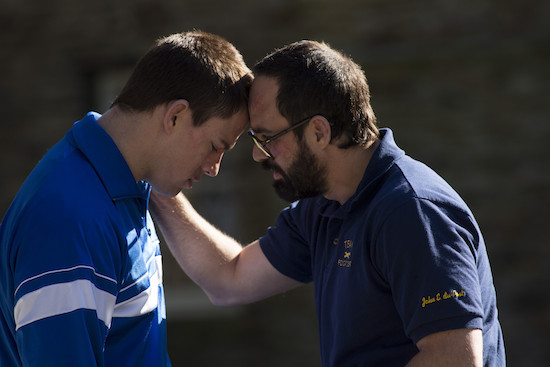 Bennett Miller’s FOXCATCHER is Saturday’s Centerpiece Film, playing at Guild Hall in East Hampton on Saturday, October 11th. The film’s star Mark Ruffalo will attend the festival premiere along with taking part in “A Conversation With…” on Sunday, October 12th at 2pm at Bay Street, which will be sponsored by NYU Langone Medical Center. Based on true events, the film follows Olympic Gold Medal-winning wrestler Mark Schultz (Channing Tatum) and his revered brother Dave (Mark Ruffalo) as they fall into the orbit of an eccentric multi-millionaire, John du Pont (Steve Carell), with the ambiguous goal of pushing Mark to fame and glory. Nothing quite prepares you for FOXCATCHER, as this riveting stranger-than-fiction tale turns dark and tragic. Sony Pictures Classics will release the film on November 14, 2014.

Now entering its 15th year at HIFF, this year’s Films of Conflict & Resolution (C&R) program consists of a fantastic lineup of four documentaries and a narrative film. The C&R program recognizes and celebrates films that, in creative and enlightening ways, deal with the complex issues and the human dramas associated with war and violence. It also recognizes one of the films in the series with a cash prize of $5,000 and a panel discussion after its screening, encouraging dialogue about the topic and providing a platform to learn, react and engage in worthy causes and issues.

The 22nd Annual Hamptons International Film Festival, which will be held over Columbus Day Weekend, October 9-13, 2014.

VIRUNGA
Director: Orlando Von Einsiedel
The breathtaking Virunga National Park, a UNESCO world heritage site in eastern Congo, is under attack from many sides. With its rich bio-diversity, Virunga is home to the last mountain gorillas and holds a wealth of natural resources. From sweeping vistas to pixelated images of secret meetings, Orlando von Einsiedel fashions together a thrilling first feature documentary, introducing us to the brave people protecting the park: a Belgian conservationist leading the army of park rangers; an ex-child soldier and a young French journalist who covertly film local politicians and international businessmen; and a ranger who has become a surrogate parent to orphaned gorillas. The film is also the winner of the Zelda Penzel Giving Voice to the Voiceless Award, recognizing a film in the Festival that brings attention to the suffering of animals.

E-TEAM
Director: Ross Kauffman and Katy Chevigny
Anna, Ole, Fred and Peter, members of the Emergency Team (E-Team) for a respected international human rights organization, are the first people on the scene when there is suspicion of human rights abuses. Entering areas of conflict like Syria or post-Qaddafi Libya, they gather evidence to determine if further investigation is warranted, and often what they find challenges decision makers, holding them accountable. Award-winning filmmakers Ross Kauffman and Katy Chevigny take us behind the scenes and on the ground with these very different, yet fearlessly committed individuals as they balance their personal and family life with their intense work life in the field.

CHARLIE’S COUNTRY
East Coast Premiere
Director: Rolf de Heer
Tired of the constant policing, Charlie – portrayed by the regally gray-maned David Gulpilil – stubbornly copes with the encroaching “white man’s laws” into his remote Aboriginal community in Australia’s Northern Territory. He goes back to his roots to live the “old way,” only to set off a chain of events he didn’t see coming. Director Rolf de Heer crafts a subtle portrait of a man caught between two cultures and creates an exquisite showcase for his co-writer, veteran actor Gulpilil (WALKABOUT, RABBIT PROOF FENCE), winner of the Un Certain Regard Best Actor Prize at the 2014 Cannes Film Festival.

THE LOOK OF SILENCE
Director: Joshua Oppenheimer
While Joshua Oppenheimer’s groundbreaking documentary, THE ACT OF KILLING, cast a light on the victors of the mid-1960s Indonesian genocide, his equally devastating follow-up, THE LOOK OF SILENCE, focuses on one family’s struggle to understand the horrific murder of their loved one. Adi, a humble optometrist in a rural village, stoically stares at clips from the first film before deciding to confront his brother’s executioners, many of whom are still in power. Opening old wounds, asking the hard questions, and receiving veiled threats, he attempts to start a dialogue between victims and killers who for generations have lived side-by-side in silence.

THIS IS MY LAND
US Premiere
Director: Tamara Erde
“Education is the most powerful weapon which you can use to change the world,” said Nelson Mandela, and artist-filmmaker Tamara Erde’s first feature length film examines how the shared, complex and charged history of Israel and Palestine is taught to the next generation in this volatile region. Does it fuel conflict or encourage peace? How much freedom does the Ministry of Education give teachers? Through dialogues, debates, celebrations and field trips at six independent schools, this fascinating documentary observes how young minds are shaped by what is said and, just as importantly, by what is unspoken.