The Little Tin Man is a “Warmhearted Film” 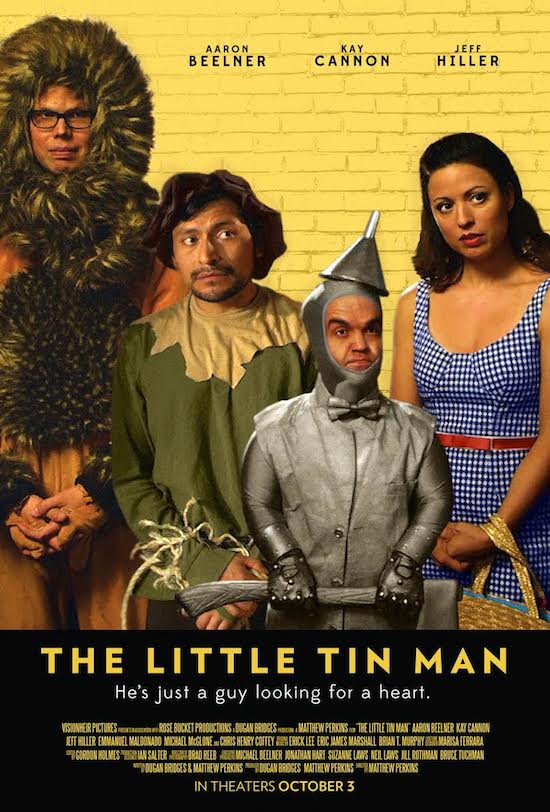 Herman (Aaron Beelner) is a dwarf actor who only gets gigs playing elves in Christmas commercials. In his day job, Herman works alongside his brother Gregg (Jeff Hiller) at an upscale New York City restaurant owned by their mother. However, when their mother dies she leaves the restaurant to Gregg – the only thing she gives to Herman is a directive that he must start taking his acting career more seriously. Frustrated by being cut out of his mother’s will and tired of playing roles that are solely defined by his stature, Herman is less than enthused when his agent calls him with news that has gotten Herman an audition for the role of the Mayor of Munchkinville in Martin Scorsese’s remake of the Wizard of Oz. Herman is convinced by his friend Miller (Kay Cannon), who is also a struggling actor and a waitress at the restaurant, to go on the audition but ask to read for the Tin Man instead. Because Herman wants to transcend stereotypes – and because he harbors an unrequited crush on Miller – Herman decides to go for it. What follows is Herman’s journey towards gaining respect as an actor for his talent rather than his size.

The film itself seems to be against Herman, as evidenced by its calliope-heavy soundtrack that recalls circus music and an opening song that makes every “bigger man” and “little person” pun you can think of. Naturally, there are plenty of characters who are disrespectful and condescending toward Herman, so it isn’t a surprise when Herman becomes irritable with others, which Beelner plays off very well. Director Matthew Perkins effectively establishes how tough it can be to live at Herman’s size, demonstrating his real-life issues like trying to reach things on high supermarket shelves, and, from a more emotional standpoint, finding love.

As interested as I was in Herman’s struggle, I was pulled out of the film a bit by some of the over-the-top supporting characters. Some of these smaller roles are played by actors who are really hamming it up (Eddie Dunn, who plays Herman’s agent Tyrone Valentine, really lays it on thick). The one exception is seeing Ed Burns favorite Michael McGlone show up in a small role as a lawyer, essentially reprising his slick character from the GEICO commercials he stars in, which was hilarious. It’s almost as if Perkins and co-writer Dugan Bridges weren’t confident with the material and thought the zaniness needed to be amped up. But instead of creating supporting characters, they’ve created supporting caricatures — but the story of The Little Tin Man is interesting enough so the film really doesn’t need these caricatures.

I was waiting for a scene that really proved that Herman (the character, not actor Aaron Beelner) is a great actor, but it never really comes. It would’ve been an excellent addition to let audiences know what we’re missing out on when talented actors are denied roles based on the way they look. It’s particularly interesting to view The Little Tin Man in light of the recent career accomplishments of Emmy and Golden Globe award-winner Peter Dinklage (he’d be at home in just about any role in any Scorsese movie). I’m not sure if that informed the film in any way, but the real-life circumstances relate to the narrative.

The Little Tin Man is a warmhearted film about an actor who tries his hardest to improve his place in the world despite his physical limitations. Even if some of the sillier supporting characters distract from that, it still fits the definition of an inspiring, character-driven comedy gem. If there’s hope for Herman, there’s hope for all of us.