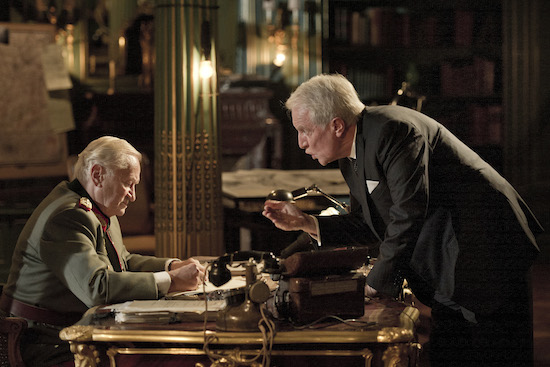 Swedish diplomat Raoul Nordling (André Dussollier) – who was born and raised in Paris – sneaks into Cholititz’s headquarters and tries to persuade him from destroying the city. Though Choltitz at first dismisses Nordling’s efforts as futile, by appealing to Choltitz’s better nature and his deep-seeded doubts that Germany can win Nordling begins to get through to Coltitz. However, Nordling soon learns that Coltitz fears for something greater than his own life if he does not fulfill the Fuhrer’s orders to destroy Paris are not fulfilled.

Diplomacy is adapted for the screen from the play by Cyril Gely and the film’s director, Volker Schlöndorff. The stage origins of Diplomacy are obvious – most of the narrative is a two-man show between Choltitz and Nordling, and both actors convey the intense emotion of the weight of history as the debate over the city’s future lies in the balance. Naturally, viewers know that Paris and its monuments remain until this day, but Schlöndorff (who has been directing films for more than half a century) focuses on the dramatic proceedings that led Paris to safety. Like most great play adaptations, the power of the film is in its dialogue. What the film adds that the play would lack on stage is the beautiful shots of Paris’ monuments and the evocative score composed by Jörg Lemberg.

What Diplomacy primarily offers is two great European actors (both Arestrup and Dussollier are three-time César Award winners) sparing in one of the most monumental decisions in modern European history. Anyone who has an appreciation for history or for effective dramatic  acting will be enthralled by the performances by both men. Of course, if an 84 minute play adaptation based on historical events in German isn’t your thing, you might want to overlook Diplomacy. Despite its wartime setting there are no battles depicted – or any action, for that matter – nor any semblance of romance except for Nordling’s love for Paris. Yet all the ingredients for compelling drama are here – making Diplomacy an excellent film for both history and theater buffs.