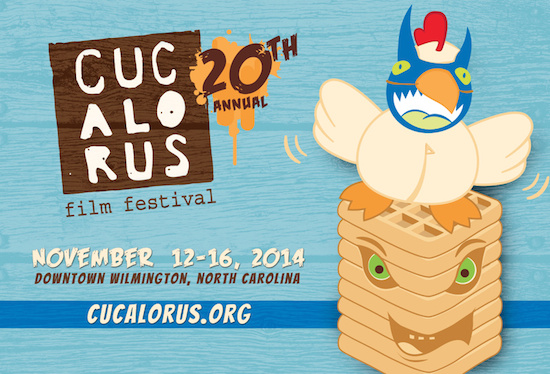 The Cucalorus Film Festival announced the final film and event line-up for its 20th annual showcase, scheduled for November 12-16, 2014 in downtown Wilmington, North Carolina. The five-day event will include 43 narrative features, 21 documentary features, 145 shorts, 34 music videos and 7 works-in-progress along with a deep schedule of multi-disciplinary performances ranging from dance to spoken word and beyond. Among the 241 films being shown at Cucalorus, some notable selections include:

Uncensored – a documentary by DC-based director Stephanie Martinez featuring three Colombian journalists recounting the terrifying reality of living through the Escobar cartel and the ongoing struggle to maintain freedom of the press.

A Better You – From one of the founders of The Upright Citizens Brigade (Matt Walsh from HBO’s “Veep”) comes the story of Dr. Ron (Brian Huskey), a revolutionary Los Angeles hypnotherapist, who could solve everyone’s problems but his own.

Times Like Dying – a thrilling Western set in the Post-Civil War South involving four brothers facing the loss of their family farm; features actorBill Cody. Shot and produced in Wilmington.

Labyrinthus – an edge of your seat thriller about a 14-year-old boy who must complete a sinister computer game that uses real children from his neighborhood as players; part of the newly launched Kids-a-lorus program and recently premiered at the Toronto International Film Festival 2014.

Hide and Seek – director Joanna Coates’ provocative drama about a group of young, unmoored adults who retreat to the countryside to test intimate boundaries; winner of the Michael Powell award at EdinburghFilm Festival 2014.

Felix and Meira – a young married woman from Montreal’s Orthodox Jewish community escapes the bonds of her faith when she meets an artist in her neighborhood who is mourning the loss of his father; won best Canadian feature at Toronto International Film Festival 2014.

Spring – Justin Benson and Aaron Moorhead’s intriguing indie drama blends romance and horror together in this ultimately uplifting film about a young man who flees California to find himself working on a farm in Italy and falling in love with a woman who carries a dark secret.

The Tribe – a smashing hit at this year’s Cannes film festival, this outstanding Ukranian feature follows a gang of deaf-mute students who spend their nights running a prostitution ring at the local truck stop.

The Age of Love – a charming documentary that follows the humorous adventures of thirty seniors in Rochester, NY who sign up for a Speed Dating event exclusively for 70- to 90-year-olds.

Force Majeure – directed by Ruben Ostlund, this award-winning, brilliantly funny psychodrama tells the story of a model Swedish family on a skiing holiday in the French Alps when an avalanche strikes;Sweden’s submission for Best Foreign Language Film for Oscars 2014; winner of Jury Prize in Un Certain Regard at Cannes 2014.

Wildlike – an unsettling drama about a young girl who tries to make her way back to Seattle after fleeing her uncle’s home in Alaska; recently premiered at the Hamptons International Film Festival.

The Hip-Hop Fellow – a documentary following Grammy award winning producer 9th Wonder’s tenure at Harvard University where he explores 40 years of hip-hop history and lays out the case for hip-hop as part of the larger evolution of the universal language of music.