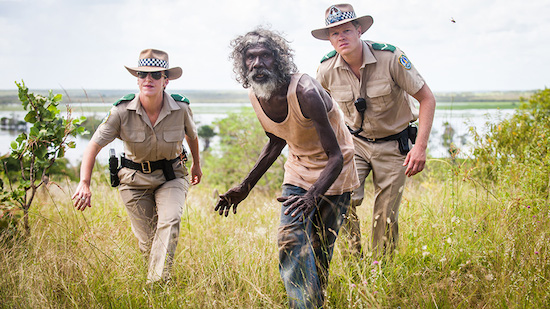 The 36th Cairo International Film Festival taking place November 9 -18, 2014, will feature 6 international films, submitted for the Best Foreign Language Film award at the 2015 Oscars, organized by the Academy of Motion Picture Arts and Sciences. The films include Charlie’s Country (Australia), Eyes of a Thief (Palestine), The Light that Shines Only There (Japan), Rocks in My Pocket (Latvia), Timbuktu (Mauritania) and Little England (Greece).

Charlie’s Country (Australia – 2013) International Competition: Directed by Rold de Heer, the film tells the story of a warrior named Charlie, who lives in a remote indigenous community within the northern region of Australia. As the government increases its stranglehold over the community’s traditional way of life, Charlie becomes lost between two cultures. The film’s leading star, David Gulpilil, earned the Best Actor Award at Un Certain Regard within Cannes Film Festival in 2014.

Eyes of a Thief (Palestine, 2014)| International Competition: Directed by Najwa Najjar, the film stars Khaled Abol Naga and Souad Massi. Filmed in the heart of the occupied territories of Palestine over the course of 25 days, Eyes of a Thief is based on a true story during the upheavals of the Palestinian Uprising in 2002, offering a glimpse into the Palestinian society and their options of survival and resistance.

The Light that Shines Only There (Japan, 2014)| Festival of Festivals: Directed by Mipo Oh, the film follows a young man called Tatsuo, who becomes head over heels with his friend’s sister, who is clearly older than him and strives to make a living to save her poor family.  The film was showcased at the closing of Osaka Asian Film Festival and received the Grand Prix at the Montreal World Film Festival.

Rocks in My Pocket (USA – Latvia, 2014) | Festival of Festivals: Written, produced and directed by Signe Baumane, the animated picture is set in  the late 1920s Latvia, where a pretty young lady, Anna, falls in love with an adventurous entrepreneur. Following their marriage, the husband’s jealousy drives him to hide Anna away in the forest far from other men, where she bears 8 children. The film earned the FIPRESCI award and a Special Jury Mention from Karlovy Vary International Film Festival.

Timbuktu (Mauritania, 2014)|Prospects of Arab Cinema: Directed by Abderrahmane Sissako, the film traces the vivid transformation of the city of Timbuktu, which lies on the Mauritanian borders with Mali. A popular city recognized for its illustrious culture and openness to the world; it’s even said to be the place where African and Arab heritage and civilization were born. Timbuktu has turned into a bloodbath by extremist groups, which banned everything – starting from music to football and cigarettes. Sissako garnered two awards from Cannes Film Festival namely; the Francois Chalais Prize and the Prize of the Ecumenical Jury. He also won the Best Feature Film Award at Jerusalem Film Festival.

Little England (Greece)|Festival Closer: Directed by Pantelis Voulgaris, the film is set during the interwar period in the Greek island of Andros, where two sisters living in the same house fall in love with the same man. The film has also earned the Golden Goblet Award for Best Feature Film at the 17th Shanghai International Film Festival in June, 2014, in addition to Best Actress and Best Director awards.

Documentary 'THE LAST PATROL' to Debut on HBO November 10