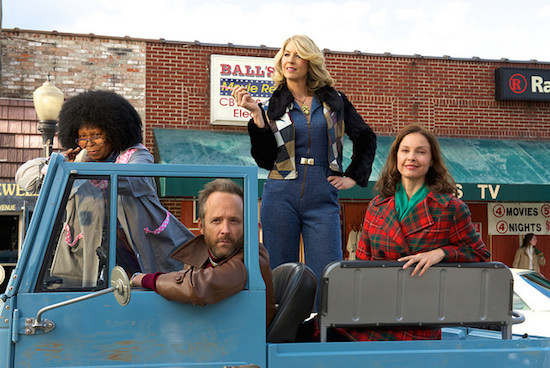 The 2014 Virginia Film Festival lineup will return to Charlottesville from November 6-9, and officially kick off with the World Premiere of Big Stone Gap, filmed on location in Big Stone Gap, Virginia, and based on the popular series of books by noted author and Big Stone Gap native Adriana Trigiani. The film stars Ashley Judd as the small town’s self-appointed middle-age spinster who keeps countless secrets before discovering one of her own that will change her life forever. 5 to 7, the tale of a “cinq-a-sept” romance, and love’s power to conquer even the most insurmountable of obstacles, has been selected as the Centerpiece Film, and for the closing film, the festival will celebrate the 25th Anniversary of Dead Poets Society.

University of Virginia grad Katie Couric returns to her alma mater to present and discuss “Fed Up” the powerful documentary on America’s runaway childhood obesity epidemic. Couric narrates the film, which she co-executive produced with Laurie David (An Inconvenient Truth). Fed Up features interviews with food and nutrition experts and heartbreaking first-person interviews with children on its way to taking on the powerful “Big Sugar” lobby and questioning many of the basic “truths” we have been told about food and nutrition for the past 30 years.

Buzzard – Director Joel Potrykus will present his dark comedy about a horror metal slacker who flees a dead end temp job to hide out in a friend’s basement, armed with a pile of pilfered bogus checks and a nasty temper.

Dumb and Dumber To – Jeff Daniels and Jim Carrey are back…and dumber than ever…in this sequel that picks up twenty years from the time we first met their dimwitted duo, and the boys are on a quest to find their long lost children in hopes of finding a kidney.

Fishing Without Nets – This affecting film from director Cutter Hodierne won Best Director honors at Sundance this year and tells the story of a young Somali pirate from the perspective of the pirates themselves.

Foxcatcher – This powerful psychological drama tells the true story of John duPont, chillingly played by Steve Carell, a deeply troubled man who lures Olympic hopeful wrestler Dave Schultz (Channing Tatum) to live and train with him. It was a move that would have tragic repercussions.

Hellion – Breaking Bad star Aaron Paul stars in this disturbing, powerful and authentic story about a fractured family’s response to a 13-year-old boy’s spiraling out of control. The film, directed by Kat Candler, was one of the most talked-about films at Sundance this year.

The Imitation Game – Benedict Cumberbatch is earning significant Oscar talk as mathematician Alan Turing whose status as a war hero, earned by leading a team that cracked the German Enigma Code and shortened World War II, is destroyed by revelations about his personal lifestyle and the unenlightened reactions of his countrymen.

Low Down –Directed by Jeff Preiss, the film looks at the life of celebrated jazz pianist Joe Albany through the eyes of his young daughter Amy Jo Albany, who wrote the memoir recounting his battle with a drug addiction in the 1970’s and 80’s on which the film is based.

Mommy – Canadian director Xavier Dolan’s emotionally-charged story of a widowed single mom trying to manage her explosive 15-year-old ADHD son and a neighbor whose unexpected support adds an unexpected sense of stability, and ultimately, hope, to their lives. The film shared the 2014 Jury Prize at Cannes with Jean-Luc Godard’s Goodbye to Language, which will also be featured at the VFF this year.

Mr. Turner – Filmmaker Mike Leigh turns his unblinking and improvisational focus to the last 25 years of eccentric British painter J.M.W. Turner, whose complicated life and relationships make him at once loved and reviled by the art world, the public, and royalty.

Shaft – Part of a larger tribute to the famed photographer and film director Gordon Parks, this special screening of the film that introduced true cool to the 70’s will be followed by a discussion with its star, Richard Roundtree.

Wild – Reese Witherspoon is earning significant Oscar® buzz for her performance as author Cheryl Strayed, who sets out on a grueling thousand-plus-mile hike along the Pacific Trail in an attempt to heal herself from the loss of her mother, a divorce, and years of self-destructive behavior.

Alive Inside – This stirring film follows social worker Dan Cohen, founder of the nonprofit organization Music & Memory, as he fights against a broken healthcare system to demonstrate music’s ability to combat memory loss and restore a deep sense of self to those suffering from it.

All Fall Down – Filmmaker Emily Topper looks back at her family’s complex reaction to her grandfather’s violent murder in Baltimore in 1972 in a first-person, close-to-the-bone treatment of the incident and its racially-charged aftermath. The film will be presented by its executive producer, VFF Advisory Board Member Ron Yerxa.

Gray Matters – Marco Orsini’s captivating documentary presents the story of Eileen Gray, the 20th century artist whose vision, imagination, and sensibility changed the way we live with furniture and within houses.

The Hip Hop Fellow – This film follows the Grammy Award winning producer 9thWonder’s tenure at Harvard University as he teaches ‘The Standards of Hip Hop’ course, conducts research for his thesis, and explores hip-hop’s history, culture and role in academia.

How I Got Over – Filmmaker Nicole Boxer’s moving film follows 15 formerly homeless and/or incarcerated women as they craft an original play, based on their harrowing life stories, to be performed one-night only at The Kennedy Center.

Out in the Night – Blair Dorosh-Walther tells the story of four young African-American lesbians in New York City fight back when they are sexually threatened by a man on the street, then are tried and convicted in the courts and the media as a ‘Gang of Killer Lesbians.’

This Time Next Year – Director Jeff Reichert (who screened his documentary Remote Area Medical at the Festival in 2013), returns with co-director Farihah Zaman to present this moving look at the devastation Hurricane Sandy brought to Long Beach Island, New Jersey.

A Winding Stream – This music-filled documentary traces the influential musical and personal arc of the legendary Carter family from, their early days in Southwestern Virginia to their famed intersection with Johnny Cash and their efforts to add to their musical legacy today.

Big Moccasin – Directed by Virginia native Andrew Moynehan and Chelsea Moynehan, the film explores the meaning of life in the mountains, from the varied perspectives of the individual characters to the universal, unified knowledge and love for the mountain way of life.

Big Significant Things – Director Bryan Reisberg’s road trip movie earned raves at SXSW, and focuses on what happens when a man lies to his girlfriend in order to take a southern road trip that culminates right here in the Commonwealth.

From Grain to Growler – A documentary focusing on the explosion of the craft beer culture in Virginia.

Goodish – Filmmaker Amanda Patterson’s story of a couple who take their previously platonic relationship physical only to face up to an interrogation by prying friends that makes them wonder if their friendship will ever be the same.

Wish You Well – Bestselling author David Baldacci will present and discuss this adaptation of his 1940’s coming of age story about a young girl who moves with her brother from New York to a Virginia farm following a family tragedy and discovers truths about her family and herself in the process.

Las Maestras de la Republica (Spain) – Director Pilar Pérez Solano’s acclaimed documentary celebrates a group of women in Spain who bravely fought to bring down the walls between male and female students, only to have their efforts destroyed by the Civil War that started in 1936.

A Girl Walks Home Alone at Night (Iran) – In the Iranian ghost-town Bad City, a place that reeks of death and loneliness, the townspeople are unaware they are being stalked by a lonesome vampire.

Babadook (Australia) – This gripping modern suspense thriller tells of a single mother, plagued by the violent death of her husband, who battles with her son’s night time fear of a shadowy monster. But soon, she discovers a sinister presence is lurking in the house.

Futuro Beach (Brazil/Germany) – Short after facing the failure of an attempt to rescue a drowning man, Donato meets Konrad, friend of the victim. Motivated by the circumstances, Donato decides to begin a new life in Berlin, but pieces of his past are coming after him.

Girlhood (France) – A complex look at the America’s justice system, the film follows two female inmates – victims of horrific violence and tragedy who are serving time in a Maryland juvenile detention center.

Level Five (France) – From filmmaker Chris Marker, whose Le Joli Mai was a favorite of last year’s VFF, comes Level Five, comes this story of a video game designer and his work on a WW II themed project. The film was first released in 1997, and is just now available for the first time in the United States.

Run Boy Run (Germany/Poland) – The film tells the true story of 9-year-old Jurek, who escapes from the Warsaw ghetto in 1942 and learns to survive in the nearby woods until the end of the war.

What We Do in the Shadows (New Zealand) – This dark comedy follows the lives of three roommates just trying to deal with typical life challenges – like being immortal vampires with an insatiable thirst for human blood. The film featuresFlight of the Conchords star Jemaine Clement.