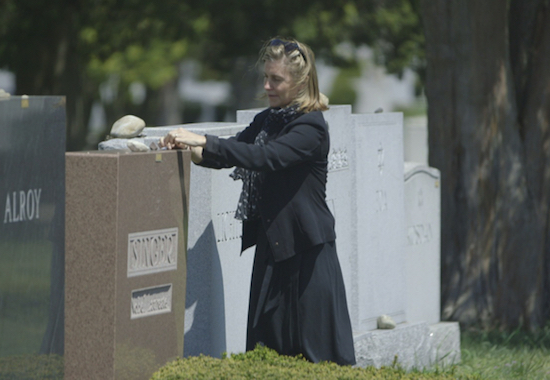 The Muses of Isaac Bashevis Singer

The 24th annual New York Jewish Film Festival scheduled to be held at the Film Society’s Walter Reade Theater and Elinor Bunin Munroe Film Center, from January 14 to 29, 2015 will screen 47 features and shorts from 11 countries.  The festival opens on Wednesday, January 14 with the U.S. premiere of Asaf Galay and Shaul Betser’s The Muses of Isaac Bashevis Singer. The Nobel Prize-winning author Isaac Bashevis Singer was a charming enchanter both on the page and in his romantic life. This surprising and unflinching documentary explores, through poignant interviews and exclusive archival footage, the unknown history of one of his most vital sources of creative inspiration: his translators. Dozens of women throughout Singer’s life worked with him to open the doors to his singular Yiddish prose for the rest of the world to enjoy, and his relationships with many of them blurred the lines between the professional and the intimate.

Closing Night on January 29 will feature the U.S. premiere of Maxime Giroux’s Felix and Meira. In the Mile End neighborhood of Montréal, hipsters and Hasidim coexist amicably but independently. When Meira, an Orthodox Jewish wife and mother with an undercurrent of rebelliousness, meets Felix, a middle-aged atheist adrift without family ties, a slow-blooming affair takes shape that will present Meira with a difficult fork in the road.

Three films in the festival touch on Israel, past and present.  Israel’s 2014 Foreign Language Oscar submission and a New York City premiere, Gett: The Trial of Viviane Amsalem is adapted from a true story of an Orthodox woman who has spent five years in a legal stalemate fighting for a divorce that, according to religious law, requires her husband’s consent. Ronit Elkabetz (who co-directed with her brother Shlomi Elkabetz) delivers an unforgettable performance in the lead role. The Zionist Idea, receiving its world premiere, is a feature-length exploration of one of the most influential, controversial, and urgently relevant political ideologies of the modern era.  Directed by Joseph Dorman (Sholem Aleichem: Laughing in the Darkness) and Oren Rudavsky (A Life Apart: Hasidism in America), the film examines the meaning, history and future of Zionism at this crucial time. A panel discussion will take place in conjunction with the film on January 25. Roberta Grossman’s Above and Beyond, produced by Nancy Spielberg, presents the story of a group of Jewish American fighter pilots who returned to the battlefield during the 1948 Israeli War of Independence. This documentary combines interviews with stunning footage taken from their planes.

Five films focus on various aspects of the Holocaust and its repercussions. Let’s Go!, directed by Michael Verhoeven (The Nasty Girl) and a U.S. premiere, artfully presents a biting commentary on post-World War II German society in an adaptation of Laura Waco’s autobiographical novel. Overcome with grief at her father’s funeral in 1968, Laura looks back with fresh eyes at her parents’ decision to settle in Germany after surviving the Holocaust. In Forbidden Films, receiving its New York premiere, Felix Moeller brings viewers into a vaulted, explosive-resistant compound where 40 incendiary Nazi propaganda films are kept, banned from public viewing; and interviews renowned film historians and filmmakers who debate the importance of these “Nazi movies of the poison cabinet” asking: Are they worth keeping? Do we need to show them? How do we approach this dark legacy? Acclaimed director Amos Gitai’s Tsili, receiving its U.S. premiere, adapts Aharon Appelfeld’s novel about a young Jewish woman hiding in the forests south of Czernowicz, her world and family having been ripped away, and her subsequent wandering and search for meaning following the war. Dieter Reifarth’s The Tugendhat House, also a U.S. premiere, examines the history of one of Ludwig Mies van der Rohe’s earliest prototypes of modernist architecture in Europe. Built for a Jewish family by the name of Tugendhat in 1930, it was abandoned during the Nazi occupation, only to resurface in the ensuing decades as a therapy center, a ballet school, and a school for children with scoliosis. In Natan, investigative documentarians David Cairns and Paul Duane reveal the forgotten life of Bernard Natan, a Romanian Jew who fought for France in World War I and became the head of the innovative and influential Pathé studios, only to die forgotten during the Holocaust and almost erased from the history of French film.

Three films examine Jews and the world of entertainment. The Outrageous Sophie Tucker, directed by William Gazecki and receiving its New York premiere, looks at the life of the so-called “Queen of Vaudeville,” theater, radio, and television icon Sophie Tucker. Born in Russia into a poor Jewish family in 1887, her campaign to capture Hollywood’s heart is a marvelous rags-to-riches story. In How to Break Into Yiddish Vaudeville, a world premiere short, animator Jack Feldstein uses his trademark style of “neonizing” (manipulating video into a kaleidoscopic color palette that resembles classic American neon signs) to whimsically document the cutthroat world of New York City burlesque theater. Hilla Medalia’s The Go-Go Boys: The Inside Story of Cannon Films, a New York premiere, revisits the lives and careers of Israeli cousins Menachem Golan and Yoram Globus, who took over the failing Cannon Films studio and forged a new business model by producing films with shlocky scripts, ranging from action thrillers like Death Wish II to musicals such as Breakin’, and even collaborations with auteur filmmakers like Andrei Konchalovsky and Jean-Luc Godard. The film features interviews with Chuck Norris, Jean-Claude Van Damme, and other B-movie talent, as well as Golan and Globus. The festival will present a Saturday midnight screening of Breakin’ on January 17.

The festival also includes three features receiving New York premieres. In Yossi Aviram’s The Dune, a 65-year-old Parisian police officer, weary of his long career, meets a mysterious and spiritually motivated younger man, triggering a bizarre sequence of events that shapes both of their futures. The cast includes noted French actor Mathieu Amalric (The Grand Budapest Hotel). In Susan Korda’s slice-of-life drama Salomea’s Nose, the title character remembers the day her beloved brothers disfigured her and themselves for life with one clumsy act. At just under 23 minutes, the film, featuring Barbara Sukowa (Hannah Arendt) as the voice of Salomea, offers a delightfully ambiguous thesis about fate and family dynamics. In Hugo Gelin’s Like Brothers, a successful entrepreneur in his forties, a cynical screenwriter in his thirties, and a young man on the cusp of adulthood are brought together by the untimely death of the woman they all love. Reeling with grief after her funeral, they embark on a spontaneous trip together to a summer cabin in Corsica—a trip she originally planned for all of them—which becomes a journey of both tribute and discovery.

Two additional features will be screened. Director Daniel Burman’s wistful comedy The Mystery of Happiness is part buddy movie, part detective story, and part romance. Life-long business partners Santiago and Eugenio understand each other without words, care for each other, and need each other. When Eugenio vanishes without a clue, Santiago and Eugenio’s wife Laura join forces to solve the mystery of his disappearance.  Alexey Fedorchenko’s colorful Angels of Revolution, receiving its U.S. premiere, tells the story of five cosmopolitan artists, led by a famed Communist revolutionary, searching for answers during a clash of cultures now known as the Great Samoyedic War in 1930s Siberia.

Three documentaries round out the main slate. Guy Natanel and Annie Sulzberger’s The King of Nerac, receiving its world premiere, is a thoughtful portrait of David Breuer Weil, a modern day Gauguin who gave up a career as one of the world’s leading art dealers to embark on a life of creativity and contemplation as an artist known for his vast, apocalyptic canvases and his colossal, dynamic sculptures that dominate public spaces around the world from London to Jerusalem. Yossi Aviram’s documentary The Polgar Variant (U.S. premiere) follows the travels of the Polgár sisters, groomed by their father Lázló to become chess champions. From their childhood in 1970s Communist Budapest to today, the family’s tale continues to make shock waves in the press.  Erik Greenberg Anjou’s Deli Man, a New York premiere, is a portrait of the effusive and charming Ziggy Gruber, a Texan and third-generation delicatessen man who currently operates one of the country’s most acclaimed delis, Kenny and Ziggy’s in Houston. The documentary sheds light on the larger story of Jews in America—immigration, upward mobility, and food—and features interviews with Larry King, Jerry Stiller, and foodies sharing memories of pastrami.