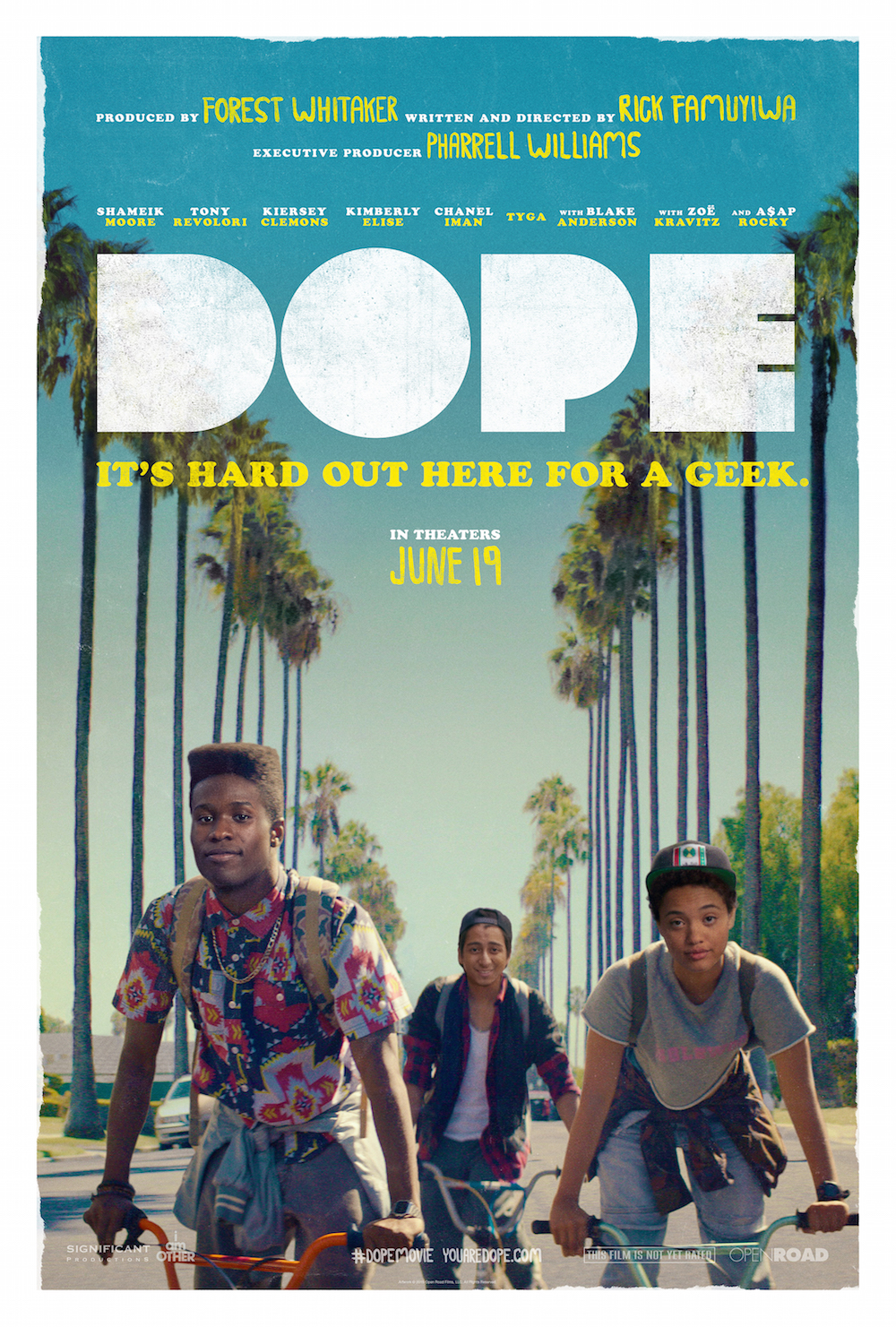 Dope is a coming-of-age comedy/drama for the post hip-hop generation; its main characters are obsessed with ‘90s hip-hop. Malcolm (Shameik Moore) is warily surviving life in “The Bottoms” in Los Angeles, while juggling college applications, academic interviews and SATs. His dream is to attend Harvard. A chance invitation to an underground party leads him into a gritty adventure filled with offbeat characters and bad choices that could allow him to go from being a geek to being dope to ultimately being himself. Open Road Films will release the film nationwide on June 19, 2015.

An Unexpected History celebrates Moët Hennessy’s hundred-year relationship with African American culture, as well as the role of African Americans in shaping the brand’s identity and success. The film recounts Hennessy’s historic role in bringing respect and opportunities to Black professionals and consumers, by focusing on the remarkable achievements of two of the brand’s most influential Black executives.

John Singleton’s classic saga tells the story of a group of childhood friends growing up in a Los Angeles ghetto.

A Black man in NYC struggles with bipolar disorder, while his girlfriend and mother learn to deal with the pain of his manic episodes and struggle for mental survival.

A pastor, an aging widow, and a socialite with cold feet visit a luxurious Gullah Sea Island resort to be rejuvenated by its holistic setting.

After committing the carnal sin of sleeping with his best friend’s girlfriend, Vincent must deal with the consequences of his betrayal and hope that his bond with his brother-from-another-mother can withstand the blow

Four girlfriends travel to Puerto Rico for a destination wedding and chaos ensues when the low-key wedding turns into a disaster.

John of God is the world’s greatest musician…in his own mind.

Convinced prescription drugs will fix his mind, a mentally disabled man leaves Brooklyn for the first time to find the one doctor who he believes can cure him.

A woman’s last night alone before settling down is sidetracked by a chance meeting with an attractive stranger.

A young girl from the Brooklyn housing projects goes from the subway to the runway, becoming one of the most sought after models in the fashion industry. But in the high stakes world of fashion and beauty, things aren’t always as pretty and glamorous as they seem.

A Lower East Side bartender becomes entangled in a murder mystery involving a desperate woman, a missing drug dealer and the scion of a powerful investment firm.

THE NIGHT BEFORE
2015/USA/86min/HD/World Premiere

A “ladies man” must face his own fear of commitment while hosting his best friend’s bachelor party.

A woman becomes trapped in a murderous web deception and uses her gift of discernment to discover the truth.

An attorney from a prestigious law firm falls in love with a beautiful woman of his dreams, but later discovers her father is seeking revenge against him over a court case gone terribly wrong.

In a culture requiring an ID card and commitment to the code, an African American couple is about to find out just how far the boundaries can be pushed….

A young boy commits an accidental murder, which causes a stir in the community and forces him to choose between his loyalty to the gang he belongs to OR saving what’s left of his innocence by turning himself into the police.

Soul mates Sara and Michael carry on their first date as the world comes to an end.

A Nigerian middle-aged woman living in America struggles to convince her traditionalist husband not to circumcise their ten-year-old daughter.

Stanhope is a drama about a teenage inner-city kid from Brooklyn who gets caught up in a web of violence as a paid assassin.
ABFF WEB ORIGINALS – GROUP 1

A naive, chaste acting student (Josh) seeks guidance from his immoral problematic roommate in hopes to become a leading man.

Pragmatic hipster Jay Miller’s successful small business of selling sex to his collegiate peers becomes infinitely more difficult when one of his employees dies while “working.”

ALL ABOUT THE MCKENZIES
2014 UNITED KINGDOM 20:51 MIN HD World Premiere

All about comedy, all about drama, it’s All About The McKenzies.

The life of an actress who wants to be more than just Black.

To raise money to launch their own business, four girls turn their Lower East Side apartment into a lucrative nightclub.

A successful businesswoman and a grieving housewife struggle to overcome loneliness in the face of a shared tragedy.

A comedy about a guy so fed up with traditional dating he commits to having only one-night stands.

Employees of the “Everyone’s a Little Racist (EAR) Agency” do their best to tackle every race problem that comes through their door, but for lead agent Akosua Miller, the biggest case of all may be her own…
ABFF DOCUMENTARY COMPETITION

The following films compete for the Best Documentary award. One winner will be announced during the “Best of the ABFF” awards ceremony, Sunday, June 14.

Althea Gibson, a truant from the rough streets of Harlem, emerged as a most unlikely queen of the highly segregated tennis world of the 1950s.

An American Ascent documents the first African American expedition to tackle North America’s highest mountain, Denali, while shedding light on the complex relationship many African Americans have with the outdoors.

A poignant authorized feature documentary on the life and legacy of Nat King Cole.