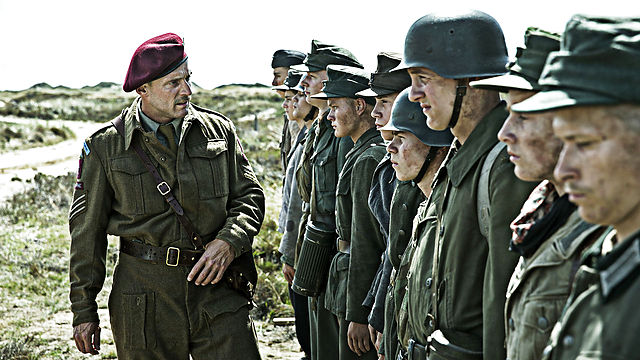 Taking place in May 1945 only a few days after the end of the war, the film tells the story of how a group of German prisoners of war were brought to Denmark and forced to disarm the two million land mines that had been scattered along the West Coast by the German occupying forces. In charge of the enfeebled young men performing the dangerous task is Sergeant Carl Leopold Rasmussen. Like so many of his fellow Danes, he has a deep hatred for the Germans after having suffered five years of hardships during the occupation. He lets his rage rain down on the prisoners, until one day a tragic incident makes him change his view of the enemy even if it may be too late.

Actor Roland Møller takes his first lead as the Danish sergeant in charge of the prisoners. Møller made his screen debut in Tobias Lindholm and Michael Noer’s prison drama “R” and went on to perform in Lindholm’s “A Hijacking” and Noer’s “Northwest”.

Among the Danish cast is also Mikkel Boe Følsgaard (“A Royal Affair”), while the young Germans all are amateur actors, discovered through Berlin-based casting expert Simone Bär who has collaborated with Michael Haneke, among others.

Zandvliet’s debut feature “Applause” (2009) received numerous awards, with quite a few directed at the film’s lead actress Paprika Steen. The film was selected for the Toronto Film Festival, as was Zandvliet’s second feature, “A Funny Man” (2011), which also enjoyed great domestic success with a total of 10 Robert and Bodil awards, Denmark’s highest film distinctions.