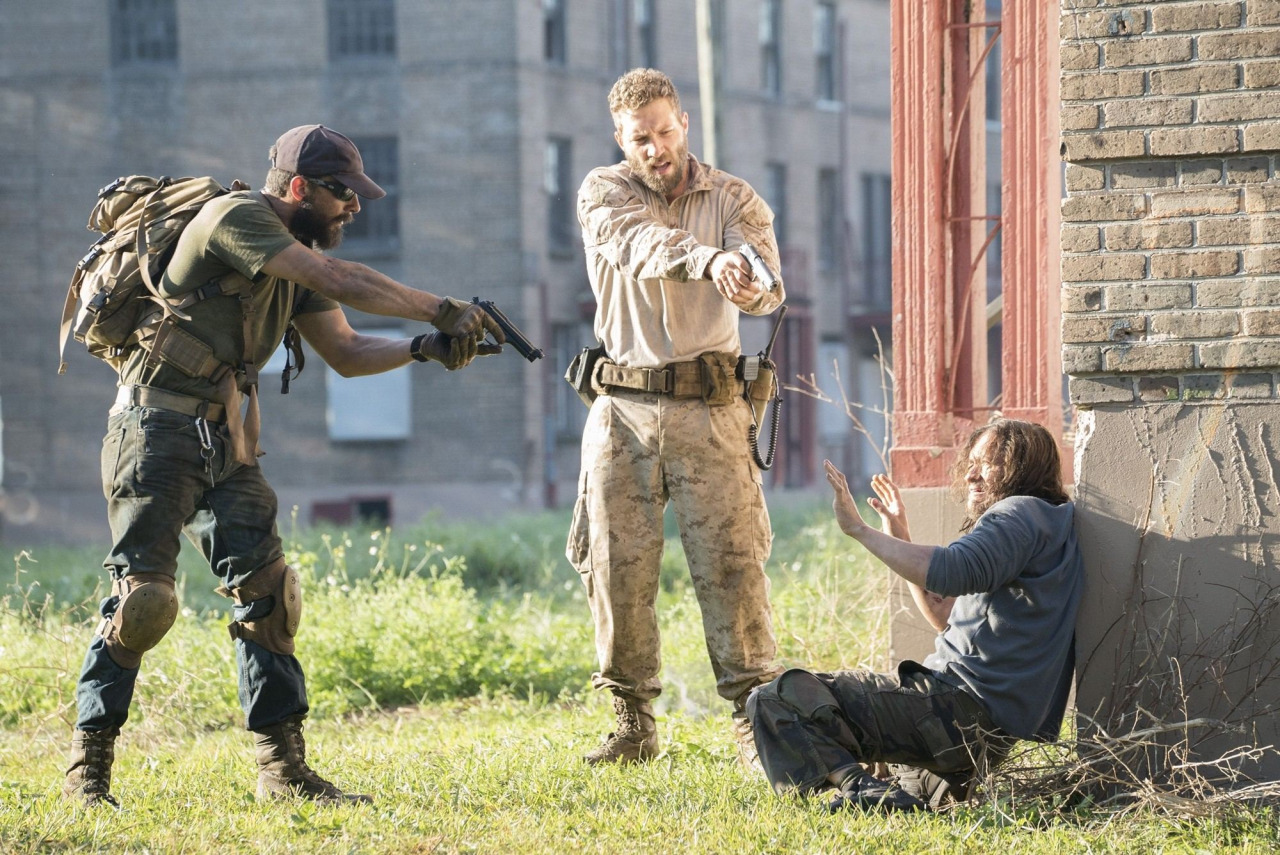 Man Down
Dito Montiel, USA North American Premiere (pictured in main image)
In a savage post-apocalyptic America, U.S. Marine Gabriel Drummer searches desperately for the whereabouts of his estranged son and wife. Accompanied by his best friend, a hard-nosed Marine whose natural instinct is to shoot first and ask questions later, the two intercept Charles, an apocalyptic survivor carrying vital information about the whereabouts of Gabriel’s family. By revisiting the past,
audiences are guided in unravelling the puzzle of Gabriel’s experience, and what will eventually lead to the origin of this war-torn America. Starring Shia LaBeouf, Kate Mara, Gary Oldman and Jai Courtney.

Miss You Already
Catherine Hardwicke, United Kingdom World Premiere
This honest and powerful story follows two best friends, Milly and Jess, as they navigate life’s highs and lows. Inseparable since they were young girls, they can’t remember a time they didn’t share everything — secrets, clothes, even boyfriends — but nothing prepares them for the day Milly is hit with life-altering news. A story for every modern woman, this film celebrates the bond of true friendship
that ultimately can never be broken, even in life’s toughest moments. Starring Toni Collette, Drew Barrymore, Dominic Cooper, Paddy Considine, Tyson Ritter and Jacqueline Bisset

Mississippi Grind
Ryan Fleck, Anna Boden, USA Canadian Premiere
Gerry is a talented, but struggling poker player about to be swallowed up by his unshakeable gambling habit. But his luck begins to change after he meets the young, charismatic Curtis. Gerry convinces his new lucky charm to hit the road with him, towards a legendary high stakes poker game in New Orleans. The highs and lows unveil the duo’s true characters and motivations, and an undeniable bond forms between them. Starring Ben Mendelsohn, Ryan Reynolds, Sienna Miller, Analeigh Tipton and Alfre Woodard.

Closing Night Film.
Mr. Right
Paco Cabezas, USA World Premiere
Martha is unlucky in love, but when she finally meets her Mr. Right it seems like she’s found her match — even if he’s an international hitman on the run from the crime cartels who employ him. On the bright side, as long as Hopper or Shotgun Steve don’t kill them first, these two may actually have a chance at happily ever after. Starring Sam Rockwell, Anna Kendrick, Tim Roth, James Ransone, Anson Mount, Michael Eklund and RZA.

45 Years
Andrew Haigh, United Kingdom Canadian Premiere
While preparing for their 45th anniversary, Kate and Geoff’s marriage is shaken with a discovery that calls into question the life they’ve built together, in this emotional tour-de-force. Starring Charlotte Rampling and Tom Courtenay.

About Ray
Gaby Dellal, USA World Premiere
The touching story of three generations of a family living under one roof in New York as the life-changing transformation by one ultimately affects them all. Ray is a teenager who realizes that she isn’t meant to be a girl and decides to transition from female to male. His single mother, Maggie, must track down Ray’s biological father to get his legal consent to allow Ray’s transition. Dolly, Ray’s
lesbian grandmother, struggles to accept that she now has a grandson. They must each confront their own identities and learn to embrace change and their strength as a family, in order to ultimately find acceptance and understanding. Starring Naomi Watts, Elle Fanning, Susan Sarandon, Tate Donovan, Linda Emond, Sam Trammell and Maria Dizzia.

Angry Indian Goddesses
Pan Nalin, India World Premiere
A comic drama about a group of Indian women finding their hearts and losing their heads! A wild bunch of girls from all over India descend upon Goa. Their closest friend Frieda has invited them to her family home for a surprise announcement: she’s getting married. Thus begins an impromptu bachelorette. Starring Tannishtha Chatterjee, Sandhya Mridul, Sarah Jane Dias, Pavleen Gujral, Anushka Manchanda, Rajshri Deshpande and Amrit Maghera.

Being Charlie
Rob Reiner, USA World Premiere
Being Charlie is based on a compilation of real-life experiences written by two friends who lived through being stuck in the cycle of rehab. Eighteen-year-old Charlie Mills is a sharp-mouthed addict fighting to get back home, while his father constantly stiff-arms him to limit the distractions during a big election for governor of California. Charlie’s parents are at odds about their son’s return to rehab.
Following a feeble attempt at an intervention, he agrees to work the program at a new adult rehab facility where he meets a handful of misfit personalities; among them is Eva, a beautiful but troubled girl, and Travis, a supportive house manager. Charlie’s internal struggle with his addiction is confronted by the envy for his best friend and his separate addiction with Eva. Starring Nick Robinson,
Morgan Saylor, Devon Bostick, Cary Elwes, Susan Misner, Common and Ricardo Chavira.

Body (Body/Cialo)
Małgorzata Szumowska, Poland North American Premiere
Set in Poland, this absurdist dark comedy follows the intertwined stories of a criminal prosecutor, his anorexic daughter, and her therapist who claims she can communicate with the dead. Starring Janusz Gajos, Maja Ostaszewska and Justyna Suwala.

Equals
Drake Doremus, USA North American Premiere
In a futuristic, utopian society known as the Collective — where inhabitants have been bred to be peaceful and emotionless — a man and a woman discover that they have feelings for one another. Together, they attempt to understand this connection. Starring Kristen Stewart, Nicholas Hoult, Guy Pearce and Jacki Weaver.

I Saw the Light
Marc Abraham, USA World Premiere
This film tells the story of legendary country western singer Hank Williams, who in his brief life created one of the greatest bodies of work in American music. The film chronicles his meteoric rise to fame and its ultimately tragic effect on his health and personal life.
Based on Colin Escott’s award-winning biography. Starring Tom Hiddleston, Elizabeth Olsen, Bradley Whitford, David Krumholtz Cherry Jones and Maddie Hasson.

ma ma
Julio Medem, Spain/France International Premiere
This is the story of Magda. Confronted with tragedy, she reacts with a surge of life that flows inside of her, from the imaginable to the unimaginable. Accompanied by her closest circle, she will live the most unexpected situations filled with humor and delicate happiness. Starring Penélope Cruz, Luis Tosar and Asier Etxeandia.

The Meddler
Lorene Scafaria, USA World Premiere
Marnie Minervini, recent widow and eternal optimist, moves from New Jersey to Los Angeles to be closer to her daughter. Armed with an iPhone and a full bank account, Marnie sets out to make friends, find her purpose, and possibly open up to someone new. Starring Susan Sarandon, Rose Byrne and J.K. Simmons.

Mr. Six (Lao Pao Er)
Guan Hu, China North American Premiere
With his son captured, Mr. Six and his old pals stand up to the new, younger generation of hooligans, defending their dignity as once respected gangsters in the neighborhood. Starring Feng Xiaogang.

Mustang
Deniz Gamze Ergüven, Turkey/France/Germany North American Premiere
It’s the beginning of the summer in a village in the north of Turkey; Lale and her four sisters come home from school, innocently playing with boys. The supposed debauchery of their games causes a scandal with unintended consequences. The family home slowly turns into a prison, classes on housework and cooking replace school, and marriages begin to be arranged. The five sisters, driven by the same desire for freedom, fight back against the limits imposed on them. Starring Gunes Sensoy, Dogba Doguslu, Tugba
Sunguroglu, Elit Iscan, Ilayda Akdogan, Ayberk Pekcan and Nihal Koldas.

My Mother (Mia Madre)
Nanni Moretti, Italy/France North American Premiere
Margherita is a director shooting a film with the famous American actor, Barry Huggins, who is quite a headache on set. Away from the shoot, Margherita tries to hold her life together, despite her mother’s illness and her daughter’s adolescence. Stars Nanni Moretti, Margherita Buy, John Turturro and Giulia Lazzarini.

Our Brand Is Crisis
David Gordon Green, USA World Premiere
A Bolivian presidential candidate enlists a management team led by damaged but brilliant strategist “Calamity” Jane Bodine, who seizes the chance to beat her professional nemesis Pat Candy, coaching the opposition. But as Pat zeroes in on every vulnerability, Jane faces a personal crisis as intense as the one her team exploits to boost their numbers, in this drama revealing the machinations of political consultants for whom nothing is sacred and winning is all that matters. Starring Sandra Bullock, Billy Bob Thornton, Anthony Mackie, Joaquim de Almeida, Ann Dowd, Scoot McNairy and Zoe Kazan.

A Tale of Love and Darkness
Natalie Portman Israel/USA North American Premiere
Based on Amos Oz’s international best-seller, this is the story of his youth at the end of the British Mandate in Palestine and the early years of the state of Israel. The film details young Amos’s relationship with his mother and his birth as a writer, looking at what happens when the stories we tell become the stories we live. Starring Natalie Portman, Gilad Kahana and Amir Tessler.

A Tale of Three Cities (San Cheng Ji)
Mabel Cheung, China International Premiere
Based on the miraculous true story of Jackie Chan’s parents, this film is about the unbreakable bond of love between an opium peddling widow and a former spy on the run. Together they witness love and humanity in the face of war, famine, and overwhelming danger. Starring Tang Wei and Sean Lau.

Truth
James Vanderbilt, USA World Premiere
In the vein of All the President’s Men and The Insider, this is the incredible true story of Mary Mapes, an award-winning CBS News journalist, and Dan Rather’s producer. The film chronicles the story they uncovered of a sitting U.S. president that may have been AWOL from the United States National Guard for over a year during the Vietnam War. When the story blew up in their face, the ensuing scandal ruined Dan Rather’s career, nearly changed a U.S. presidential election, and almost took down all of CBS News in
the process. Based on Mapes’s book Truth and Duty. Starring Cate Blanchett, Elisabeth Moss, Robert Redford, Topher Grace, Dennis Quaid and Bruce Greenwood.

The Wave
Roar Uthaug, Norway International Premiere
Experienced geologist Kristian Eikfjord accepts a job offer out of town. As he’s getting ready to move from the city of Geiranger with his family, he and his colleagues measure small geological changes in the underground. Kristian worries that his worst nightmare is about to come true, when the alarm goes off and disaster is inevitable. With less than 10 minutes to react, it becomes a race against time in order to save as many people as possible, including his own family. Starring Kristoffer Joner, Ane Dahl Torp and Jonas Oftebro.

The Witch
Robert Eggers, USA/Canada Canadian Premiere
A colonial family leaves plantation life and attempts to reap their harvest on a fledgling farm at the edge of an imposing ancient New England forest. Superstition and dread set in as food grows scarce, a family member goes missing, and the children’s play takes on a frenzied and menacing undercurrent. As they begin to turn on one another, the malevolent machinations of an ethereal presence from within the woods exacerbate the growing corruption of their own nature. Starring Anya Taylor-Joy, Ralph Ineson, Kate Dickie, Harvey Scrimshaw, Ellie Grainger and Lucas Dawson.

45 Years A Tale of Love and Darkness A Tale of Three Cities About Ray Angry Indian Goddesses Being Charlie Body (Cialo) (2015) Equals I Saw the Light London Fields ma ma Man Down Miss You Already Mississippi Grind Mr. Right Mr. Six Mustang My Mother Our Brand Is Crisis The Meddler The Wave (2015) The Witch Truth (2015)