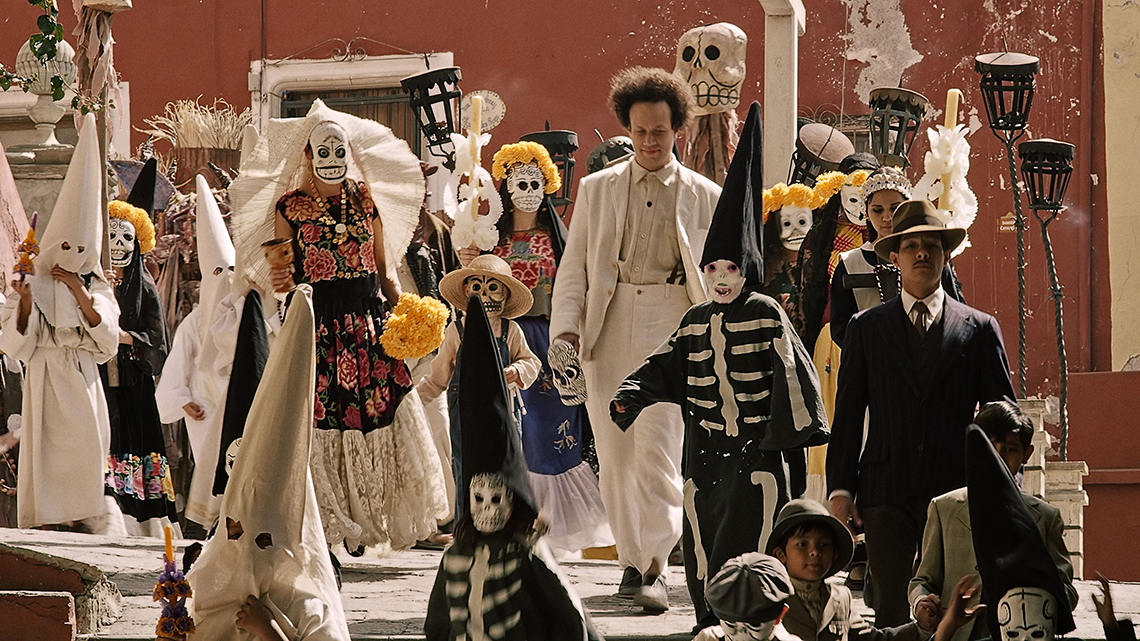 The 27th NewFest will run October 22 to 27 at the newly renovated Bow Tie Chelsea Cinemas, and today announced the lineup of nearly 100 LGBT films around the world. Opening night is the New York premiere of legendary filmmaker Peter Greenaway’s EISENSTEIN IN GUANAJUATO (pictured above), a visually stunning, sexually explicit celebration of pioneering Russian filmmaker Sergei Eisenstein’s gay coming of age during a trip to Mexico in the 1930s. The cinematic masterpiece, which had its world premiere to wide acclaim at the Berlinale this year, has been hailed as one of the finest films of Greenaway’s long, illustrious career.

Closing out the NewFest festival on the 27th is Alexandra-Therese Keining’s GIRLS LOST, a thrilling story about three bullied girls who are drawn into a wild and chaotic journey when they find a magical plant whose nectar temporarily transforms them into boys. Fresh off its world premiere at the Toronto International Film Festival, where it received critical acclaim, Kreining’s bold and stylish coming-of-age tale is a fascinating exploration of sexuality, identity and desire across the LGBT spectrum.

Other narrative highlights this year include the New York premiere of Matt Sobel’s chilling and suspenseful thriller TAKE ME TO THE RIVER, starring Logan Miller, Robin Weigert, Richard Schiff and Josh Hamilton; the New York premiere of Mika Kaurismäki’s sumptuous period piece THE GIRL KING, about the rise and fall of Sweden’s lesbian Queen Christina; the 2015 Sundance World-Cinema Directing Award-winner THE SUMMER OF SANGAILE; and FOURTH MAN OUT, a hilarious and heartwarming twist on the coming-out genre starring Evan Todd, Chord Overstreet (GLEE) and Kate Flannery (THE OFFICE) that won the Audience Award for Dramatic Feature Film at this year’s Outfest Los Angeles.

Another major highlight of this year’s event is the world premiere of Executive Producer Eve Ensler and Katherine Fishers’ upcoming HER STORY, a web series written by transgender activist Jen Richards (I AM CAIT) and writer/actor Laura Zak (#HASHTAG) and directed by Sydney Freeland (DRUNKTOWN’S FINEST), focusing on the dating lives of Trans women in Los Angeles, followed by a panel about the series. Also featured is a SAG-AFTRA panel discussion on the evolution of transgender representation in film and television, to be moderated by trans activist Tiq Milan.

While the mainstream media seemingly embraced trans identities and lives this year, NewFest has set out to dig deeper, looking for fresh stories and unique characters. Highlights include LA VISITA (THE GUEST), a beautiful Chilean drama featuring a breakout lead performance by trans actress Daniela Vega; the documentary PEACE OF MIND about well-known transmale artist and activist Flo McGarrell’s untimely death during the 2010 Haiti Earthquake; and a TRANS SHORTS program featuring the acclaimed shorts A PLACE IN THE MIDDLE and Cheryl Dunye’s BLACK IS BLUE.

Two additional trans documentary programs, TREASURE: FROM TRAGEDY TO TRANS JUSTICE, MAPPING A DETROIT STORY, and the 25th anniversary screening of the rarely-seen documentaries THE SALT MINES and THE TRANSFORMATION offer a chance for audiences to reflect on how much work still needs to be done to protect and empower trans people of color.

Other special events include a can’t-miss Master Class with acclaimed filmmaker Ira Sachs (LOVE IS STRANGE, KEEP THE LIGHTS ON) who will sit for an illuminating discussion about the joys and challenges of being a queer filmmaker, as well as a panel on “The Renaissance of Women In Entertainment,” moderated by New York Women In Film & Television’s Executive Director Terry Lawler.

And because NewFest lands one week before Halloween this year, the festival will present its first ever Queer Horror Night aimed at LGBT horror fanatics, featuring three terrifying tales: Jorge Torres-Torres’ SISTERS OF THE PLAGUE, Jim Hansen’s YOU’RE KILLING ME, and Marçal Forés’ EVERLASTING LOVE, which won the Jury Award for Outstanding International Dramatic Feature at Outfest LA this year.

THE HIGH: MAKING THE TOUGHEST RACE ON EARTH to Premiere in NYC this October | TRAILER