National Geographic and Katie Couric will chronicle the gender revolution in the two-hour documentary GENDER REVOLUTION: A JOURNEY WITH KATIE COURIC.

It used to appear so simple for many of us: you were a boy or you were a girl. Girls wore pink, and boys wore blue; girls played with dolls, and boys played with trucks. Yet around the globe, these traditional notions of gender are changing rapidly, and labels are no longer so clear cut. National Geographic sets out to explore this evolving concept of gender through the lens of science, society and culture in the groundbreaking new two-hour documentary GENDER REVOLUTION: A JOURNEY WITH KATIE COURIC, premiering Monday, Feb. 6, at 9/8c. Produced by Katie Couric Media with National Geographic Studios and World of Wonder Productions, the special will also air on National Geographic around the globe in 171 countries and in 45 languages.

GENDER REVOLUTION will explore the complexities of gender in everyday life, from the moment we are born through our twilight years. To better understand this complex social and scientific issue, Couric crisscrossed the U.S. to talk with scientists, psychologists, activists, authors and families to learn more about the role of genetics, brain chemistry and modern culture on gender fluidity. With conversations that range from the scientifically enlightening to the deeply personal, Couric’s unflinching search for truth sheds light on countless untold stories of struggle, understanding, ignorance, hurt and love.

“It’s hard to avoid hearing about some aspect of gender these days. Every time you check your phone, turn on the TV or scan Twitter, there’s another story that’s challenging our preconceived notions of what gender is, how it’s determined and the impact these new definitions are having on society,” said Couric. “I set out on a journey to try to educate myself about a topic that young people are living with so effortlessly – and get to know the real people behind the headlines. Because the first step to inclusiveness and tolerance is understanding.”

Among those Couric meets on her journey are the following:

Georgiann Davis, an activist who explores how intersex traits are defined, experienced and contested in contemporary U.S. society; intersexuality is a condition doctors estimate affects one in every 1,500 to 2,000 births

Dr. Joshua Safer, an endocrinologist engaged in clinical research who addresses a lack of knowledge on medical topics regarding transgender-identified individuals

Kristina Olson, the director of the Transyouth Project, an organization conducting a 20-year study of hundreds of young transgender and gender-nonconforming kids, as she visits a 12-year-old participant in the study who is considering medications intended to delay the betraying signs of puberty

Transgender individuals of almost every generation – from a 4-year-old in Washington, D.C., to a retiree in California – who with their families face unique challenges as the result of their evolving gender identities

Michaela Mendelsohn, a trans woman who owns six franchise businesses around Los Angeles and who, in response to tragically high jobless rates among transgender people, has dedicated her efforts to hire and promote trans workers at her restaurants

Countless other doctors and scientists who are on the frontlines of gender issues helping shape medical, social and psychological well-being

Further enhancing Couric’s intimate conversations are innovative graphics and animations that will help viewers understand the physiological nature of sex and gender like never before. 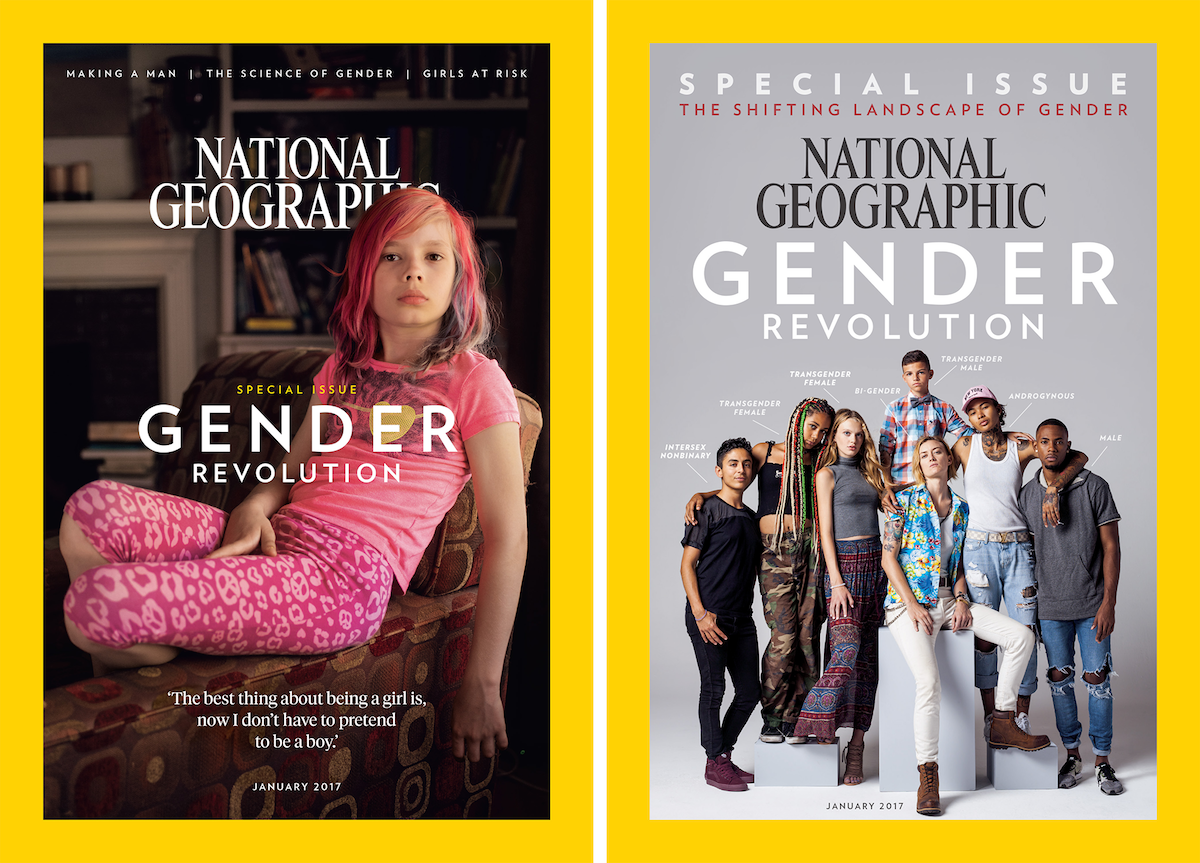 The broadcast premiere of GENDER REVOLUTION will come on the heels of the January 2017 issue of National Geographic magazine. The entire single-topic issue will be devoted to examining gender from different perspectives, providing a 360-degree look at what gender means in science and in social systems and civilizations throughout the world. With powerful storytelling through text, photographs, maps and graphics, paired with video and other content online, the issue will address gender identity and sexuality, coming of age for children in various cultures and the threats that those with certain gender identities face worldwide, among other topics.