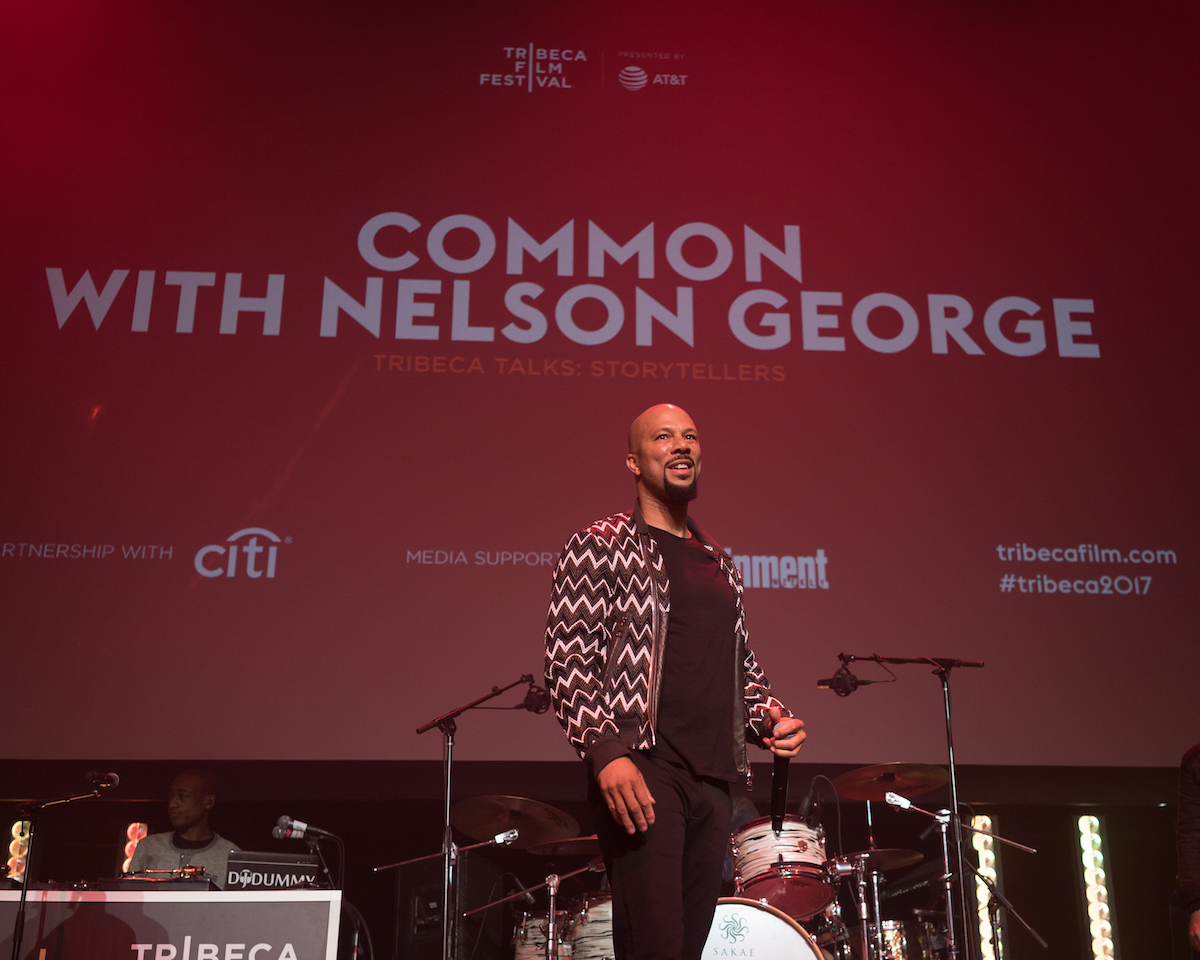 A never-before-seen extended version of Letter to the Free from director Bradford Young debuted prior to the conversation. Common closed out the sold-out event with a live performance, during which the renowned hip-hop artist and actor debuted a new song, “Black Kennedy,” in front of a standing room only crowd.

Excerpts from transcript of the conversation:

Question: Do you believe that when artists, rappers, musicians face some sort of social injustice flashpoint like a Donald Trump or the LA riots to react to, that it drives up the creativity and the timelessness of art, as opposed to when things are going well and the art suffers?

Nelson George: Every historical epoch where there’s conflict, it does help certain artists. Some people can be explicitly political but for others, it becomes an internal journey that can also be just as powerful. One of the best eras of hip hop was the crack era, which was terrible time in the country and under Reagan. And some great art came out of that. Often artists respond with some of their best work because it touches their friends and their community in a way that’s inspiring. And anger, as much as love, inspires art.

Common: Artists, when we have something we’re passionate about, we speak up. It’s the truth that comes out at that time. But you have to be passionate about it. I think this era we’re in now is just as tough as the Reagan era in many instances, but the artists are speaking up. They feel it. They feel it in their spirits. I think the one thing we have in hip hop that you had in that 80s era is a lot of people were kind of educated politically to a certain degree; socially and politically so they knew what to talk about. I was learning about things from Chuck D and from KRS-One and I learned from them. They had something to say. They knew what was going on. I don’t know if it was age or whatever the case, but they knew. And even in this crucial era, I think that the music can be more powerful, the art can be more powerful when people are passionate about it and they really do care.

Common: Well, one day my daughter hit me and was like “You know if Ava is Malcolm X, you Martin Luther King” She’s at Howard now and she was trying to say I was softer than Ava I when it comes to the revolutionary aspect. And I was like embarrassed that she would say that about me. Don’t get me wrong, I do feel like Ava does have an unapologetic and unashamedly Blackness about her and she embraces that and does it universally but I was like DAMN. I do that too. But I think I’m always talking about love and extending the hand of love and embracing people. I’ve learned to embrace people that may not think the way I think or may be on the opposite side when it comes to politics. They may be on the opposite side of many things but my first step is to do what our former First Lady says “Go high when they go low” so that’s my mentality. So when my daughter said that, I said this is what it really is- I tried to explain to her. My relationship with Ava is really inspiring. She’s like for me…through working with her. And talking with her, I see somebody who is dedicated to putting Black culture and Black faces out in the world in the purest way. In a truthful way. In a way we don’t get to see all the time. And it reminds me – you know when you get around those friends, Nelson? well you Black like that so…but you know when you get around friends who just remind you of like who you are and what your mission is and to not be afraid. I think she has a lot of that in her and she’s very talented. And to me, one of her biggest gifts is knowing how to put people together. Because I’ve met some of the most talented and some of my best friends in the industry are people that I’ve met working on projects with Ava.

Common: I definitely have to first say that it was music in the late 80s and 90s was truly reflective of a movement. It was the movement of Black empowerment, Black love, consciousness, just being aware. It was all of the above and obviously, things go through evolutions, it changes. I don’t think right now as a whole, that we have that in hip hop. At that time, the majority of hip hop was a pro-Black movement. We had PE. We had Poor Righteous Teachers, Brand Nubians, Big Daddy Kane would do his pro-Black song. Moe Dee, N.W.A. had stuff that was saying something too. So, I don’t feel like we have that as a whole. I don’t think hip hop is the place we go to listen to that voice of ‘ok this is the revolution. this is how we’re changing things,’ but there are artists that do it, like Kendrick Lamar.

And I also think that the chance that we may not speak about like ‘ok this is Black consciousness. He has a Black consciousness about him, a self-awareness and spirituality,’ and I don’t want to overlook that because spirituality is something that is powerful in hip hop, whether it’s Islamic, the five percenters.

In hip hop, we don’t have it as much, but it still exists. I still can’t go to some hip hop but now, you know, I go to great speakers like Brian Stevenson or books to learn or listen to the people who talk about politics and I honestly try to give my own discernment to decide where I think the world is.