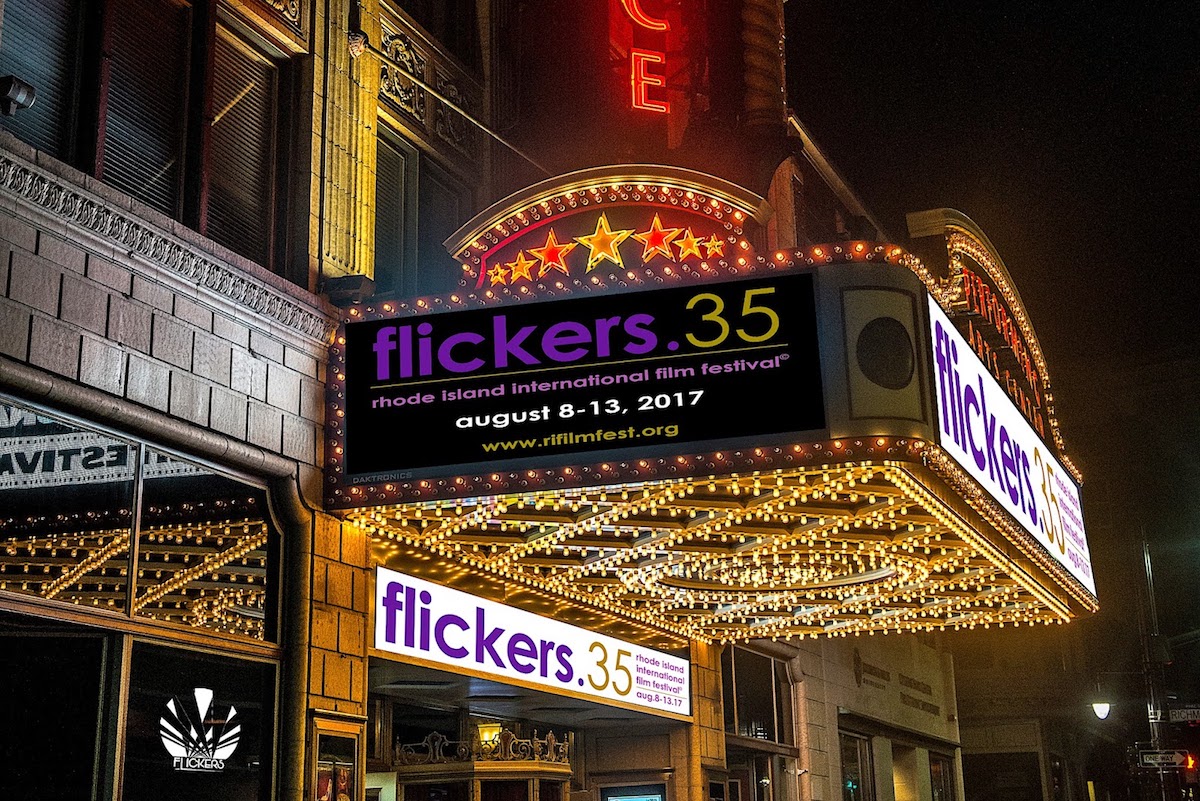 The 21st edition of the festival will honor numerous individuals and organizations including: The RIIFF Screenplay Competition Award will be presented to Tannaz Hazemi from Brooklyn, NY for her screenplay entitled “Dean The Drummer.” The recipients of the 2017 Producer’s Circle Awards presented annually to members of the community who have actively worked to support and promote the mission of the Flickers’ Rhode Island International Film Festival include: The Champlin Foundation, for building the arts and film community; Angela Ryding, Rhode Island Actress and volunteer community leader; and, Anthony Ambrosino, Rhode Island Producer/Director and volunteer community leader.

Coin Operated | Nicholas Arioli, Director | 5 min. USA, 2017
Coin Operated is a 5 minute animated short that spans 70 years in the life of one naive explorer. This film was proudly made by independent artists.

The Eleven O’Clock | Derin Seale, Director | 14 min. Australia, 2016
The delusional patient of a psychiatrist believes he is actually the psychiatrist. As they each attempt to treat each other, the session gets out of control.

Girl of My Dreams | Johnny Wilson, Director | 19 min, USA, 2016
Edward Watson searches for the same thing that most people seek… answers. What he will find to be more important, though, are the questions he needs answers to. As an artist, Edward expresses himself with paintings that reflect his dreams. In those dreams, he sees a girl. She visits him every night, again and again. Awkward and full of insecurities, Edward has searched for the meaning of his dreams by reading books and visiting doctors, never looking in the right places until the day he finds a way to live in his dreams with full consciousness and an awareness that gives him the ability to search for meaning.

Tonight, Edward will explore his own mind to find not only answers, but the questions that he needed to ask that can change his life forever.

What the Eye Doesn’t See | Frédéric Mermoud, Director | 14 min. France, Switzerland, 2016
Alice, 15, has a date with Mathieu. Her friend Julie loans her a pretty red dress, which does not go with her old sneakers. They set out together in search of the perfect pair of shoes, but nothing turns out as expected. This little lesson in cinema looks into the function of match cut: in being shown what a person is looking at, one can understand what that person is feeling.

Seeing Him | Chris Jones, Director | 9 min. United Kingdom, 2017
North American Premiere
In the wake of an ultimatum a middle-aged woman is forced to confront personal boundaries and a disturbing truth, but risks losing her younger lover.

Seeing Him is a bittersweet observation of the complexity of the human heart, explored through a deeply unconventional love affair. If you’ve ever loved someone, then this film is for you.

Mrs McCutcheon | John Sheedy, Director | 17 min. Australia, 2017
North American Premiere
Mrs McCutcheon is a romantic comedy with a big heart. It’s a story about a little boy trying to get the world around him to accept who he is. The film’s central characters feel isolated and unsupported in environments that reflect the complete opposite, a schoolroom that is exploding in fairground colors of craft work, paintings, books and fish; a home that is saturated with fresh floral arrangements on a daily basis.

Mrs McCutcheon is written by Ben Young (Hounds of Love) and directed by multi-award-winning theatre director John Sheedy, in his first foray into the world of film. Despite its short format and streamlined production, it features a stellar creative team and cast including Nadine Garner and Virginia Gay. But more important than that, Mrs McCutcheon aims to give voice to the thousands of trans and gender diverse children.

Cast Off | Sandrine Brodeur-Desrosiers, Director | 20 min. Canada, 2016
Simon has to leave the island on which he lives to go to boarding school. One day, he plays with his sister and finds a beached little wooden boat. Through his attempts to repair it he will accept, or not, to cast off.

Ray & Jenn | Colby Blanchet, Director | 4 min. USA, 2016
This film celebrates the Rhode Island director’s parents and the history of their relationship, and how one instance can spark a lifetime of memories.

The Silent Child | Chris Overton, Director | 20 min. United Kingdom, 2017
World Premiere
Set in rural England, we follow the story of profoundly deaf child Libby. Her middle-class family, consisting of two elder siblings, a constantly overwhelmed mother and a workaholic husband, seek out a quick fix to make their ‘broken’ child more equipped to handle the real world. But when they employ the help of a deaf-specialized social worker it becomes apparent that Libby is not the one who needs to be fixed.

A number of events that RIIFF will hold during the week are targeted toward helping novice and professional filmmakers improve and refine their skills. One of the most popular events is the annual Rhode Island Film Forum, to be held on Thursday, August 10, at the Biltmore Hotel Ballroom in collaboration with the RI Film & Television Office, the University of Rhode Island’s Harrington School of Communication and Media, Johnson and Wales University, Providence College, and Roger Williams University.

The SCRIPTBIZ Screenplay Pitch Seminar  returns on Friday, August 11 for its 18th edition, showcasing this year’s Grand Prize Screenplay Competition winner “Dean The Drummer,” by Tannaz Hazemi from Brooklyn, NY. The SCRIPTBIZ workshop is a great place for aspiring screenwriters looking to make an impact with their work by receiving constructive critique and advice from people with experience in the field. The director of the program, Andrew Lund, Esq. filmmaker and entertainment lawyer, is an Associate Professor and Director of the Integrated Media Arts MFA Program in the Film & Media Department at Hunter College of the City University of New York. The extensive list of panelists will include writer Chris Sparling, actor/director, John Inwood, Emmy nominated cinematographer and Director, and Tatiana Siegel from The Hollywood Reporter, among others.

The popular Providence Backlot Walking Tour takes place on August 9, with the Rhode Island Historical Society exposing attendees to the beauty and potential of the Ocean State’s capital city as a significant location for film production.

On Saturday, August 12th at 12:15, Metcalf Auditorium, RISD Museum, the Festival presents a powerful, thought-provoking and inspiring program entitled: The Power of Film: Can a Film Change the World? This special showcase centers on films that show how very brave people confront the challenges we all face in just living our lives. Discover how these challenges can push all boundaries. Learn how the power of our shared humanity – the daily struggles and fights we all have – can ultimately lead to a new and more empowering future.

The focal point of the event is a presentation of two documentary films: the feature “Stumped” and the World Premiere short, “Life & Atrophy.”

“Stumped” is the story of Will Lautzenheiser who was chasing the loves of his life. A year into a promising relationship, he landed a dream job teaching film. After his first two classes, he visited the hospital for a persistent pain that, unbeknownst to him, was being caused by a deadly infection. To save his life, doctors amputated his arms and legs. In an instant, Will’s life was derailed. Meanwhile, Brigham and Women’s Hospital was performing experimental full-face and arm transplants that restore bodies to unprecedented levels. Risking his life, Will signed up for the experimental transplant program in the hope of regaining his independence. Told as a deeply personal story, “Stumped” reveals how Will copes with the loss of his filmmaking career by pursuing stand-up comedy; navigates an evolving relationship with his partner Angel, who becomes Will’s lover and caregiver; and gradually transforms, physically and spiritually, with newly transplanted arms. Filmed over four years, “Stumped” explores the human spirit and our willingness to overcome challenges when daring to see what lies ahead.

“Life & Atrophy” follows the journey of a family to find an experimental treatment for their son after he is diagnosed with Spinal Muscular Atrophy (SMA). This disease impacts 1 in every 10,000 births and is the leading cause of genetic death in infants by causing progressive muscle weakness. Once children are diagnosed with the condition families are told to go home and love their children because there is no treatment and no cure. The McIntosh family fights to find an experimental treatment for their son Miles in an effort to save him from this debilitating condition. Long years of research have lead to promising clinical trials that might prove effective in combating SMA, giving families and patients hope. Families, scientists, and pharmaceutical companies work together to fix the genetic fate of SMA and provide life, hope, and strength to those affected by the condition. The families of SMA exemplify the fortitude of human strength and compassion, where together we can break out of our genetic shackles.