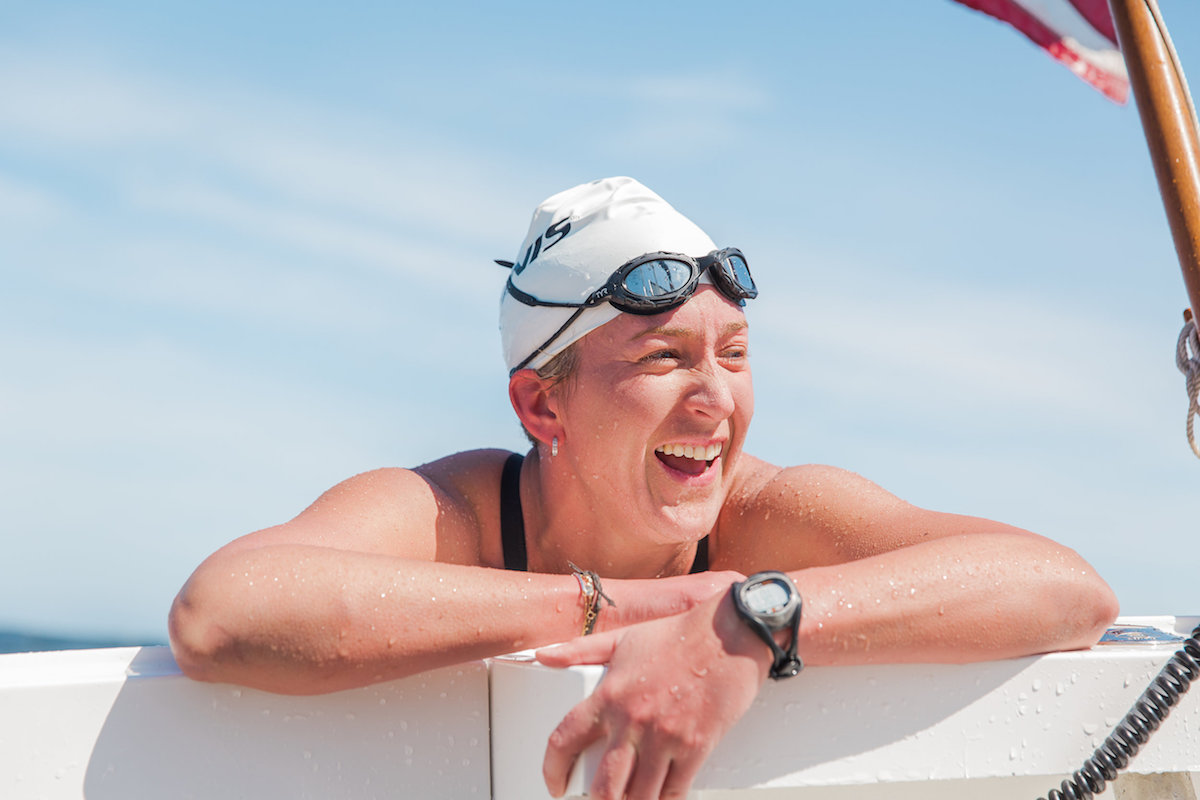 Question: what would you do if your doctor told you your leg would be amputated in half an hour? For Kim Chambers the answer was this: swim 30 miles through shark infested waters. With exquisite timing, on International Women’s Day – March 8, 2018 – the San Francisco based International Ocean Film Festival opens its 15th anniversary year with Kim Swims – the stirring documentary based on Chamber’s epic journey.

A special preview of the film will be shown on Saturday, February 10 during the Festival’s “Off the Reef” gala fundraiser at The Pearl (601 9th Street, San Francisco). The evening will feature food, fine wine and a silent auction: 5:30pm – 7pm cocktail reception; 7pm-9pm dinner and program; 9pm ’til 10:30pm music by DJ Bryce and remarks by this year’s “Ocean Champion” honoree, Academy Award®-winning filmmaker Louie Psihoyos. Individual tickets are $ 250 and can be purchased online.

“It would be hard to find a greater example of personal heroism matched with a love of the ocean than the story of Kim Chambers,” said Ana Blanco, Executive Director for the International Ocean Film Festival. “As told on the screen by Kate Webber and David Orr alongside Oscar-and-Emmy-winner Brad Herschberger, it is the perfect film to open our 15th anniversary season.”

Kim Swims is a documentary about the inspiring story of Chambers, once facing a radical amputation following a freak accident, and her attempt to become the first woman to complete a solo swim from the Farallon Islands to the Golden Gate Bridge – a 30-mile stretch of water known for frigid temperatures, swirling currents and the world’s largest Great White sharks. Many consider it to be the hardest marathon swim in the world, and rightfully so, as only four other men have completed the swim. Through the physically and emotionally challenging lead-up to the swim, the swim itself, and the candid interviews with her and others, we present a look into what propels Kim to conquer her fear, pursue her passion and achieve her greatest potential, and hopefully inspire others to do the same.

Since its launch in 2004, the San Francisco-based International Ocean Film Festival has attracted thousands of spectators of all ages from around the world, including film enthusiasts, sea athletes, educators, and environmental supporters. Since then, the Festival has presented over 50 films from 15 different countries and featured post-film Q&A sessions with visiting filmmakers, special panel discussions with content experts, and the 11th Annual Free Student Education Program. It was the first event of its kind in North America, inspired by the well-established ocean festival in Toulon, France, which has continued to draw large audiences for more than 40 years.

The full slate of films for the 15th Anniversary International Ocean Film Festival will be announced January 19.