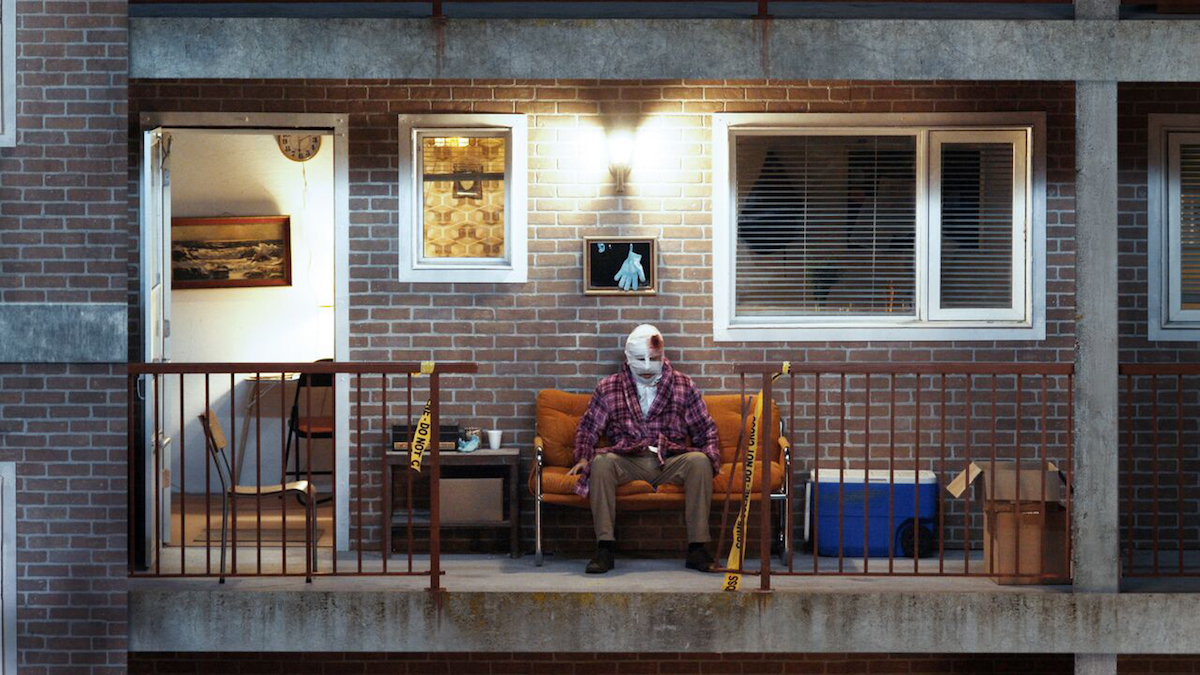 Accidence is based on music composed by Ensign Broderick, an enigmatic experimental songwriter from Toronto, Canada. The song, officially titled “Accidence PSA,” is found on his forthcoming album Feast of Panthers, to be released on March 9, 2018. To illuminate his unique creative process, Ensign Broderick recently shared two alternate versions of the song as an accompanying Triptych.

In a deadly and maddeningly endless loop of crime and punishment, Accidence explores the narrative potential of the mundane architectural projection. In Maddin’s words, “Every balcony is a poem, a chant — a muscle! But whoever lives with that extra blueprint luxury of a balcony lives on the wrong side of a cross-section, on the busy, narrative-addled side of something like an ant-farm window, a brazen architectural arrangement selling cheap peeks into the naked sideshows of the quotidian — even the grisly. Step right up! Behold! A ten story wall of solid twitching muscle!”

Based on the metaphor that we are each our own victims, each of us the worst perpetrators of our own worst traumas, and each the most tireless prosecutors of the crimes we commit against ourselves, Accidence follows the nightmarish cycle of a man who hurls to his death a doppelganger of himself from an apartment balcony, and is then pursued by a detective who is yet another doppelganger. The perpetrator is pursued from apartment to apartment, to the homes of his parents, and of his girlfriend, flats where he seeks sanctuary from persecution. By the end of the film, the perpetrator joins his victim in death as he is hurled from the balcony by his lookalike pursuer of justice, who promptly considers himself a perp, and who is promptly dogged by yet another lookalike agent of justice. And endless loop of crime and punishment is thus established. Everyone else living in the apartment block, at least those visible out on their balconies, is also caught in their own personal loops of varying activities. We all live in loops, each of us condemned to repeat ourselves in essential ways.