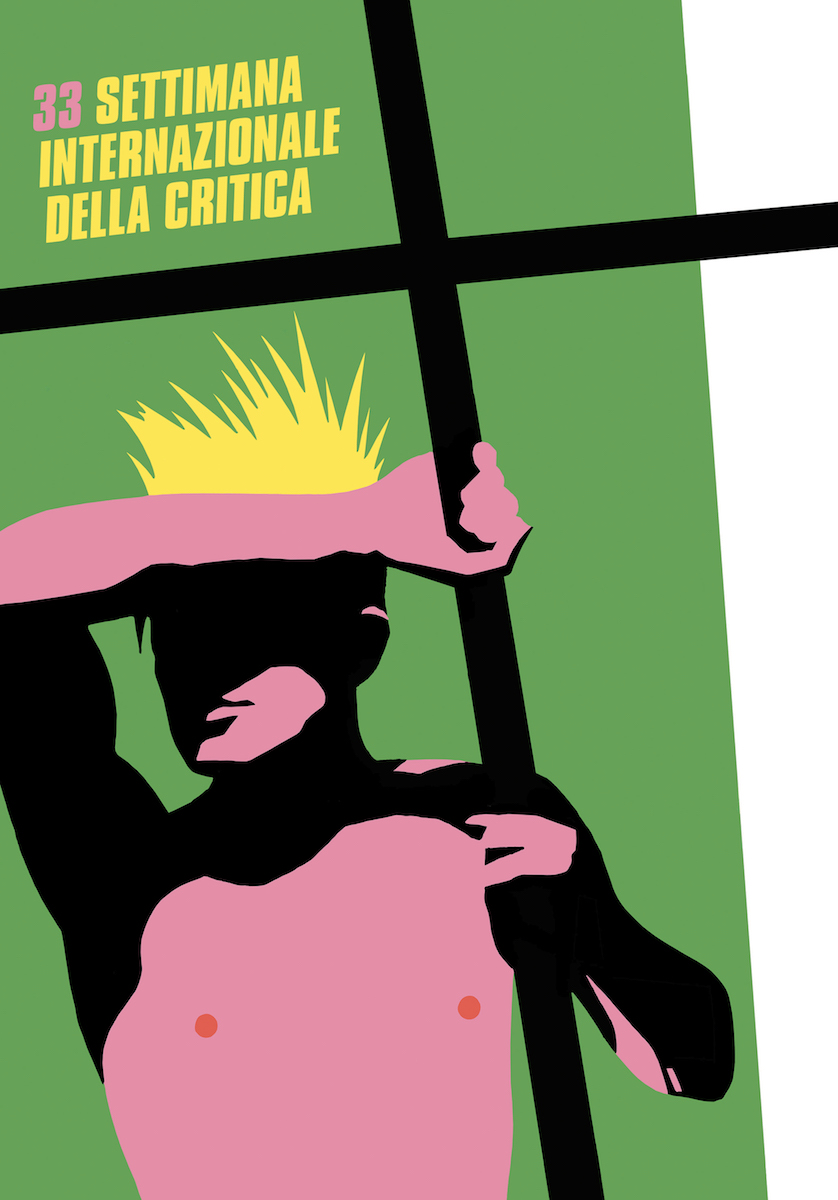 The Venice International Film Critics’ Week  dedicates the poster of its 33rd edition to the unforgettable and stunning creative genius of Stefano Tamburini. Graphic designer and narrator through images, Tamburini greatly experimented with different techniques and visual languages, both in comics and in editorial and advertising graphic design, until he prematurely passed away in 1986. In his brief but intense career, Tamburini marked the history of Italian and international graphic design. The image chosen to represent the 2018 edition of the Venice Film Critics’ Week was created as an editorial illustration and first appeared in issue 11 of Frigidaire magazine. It shows one of the main techniques used by Tamburini, who ransacked fashion magazines and recreated its images through collages of colored cardboards, with an eye on Matisse’s papier découpé and on the advertising illustrations by futurist artist Fortunato Depero. By choosing Tamburini, the Venice Film Critics’ Week goes back to the future, paying homage to an innovative and avant-garde artist who almost forty decades ago re-invented the world of images with a series of extraordinary, ground-breaking “debut artworks”, that still today, carry an astonishing strength of rupture and freshness.

The General Delegate of the Venice International Film Critics’ Week, Giona A. Nazzaro, explained: “Stefano Tamburini embodies the most lively and creative energy of 1977.’You need muscle to do graphic design,’ he used to say. His work announced a clear break with the past. Politics, fashion, music, comics, and graphic design: nothing will ever be the same after the Tamburini tsunami. On Italian graphic design and comics, he had the same devastating impact as the Sex Pistols did on music: a feverish laboratory, pulsing with life, energy and future. Creator of the controversial anti-hero Ranxerox and author of unprecedented musical cut-ups, he is a rallying call for all the creative insurgencies that signposted ‘77. By paying homage to Tamburini, the Venice Critics’ Week consciously aspires to bridge the gap between yesterday’s creative urges and the best energies of today’s finest cinema. A rite of passage. Because the future is not yet written. And the future of cinema even less so.”

Stefano Tamburini (1955 – 1986) – After his debut in 1974 in the underground magazine Combinazioni, Tamburini starts to collaborate as a graphic designer and illustrator for Stampa Alternativa, a counter-information agency based in Rome. Three years later, he actively participates in the actions and struggle of the ‘77 Movement, depicting its mood in the pages of Cannibale, a magazine he created together with Massimo Mattioli, Filippo Scozzari, Andrea Pazienza and Tanino Liberatore. With Liberatore they soon strengthen a fruitful artistic collaboration that will bring to life Ranxerox, the comic book character that will make him famous. In 1980, with Vincenzo Spagna and Filippo Scozzari he founds the monthly comic magazine Frigidaire, which becomes a true space for his graphic experimentation: from collages with coloured cardboard and leftover printing material found in the typography room, to the use of nail polish on fashion photographs, from distorted photocopies to the manipulation of Polaroids. For Frigidaire he also creates comics with non-conventional techniques: painting on fashion photographs or using distorted photocopies combined with Copy Art technique. Furthermore, Tamburini signs a column under the pseudonym Red Vinyle, with which he incarnates an arrogant and ruthless music critic. In those same years, he starts writing lyrics, put to music by Maurizio Marsico, with whom he creates musical and artistic performances in hip places. While Ranxerox’s popularity grows, expanding his presence in the most important international comic books, Tamburini undertakes new creative paths in advertising and fashion. In 1986, at the peak of his success, he passed away. He is only 33 years old.