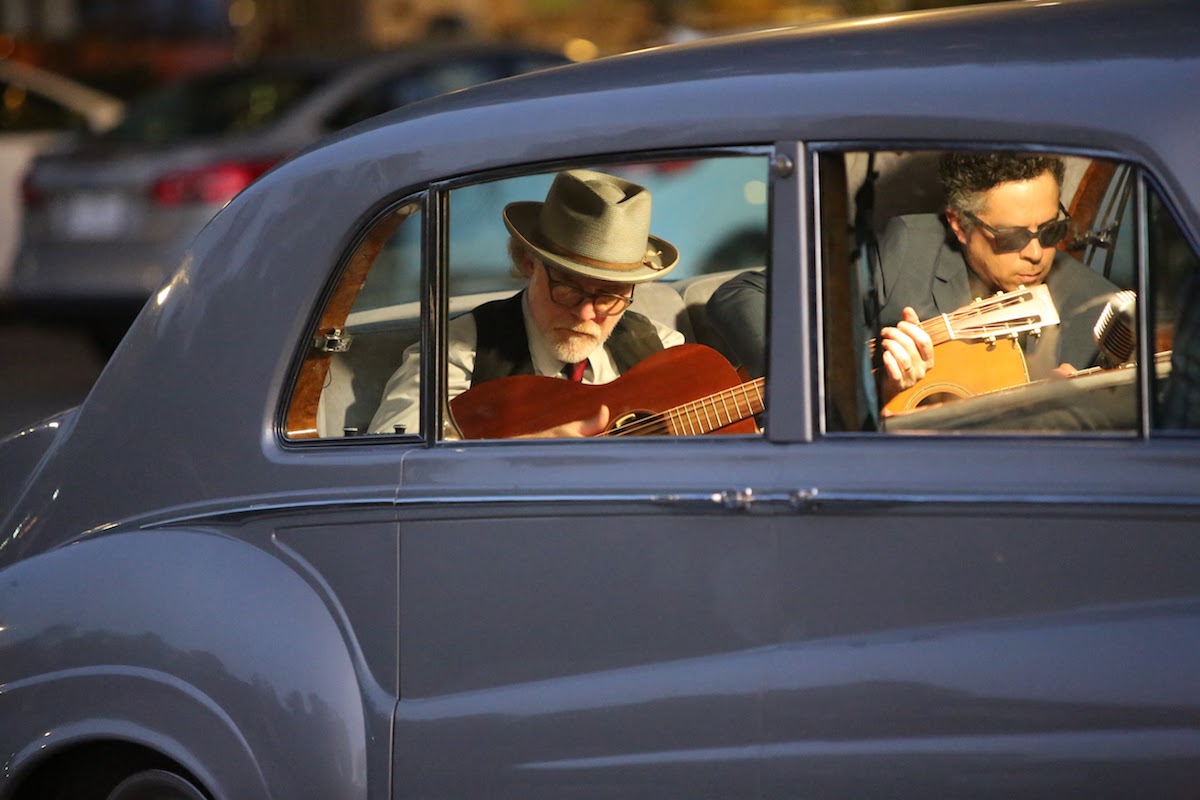 Forty years after the death of Elvis Presley, two-time Sundance Grand Jury winner Eugene Jarecki’s new film takes The King’s 1963 Rolls-Royce on a musical road trip across America in the new documentary The King. From Memphis to New York, Las Vegas, and beyond, the journey traces the rise and fall of Elvis as a metaphor for the country he left behind. In this groundbreaking film, Jarecki paints a visionary portrait of the state of the American dream and a penetrating look at how the hell we got here. A diverse cast of Americans, both famous and not, join the journey, including Alec Baldwin, Rosanne Cash, Chuck D, Emmylou Harris, Ethan Hawke, Van Jones, Mike Myers, and Dan Rather, among many others.

A cross-country road trip in Elvis’ Presley’s 1963 Rolls-Royce, The King is far more than a musical biopic; it’s a penetrating portrait of America at a critical time in the nation’s history and an unflinching investigation into the state of theAmerican dream.

Emmy, Peabody, and Two-time Sundance Grand Jury Prize winner Eugene Jarecki (Why We Fight, The House I Live In) helms this odyssey, retro-fitting Elvis’ Rolls to serve as a vehicle –both literal and figurative –for the journey.

“I set out in Elvis’ car,” says Jarecki, “because he’s the poster child of what we’re taught to think of as the American dream, right? The poor country boy who rises like a rocket and ends up a king. But from there, it gets more complicated, for Elvis and America. For Elvis’ dream ended in a tragedy of lost authenticity, addiction, and self-destruction. And, at this point, I don’t think I need to tell anyone what a tangled mess America has become. But how did this happen? And is there, in the demise of Elvis, a cautionary tale for his country? For the world?”

To investigate these questions, The King traces Elvis’ rise and fall from the Deep South to New York, Las Vegas, and countless points between. Alongside this, the film examines America in parallel, from her auspicious founding to her own struggles with excess power up to the acute challenges of today. This was always Jarecki’s intent, but he could never have anticipated the election of Donald Trump, which happened in mid-production and sent a shock wave through the filmmaking process.

“From the start,” Jarecki explains, “Elvis was a metaphor for the best and worst of America. This was never going to be a puff piece but a cautionary allegory:power and money compromised Elvis’ life and authenticity and did the same to the democratic health of his country. As I went along, the American dream itself came into question. What had it ever been? For whom was it true? For whom not? Suddenly, when a billionaire oligarch was elevated to high office, the story became a warning siren of national, and even global, concern.”

“There’s a conversation going on in the United States that’s much broader and much deeper than what you might imagine from reading news reports,” adds Executive Producer Steven Soderbergh. “A large portion of the country feels that we are at some kind of inflection point, but is unsure what it means, where it’s going, what should be done about it. I think for anybody with just a passing interest in culture, generally speaking,The King is a very detailed, high-resolution snapshot of this conversation that’s evolving in the United States right now.” 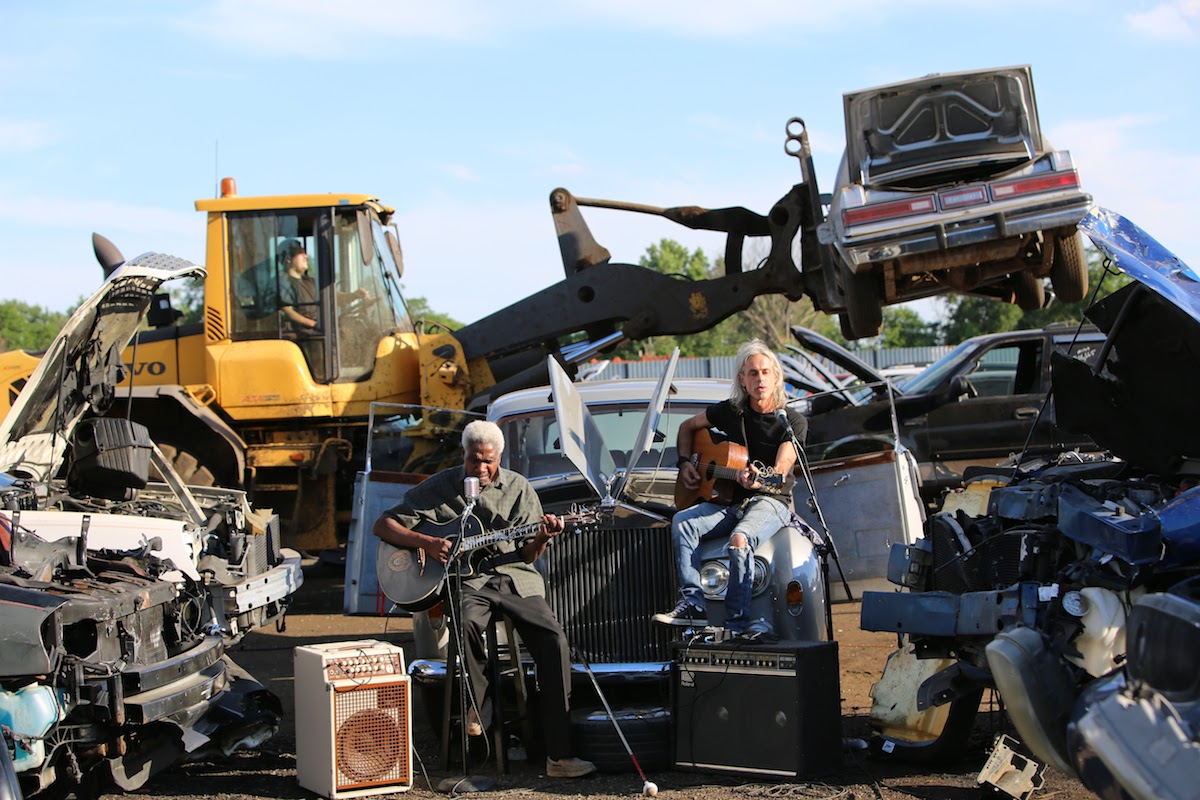 Over thousands of miles, a wide spectrum of Americans –famous and not –join the journey, including ALEC BALDWIN, EMMYLOU HARRIS, CHUCK D, MIKE MYERS, M WARD, VAN JONES, and ETHAN HAWKE, among others. “Poetically, we wanted the film’s cast of characters to reflect the rich tapestry of the American family, expressing themselves in words and, at times, in song inside Elvis’ Rolls.The King is both an Elvis film and a film about the American experience, so we chose people who could speak to either of these in a deep and authentic way.”

“I was drawn to the project because the basic premise of the film is so clean—America has reached its ‘Fat Elvis’ years,” adds co-writer CHRISTOPHER ST. JOHN. “Yet the possibilities for making it are so endless. You can start anywhere. There’s no corner of the country that hasn’t been touched in some way by Elvis, and there’s no person who doesn’t have a strong opinion on the current state of the nation. Ultimately, it’s a metaphor that empowers people to speak eloquently about their concerns for the country.”

“It has a wonderful kaleidoscopic quality that I think is not only unique to Eugene, but also, I think unique to the country,” says STEVEN SODERBERGH. “I don’t know of any other country would allow for the level of exploration that the United States provides just strictly because of its geography. So the idea of Eugene taking Elvis’ Rolls-Royce and driving through the country to talk to people, that’s a very specifically American movie idea. And I think would only work in America.”

“From our first conversation about the film and from his previous work, I knew Eugene was never going to make a standard Elvis biopic or clumsy polemic. But this film is brilliant and essential,” says Executive Producer ROSANNE CASH. “The imagery and interviews so perfectly dovetail that it’s like an epic poem, a narrative ballad, a piece of music that makes us deeply contemplate the state of America. I am thrilled so show it to the world for the conversations it will inspire.”

From countless of his subjects, Jarecki heard the same sentiment –that the American Dream was a thing of the past, something for which people felt an overriding nostalgia.While this resonated with him, he began over time to question his premise. Strangely, his vision became more hopeful as he finished the film.

“After Trump’s inauguration, I guess for a moment I thought that the country had indeed perhaps died on the toilet, choked by our addiction to power, money, and excess. But in the months since, I’ve seen a significant resurgence in public engagement. The body politic is, to some degree, rejecting the transplant of an oligarchic, predatory capitalist into the Oval Office. This is heartening and made me think that maybe all is not lost. It also made me think that perhaps my premise was a bit naïve. The idea that we –and Elvis –were young once and beautiful but then lost our way is dangerously idealistic. It might be more accurate to say that America and Elvis were always imperfect–works-in-progress, full of greatness and shortcomings. While Elvis was ultimately by consumed his, we seem to be very much at work on ours, and there is clearly much work left to wake up tomorrow and do.”