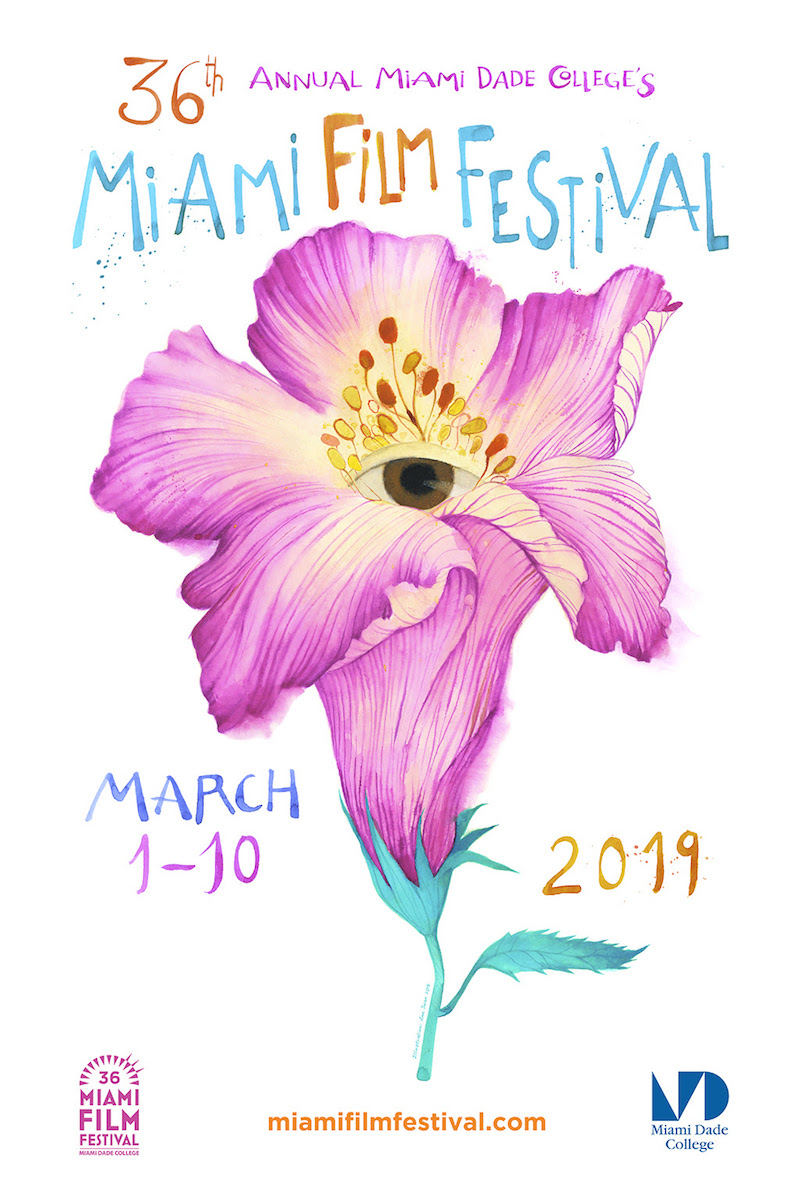 Juan, a frequent contributor of cover art to The New Yorker magazine, has had numerous solo exhibitions of her work over the past 30 years and received a multitude of international awards and prizes, including the National Illustration Award from Spain’s Ministry of Culture in 2010.

Of her creation for this year’s Miami Film Festival poster, Juan stated: “A flower is color, color is life, life is passion and passion makes a dream become true: The dream of cinema.”

The Festival also announced the first four titles for its fall season festival extension, MIAMI FILM FESTIVAL GEMS 2018, scheduled for Oct. 11 – 14. The four films are further distinguished as the first nominees announced for the Festival’s Jordan Ressler First Feature Award competition, which presents a jury-selected $10,000 cash prize to the best film by a filmmaker making their feature narrative debut. The Award is courtesy of the South Florida family of the late Jordan Ressler, an aspiring screenwriter whose life was tragically cut short before he could realize his dream. The Ressler family recently renewed their commitment to the Award through 2023.

The four announced nominees are:

DIAMANTINO (Portugal, directed by Gabriel Abrantes & Daniel Schmidt). A delirious off-beat comedy about the world’s premiere soccer star and underwear model who tumbles from grace due to an evildoer’s plot. Winner of the 2018 Grand Prix NESPRESSO at La Semaine de la Critique, Cannes.

THE HEIRESSES (LAS HEREDERAS) (Paraguay, directed by Marcelo Martinessi). Two upper-class women who have discreetly been a couple for more than 30 years go through a crisis when their worsening financial situation forces them to begin selling off their family heirlooms, and one partner goes to jail for fraud. Winner of numerous international prizes, including the Alfred Bauer Prize and Best Actress for Ana Brun at the 2018 Berlin Film Festival.

HOPELESSLY DEVOUT (MI QUERIDA COFRADÍA) (Spain, directed by Marta Díaz de Lope Díaz). Winner of Audience Award at 2018 Malaga Film Festival, an uproarious screwball comedy in the spirit of early Almodóvar films. When the devout Carmen is passed over for leadership of her local religious guild in southern Spain in favor of a man, her initial despair turns into determination to turn the tables on this sexist situation.

BOYS CRY (Italy, directed by Damiano D’Innocenzo & Fabio D’Innocenzo). Two teenage boys living in the suburbs of Rome fall into service of the local mafia, but their loss of innocence takes them to unexpected places. Winner of the prestigious Nastro d’Argento (Silver Ribbon), Italy’s National Syndicate of Film Journalists Award, for Best First Feature Film of the Year.