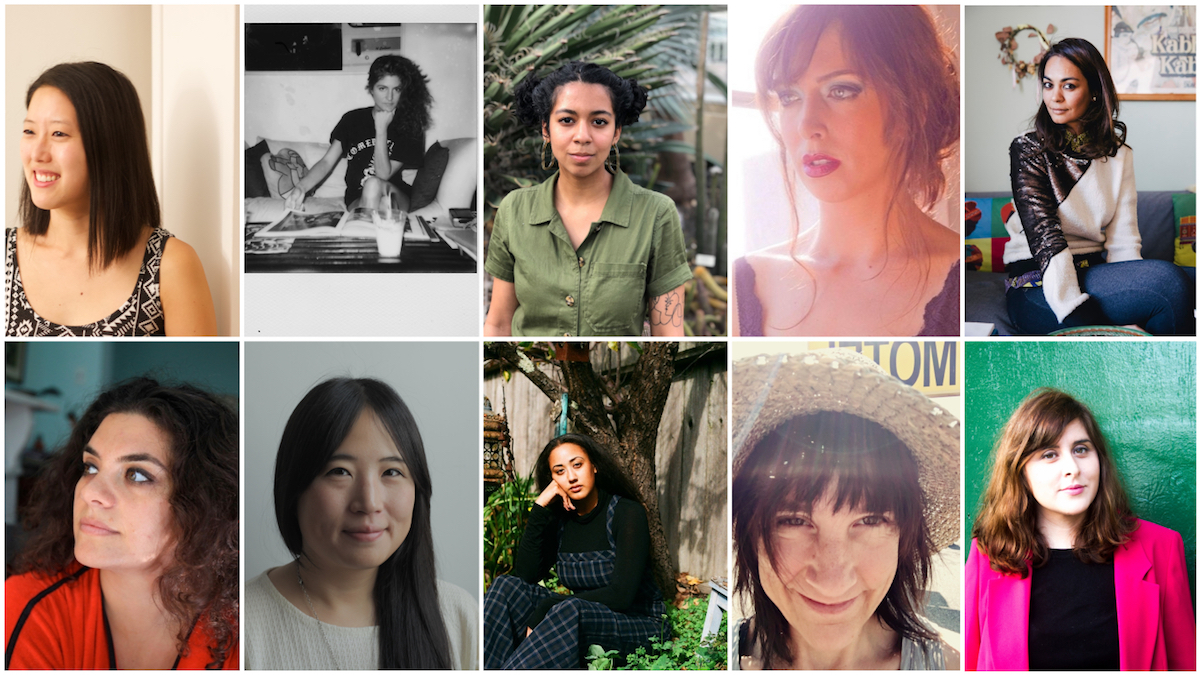 Tribeca and CHANEL continue to provide extraordinary opportunities to propel women filmmakers forward with the fourth annual THROUGH HER LENS: The Tribeca Chanel Women’s Filmmaker Program. The mentorship program was created to provide a balance of industry support, artistic development, and funding for new and emerging U.S.-based female writers and directors of short-form narrative films.

Presented by Tribeca and CHANEL, in collaboration with Pulse Films, and facilitated by Tribeca Film InstituteÒ (TFI), the multi-faceted program has selected five short film projects from women storytellers to receive project support, and take part in one-on-one mentorship and master classes over a three day immersive program. On the final day, each of the five filmmaker pairs will pitch their projects to a jury of industry experts. One filmmaker will be awarded full financing to produce their short film, along with support from Tribeca Studios to make the project. The four other projects will each be awarded grant funds to continue developing their films.

From October 16-18, the filmmakers will gather in New York City with the mentor and program advisors for an in-depth intimate program concentrating on script-to-screen development, casting, finding collaborators, and working with cinematographers, music composers, costume designers, and producers. The selected program participants will attend master classes and have individual mentoring sessions with leading women in filmmaking, meet distributors, and spend concentrated time refining their pitching skills. During the summer, each filmmaker was given the opportunity to work with writing mentors to shape and refine her project.

“In the years since Tribeca launched Through Her Lens with CHANEL, the program has created invaluable opportunities for the next generation of women storytellers,” said Paula Weinstein, EVP of Tribeca Enterprises. “The program brings established women filmmakers together to mentor these emerging voices, provide hands-on guidance and feedback, as well as fund their projects. We’re proud to help expand the pipeline for great inclusive storytelling.”

“TFI’s (Tribeca Film Institute) mission is to join with filmmakers in breaking barriers to access, exposure, and sustainability in the media landscape. The Tribeca Chanel program unequivocally aligns with our nonprofit’s goals to provide this level of meaningful support to women filmmakers of all kinds,” said Amy Hobby, Executive Director, Tribeca Film Institute.

The Leadership Committee participating in the program are:

The selected projects and filmmakers are:

H-E-A-T-H-E-R: Heather, a young, racially ambiguous artist, confronts questions of identity when she becomes a part-time babysitter for 11-year-old Jayda. Their dynamic prompts Heather to explore the limitations of her persona as she voyages into other realms of her imagination through fantasy, alternate realities, and moving collages.

Francesca Mirabella is a writer and director who received her MFA from the NYU Tisch Graduate Film program, where she attended as a Dean’s Fellow. Her shorts have screened at a range of festivals and were most recently featured at the Museum of Modern Art. In 2017, Mirabella won an NYU Wasserman Award for Best Screenplay. A 2017/18 Marcie Bloom Fellow, Mirabella is currently developing her feature Modern Love, which was awarded a Tribeca All Access® grant.

Kylah Benes-Trapp is a visual artist from California currently based in New York City. She works primarily in digital illustration, photography and graphic design and has recently started writing for film. Her work explores ideas of self-expression, femininity, identity and nostalgia. Her purpose is to create a world of possibility through her work that will inspire discovery.

LIFE ON MARS: Six aspiring astronauts are sealed inside a solar-powered dome, attempting to simulate life on Mars. When Dana’s helmet malfunctions on the first spacewalk — depriving her of precious oxygen — she and her teammates have a critical decision to make.

Laramie Dennis attended Wesleyan University and spent 10 years in New York City developing and directing new plays before earning her MFA in Film and Television Production from USC. Her short films have screened at the Vancouver International Film Festival and Short Film Corner at Cannes and have also been presented and distributed by Boyish, Shorts International and Sprint. Her short-form animated series, The Golden Rule, is currently in production.

Jenna Cedicci is an international feature film and commercial producer. She has developed and produced more than 75 commercials and five features to date, three slated for distribution in 2019: the documentary Fire on the Hill, a remake of the classic German film Nosferatu, and the narrative indie feature Daddy Issues.

ROSA: While working at her aunt’s flower shop, Rosa takes her job underground when she begins a side business of shipping undocumented bodies to their home countries for burial.

EL TIMBRE DE SU VOZ: Yaneris, a Dominican teenager, plots a way to escape her hometown of Sosúa, where becoming an escort seems to be her only fate. After unexpectedly falling in love with her client’s son, she decides he may be the ticket to a new life — for both her and her disabled sister.

Gabriella Moses is director, writer, and production designer based in Brooklyn. She is a graduate of the NYU Tisch School of the Arts. She has received support for her work through the New York Women in Film & Television’s 2017 From Script to Pre-Production Workshop, Sundance Institute’s 2018 Screenwriters Intensive and 2018 TFI Network. Moses believes in sharing stories with underrepresented protagonists that push viewers’ perceptions of identity and imagination.

Shruti Ganguly is a filmmaker and the founder of honto88. She has directed numerous videos and is a recovering media executive, with roles at MTV, Condé Nast/Vogue and more recently at NYLON as the Vice President of TV & Video. Her films have been screened at the Sundance Film Festival, Venice Film Festival, Berlin International Film Festival, Telluride Film Festival, and AFI Fest. Ganguly hails from India by way of Oman.

WHAT IS YOUR SOUL PURPOSE?: A sheltered Korean American family travels to Atlanta to retrieve the body of their son after he passes away from an accidental overdose. In the depths of their grief, they find an unlikely connection and momentary solace with the African American family who owns the mortuary.

Jennifer Cho Suhr is a Brooklyn-based writer and director. She is developing her debut feature, You and Me Both, starring Constance Wu and selected for the Tribeca All Access® and Film Independent’s Producing Lab and Fast Track programs. Suhr earned her MFA from the NYU Tisch Graduate Film program, where she was awarded the Tisch Fellowship and a grant from the Spike Lee Film Production Fund.

Carolyn Mao is a Los Angeles-based producer and former development executive. Nice, a pilot she produced by creator Naomi Ko and director by Andrew Ahn, premiered at the 2018 Tribeca Film Festival. She is currently raising financing for You and Me Both. She is a fellow of Film Independent’s Project Involve, Producing Lab and Fast Track programs.

CHANEL and Tribeca work year-round to support women filmmakers, not only with THROUGH HER LENS, but during the annual Tribeca Film Festival with the annual women’s filmmaking lunch and the Nora Ephron Award. The Award was created in 2013 to honor exceptional female filmmakers who embody the spirit and vision of the legendary filmmaker. Women who have received the award include: Meera Menon (Farah Goes Bang, Equity), Talya Lavie (Zero Motivation), Laura Bispuri (Sworn Virgin), Rachel Tunnard (Adult Life Skills), Petra Volpe (The Divine Order), and Nia DaCosta (Little Woods) from this past year.

The 2016 recipient of the THROUGH HER LENS grant, Feathers, directed by A.V. Rockwell, premiered at this year’s Toronto International Film Festival and was acquired by Fox Searchlight. Last year’s main recipient, Suicide by Sunlight, by Nikyatu Jusu is currently in post-production.

Tribeca actively cultivates independent voices in storytelling and has been at the forefront of supporting women filmmakers. This past year, it led the way as the first major film festival to have near equal representation by women directors in its feature film program. THROUGH HER LENS: The Tribeca Chanel Women’s Filmmaker Program—the most recent iteration of Tribeca’s commitment to female artistic voices—continues to provide resources to help empower emerging women storytellers in the industry. The nonprofit affiliate of Tribeca, Tribeca Film Institute, supports female filmmakers through, among other initiatives, its cornerstone grant and mentorship program, Tribeca All AccessÒ. Currently in its 16th year, the program supports scripted, documentary and interactive storytellers from diverse communities, including those that are statistically underrepresented in the industry.

THE PROVIDERS, Documentary on Health Care Providers in Rural America to Premiere at DOC NYC [Trailer]