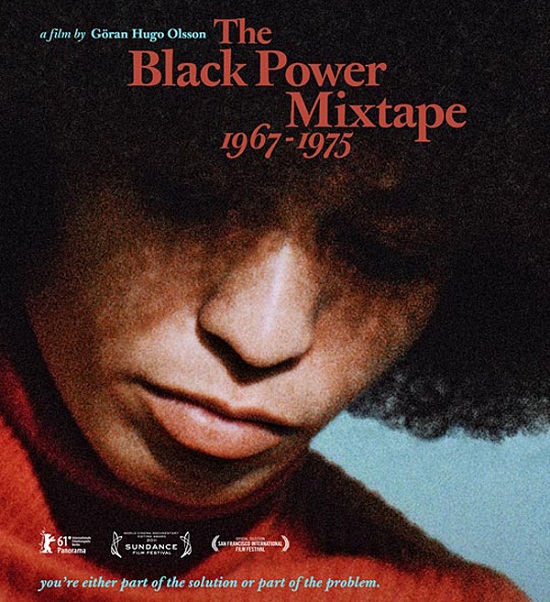 Late ‘60s America was so multi-dimensional, so rife with various and extensive cultural and political facets, it’s difficult to get a true hold on what was really accomplished in that era, since the Civil Rights Movement of the early to mid 1960s. But a LOT surely was accomplished, just as much as so much was left bitterly undone. The “Black Power Movement” of that era, spearheaded by a young, brilliant freedom-rider named Stokley Carmichael, has […] 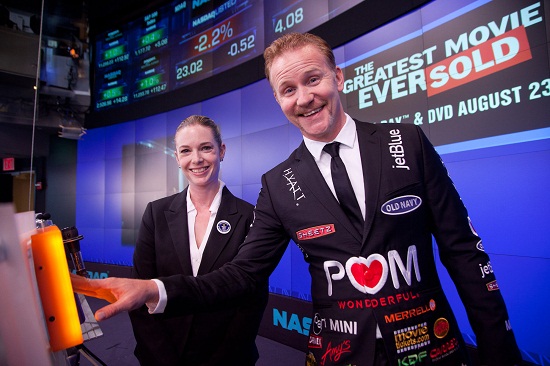 Academy Award nominee Morgan Spurlock visited the NASDAQ on Friday to ring the closing bell in celebration of his film, POM Wonderful Presents: The Greatest Movie Ever Sold, being officially recognized by Guinness World Records as holding the record for the Most Paid-For Product Placements in a Film.     He was joined by Amanda Mochan of Guinness who presented the certificate to Morgan, as well as multiple sponsors of his film, including POM Wonderful, […] 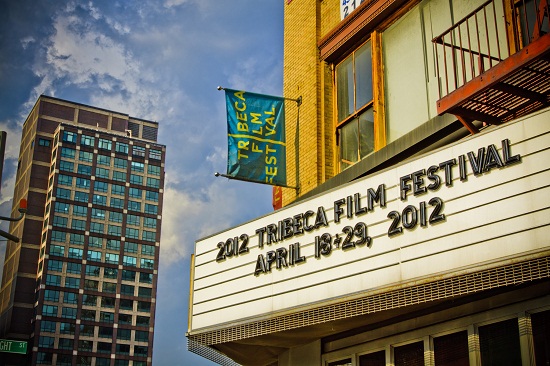 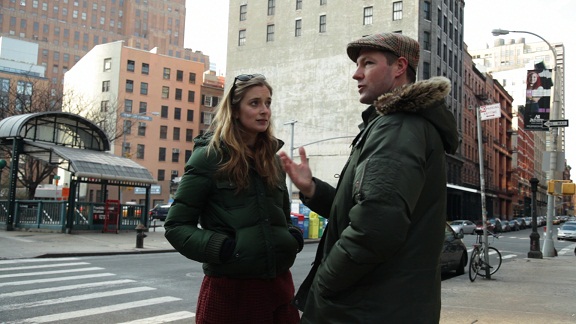 Tribeca Film has acquired Newlyweds, actor/writer/director Edward Burns’ comedic relationship drama that had its world premiere as the Closing Night selection at the 2011 Tribeca Film Festival, and plans a late 2011 release date. Newlyweds is the 10th film written and directed by Burns. Shot in a fast paced 12 days exclusively in New York City’s Tribeca neighborhood, the film is a chronicle of modern marriage complete with the crackling humor and sharp insights into […] 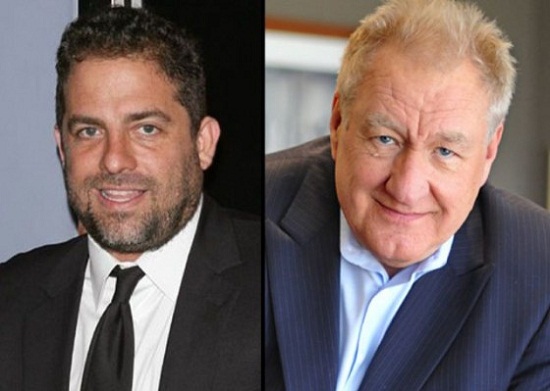 Director, producer Brett Ratner, (“Horrible Bosses,” currently in release) and Don Mischer will produce the 84th Academy Awards. This will be Ratner’s first involvement with the Oscar show; Mischer will for the second year in a row serve as a producer and as the telecast director. “I was so impressed with Brett when I met with him to discuss the Oscar show,” said Academy of Motion Picture Arts and Sciences President Tom Sherak.  “He has […] 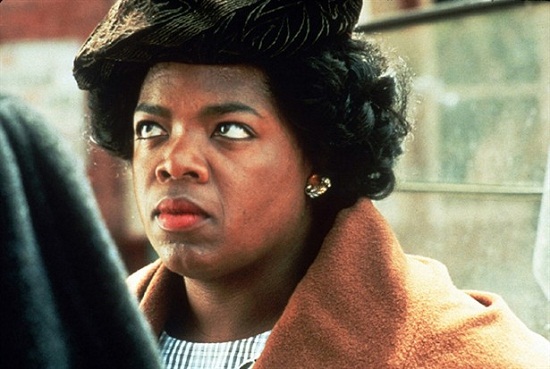 The  Academy of Motion Picture Arts and Sciences will present Honorary Awards to actor James Earl Jones and makeup artist Dick Smith and the Jean Hersholt Humanitarian Award to philanthropist Oprah Winfrey at the Academy’s 3rd Annual Governors Awards dinner on Saturday, November 12. The Honorary Award, an Oscar statuette, is given to an individual for “extraordinary distinction in lifetime achievement, exceptional contributions to the state of motion picture arts and sciences, or for outstanding […] 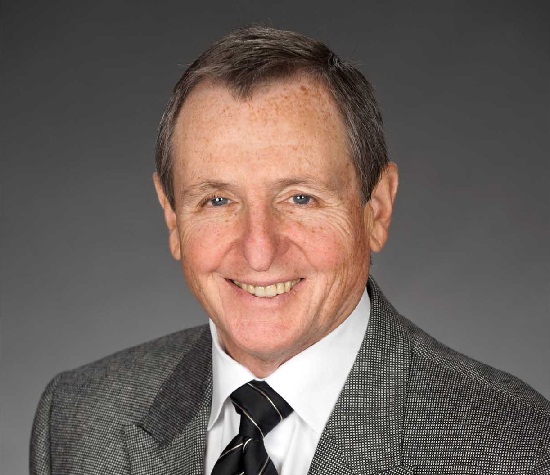 Tom Sherak was re-elected president of the Academy of Motion Picture Arts and Sciences on August 2.  This will be his third consecutive one-year term in the office. Previously, Sherak was a partner at Revolution Studios and prior to joining Revolution, Sherak held various positions at Twentieth Century Fox including senior executive vice president of Fox Filmed Entertainment.  Sherak has been responsible for the launch, distribution and/or post-production of many blockbuster films including “Black Hawk […] 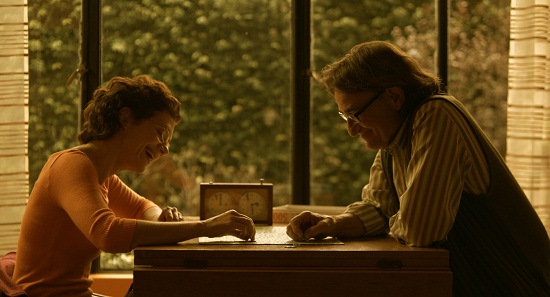 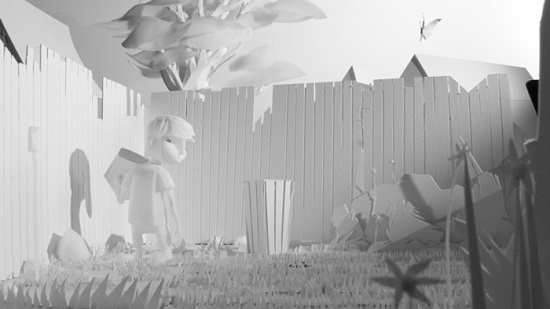 The eighth annual Animation Block Party held July 29-July 31, 2011 in Brooklyn at Rooftop Films and BAMcinématek announced the juried award winners from its lineup of 97 films. The Eagleman Stag from UK filmmaker Mike Please about a man’s obsession with his quickening perception of time, took the top prize ‘Best in Show. The complete list of 2011 Animation Block Party winners are: Best in Show: The Eagleman Stag – Mikey Please / United […] 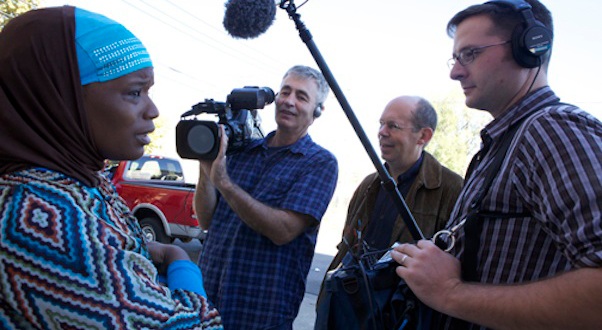 Vimooz Speaks With the Director & Producer of “The Interrupters”

Francesca McCaffery had the great pleasure of speaking with Steve James (Director) and Alex Kotlowitz (producer), who are the creative team who put together the riveting new documentary “The Interrupters,” about gang intervention specialists working the Chicago streets with the unique non-profit, CeaseFire. CeaseFire was founded by epidermologist Gary Slutkin. Slutkin, who battled the cholera and AIDs epidemic in Africa for years, believes that the spread of violence mimics that of infectious diseases. This innovative […]

The 17th Sarajevo Film Festival wrapped up after it’s run from July 22nd thru 30th, 2011, and handed out awards for 2011. The big highlight of the festival was the presentation of the Honorary Heart of Sarajevo award  to actress and humanitarian worker, Angelina Jolie along with Jafar Panahi and Emil Tedeschi. Jolie was in attendance to accept the award. COMPETITION PROGRAMME – FEATURE FILM The Heart of Sarajevo Award for Best Film:BREATHING / ATMENDirector: […] 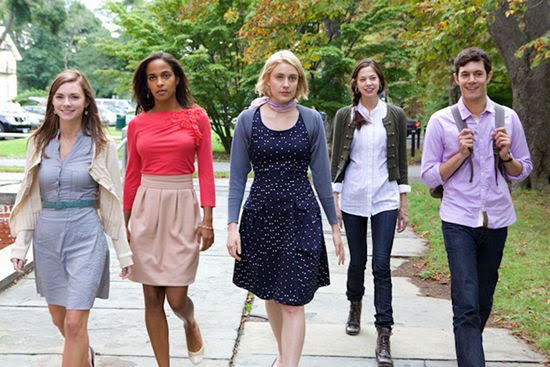 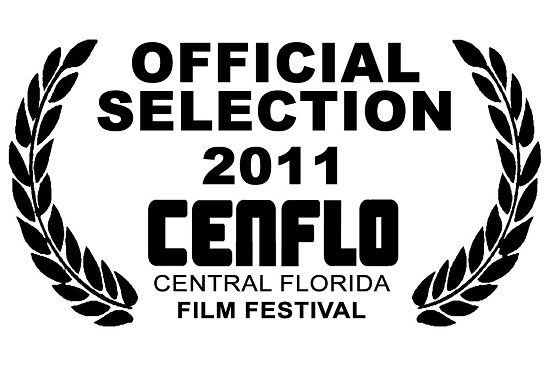 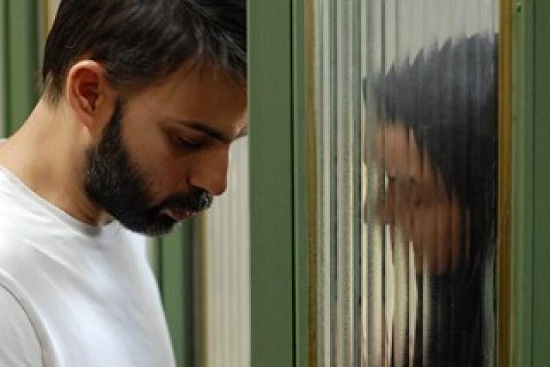 The 32nd edition of the Durban International Film Festival last night announced its award-winners. Winner of the Best Feature Film award, Nader and Simin, A Separation (Iran), directed by Asghar Farhadi, was lauded by the International Jury as a “masterpiece” with “astonishing performances from the ensemble cast”. The Best South African Feature Film was awarded to Skoonheid (France/South Africa), directed by Oliver Hermanus. The jury commended the film as revealing a director on a “remarkable […] 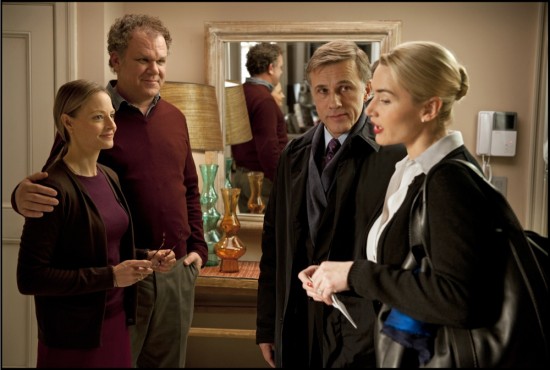 Roman Polanski’s ‘Carnage’ will open the upcoming 49th New York Film Festival scheduled to run September 30 – October 16, 2011. Based on Yasmina Reza’s “God of Carnage”, the 2009 Tony Award-winner for Best Play, ‘Carnage’ follows the events of an evening when two Brooklyn couples are brought together after their children are involved in a playground fight. Produced by Said Ben Said, the Sony Pictures Classics release stars Academy Award winners Jodie Foster, Kate […]

Miranda July follows up her lovely and deft first-time film (and 2005 Palm D’Or winner at Cannes) “Me, You and Everyone We Know” with “The Future,” opening today in limited release. The film strikingly asks these timeless questions: What happens to your soul if you fail to recognize your deepest longings? Will having a child change our lives/make me old/limit my possibilities forever? Can we live without ever having really lived at all, without truly […] 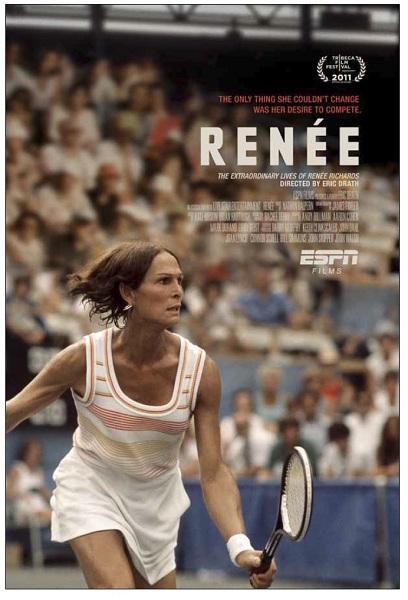 ESPN to Air 7 New Documentary Films in the Fall

ESPN has announced the schedule for a slate of new documentary films that will begin airing Tuesday, Sept. 27, at 8 p.m. ET on ESPN/ESPN HD, and will be aired Tuesday nights throughout the fall. Films include Catching Hell, Renée, The Dotted Line, Unguarded, The Real Rocky, Charismatic and Roll Tide/War Eagle. The new slate will air as follows: Tuesday, Sept. 27, 8 p.m. – Catching Hell (Alex Gibney/Gary Cohen) *120 minutes Tuesday, Oct. 4, […] 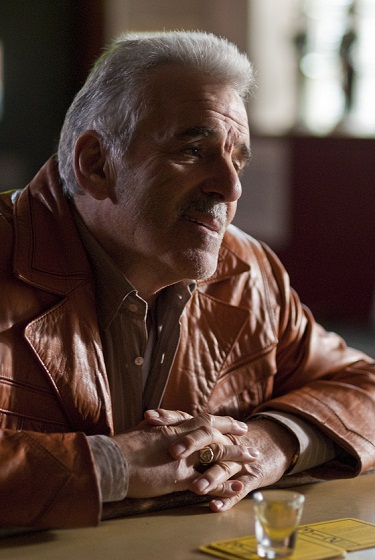 Tribeca Film to release The Last Rites of Joe May, starring Dennis Farina

The Last Rites of Joe May, written and directed by Joe Maggio which had its world premiere in competition at the 2011 Tribeca Film Festival, will be released in October on VOD and theatrically by Tribeca Film. In the spirit of classic 1970’s filmmaking, Joe May is the story of a sixty-something Chicagoan named Joe May (Dennis Farina, Get Shorty, Midnight Run, Snatch), a short-money hustler of Rolex knockoffs and bootleg DVDs. Joe returns home […] 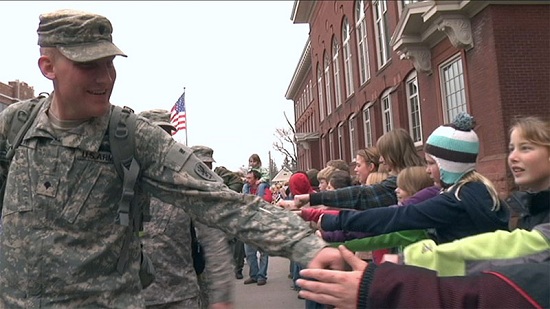 Where Soldiers Come From documentary to open in New York on Friday, September 9

Where Soldiers Come From, a documentary by Heather Courtney, and official selection at 2011 SXSW (Winner, Jury Award for Editing), the Los Angeles Film Festival, Silverdocs and many other film festivals will open in New York at the Village East Cinema on Friday, September 9, 2011.  The Los Angeles release (and other cities) will follow. From a snowy small town in Northern Michigan to the mountains of Afghanistan and back, WHERE SOLDIERS COME FROM follows […] 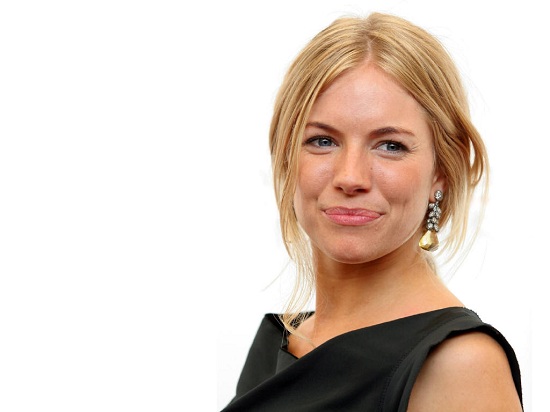 Sienna Miller is headed to New Mexico to shoot an independent film. According to the AP, the film, Just Like a Woman, will be shot in and around Santa Fe, Lamy, Zia and Nambe pueblos and Jemez Springs. The film which also stars Golshifteh Farahani and is directed by Rachid Bouchareb, tells the story of a housewife and her belly dancing instructor who head to Las Vegas to enter a competition. 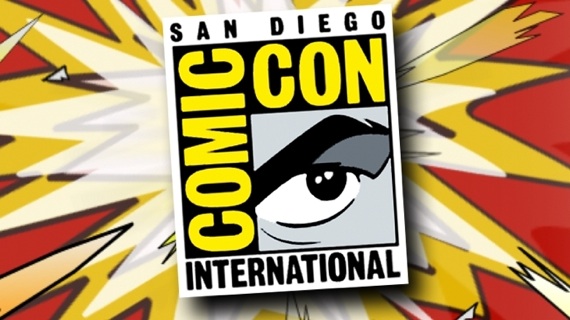 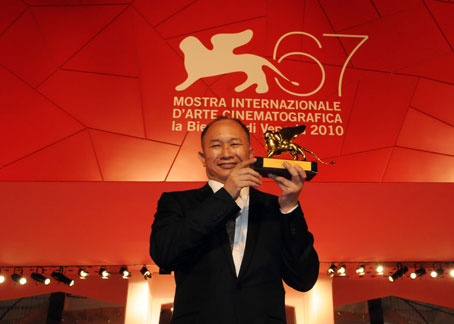 The official line-up of the 68th Venice Film Festival was announced earlier today Thursday July 28th. The official selection of the festival includes the sections, Venezia 68 (In Competition), Out of Competition, Orizzonti and Controcampo Italiano, alongide a retrospective section and two autonomous sections (International Critics’ Week and Venice Days). The 68th Venice International Film Festival will take place from August 31st to September 10, 2011. In addition to George Clooney’s “The Ides of March”, […]