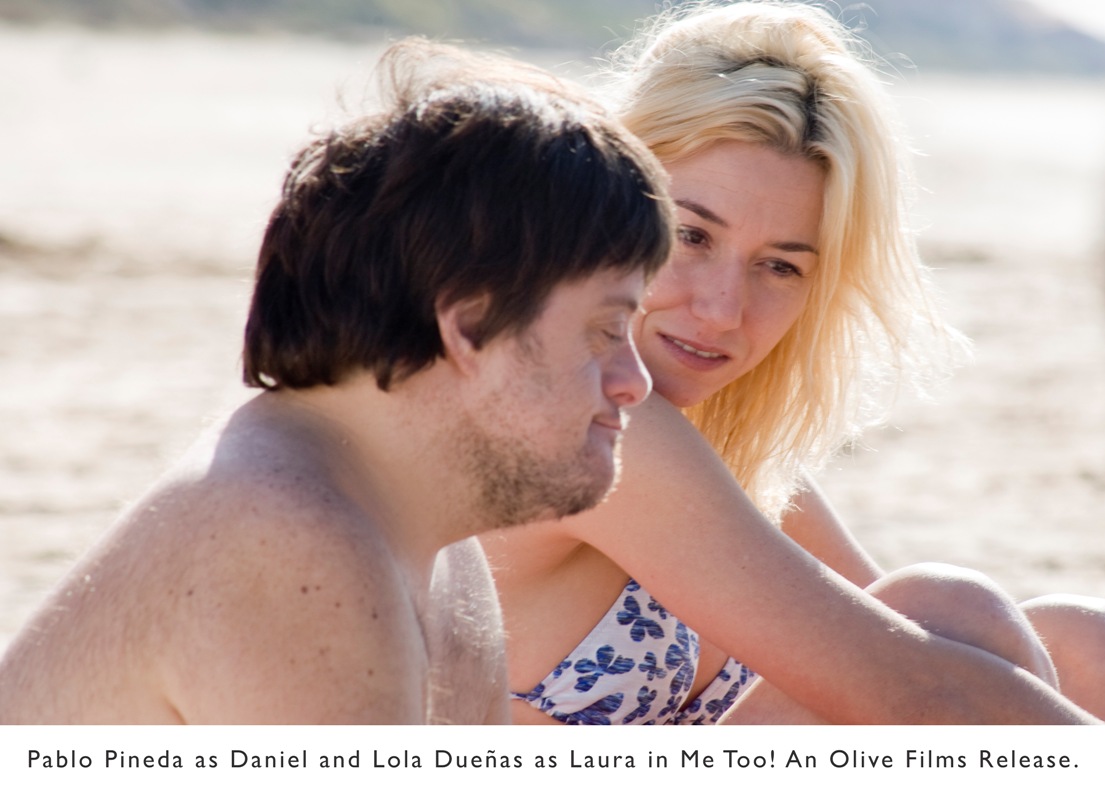 Olive Films will present the US Theatrical release of ME, TOO, a film by Álvaro Pastor & Antonio Naharro.  Nominated for the Grand Jury Prize at 2010 Sundance Film Festival, and Winner of Best Actor and Best Actress awards at 2009 San Sebastian International Film Festival,  as well as GOYA Best Actress Award, ME, TOO will open at Cinema Village in New York on November 19, and at Sunset 5 in Los Angeles on November 26.

ME, TOO, an offbeat romantic comedy focuses on Daniel (Pablo Pineda – a first time actor, who is famous in Spain for being the first person with Down’s Syndrome to earn a University degree) – on his first day as a social service worker in Seville. His parents are proud of him, and his co-workers are careful to be politically correct. They talk down to him until his witty repartees to their dumb questions show he’s as intelligent as they are.

He’s also as interested in the opposite sex as most young men his age, though he has a spontaneity and directness most people lack. He is immediately attracted to the disheveled peroxide blonde at the next desk, Laura (Lola Duenas), a single woman with her own baggage. Her jealous co-workers call her a slut behind her back, but to Daniel she’s a goddess. Disenchanted by a series of one-night stands with boring men, she lets Daniel into her life as a friend but balks at going any further.

Will they or won’t they take their relationship further? As Daniel’s love for Laura grows, so does his longing to be “normal.” Even though Laura is a rebel at heart who scoffs at the idea of normalcy, she is forced — as is the audience — to acknowledge his different looks and way of acting, of which Daniel is very much aware. It’s a Beauty and the Beast romance where the audience is on the latter’s side, even while acknowledging the difficulties of the match.

Álvaro Pastor – Born in Madrid, 1972. He studied screenwriting and film making under Miguel Picazo, and acting under Juan Carlos Corazza and Catalina Lladó. He also studied music at the Madrid Conservatory. He has worked in cinema, television and publicity as screenwriter and/or director, mostly on short features. He has directed and produced five shorts, among which his last one, “Invulnerable”, has won over 40 international awards. He has co-written scripts with Antonio Naharro for the past fourteen years. Together they have written five screenplays and co-directed the short feature “One more, one less”, for which they were nominated to the 2002 Goya Awards.

Antonio Naharro – Born in Albacete, Spain, 1968. He studied acting under Juan Carlos Corazza (Madrid) and Bernard Hiller (Los Angeles and Rome), William Layton, John Strasberg, and others. He is also a graduate of the Gestalt Therapy School in Madrid. Working in cinema, theatre and television, he garners most of his professional experience by means of short features, starting out as an actor and screenwriter and moving into production and direction with Álvaro Pastor on the short feature “One more, one less”, the winner of numerous awards and nominated to the 2002 Goya Award for Best Fictional Short Feature. In 2004, he acted in and co-produced the short “Invulnerable”, directed by Álvaro Pastor, and was awarded several acting prizes in international festivals (Alcala de Henares, Brest, Brussels, etc).

ME, TOO is the directors’ first full-length feature film.

Language: In Spanish with English Subtitles