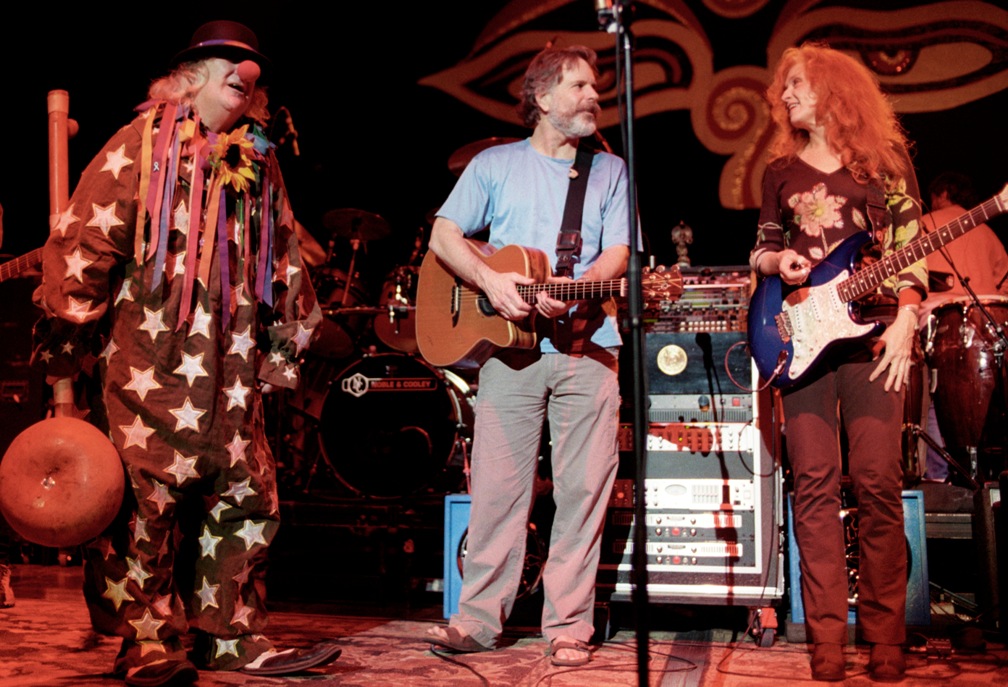 Ripple Effect Films and Argot Pictures  present the US Theatrical release of SAINT MISBEHAVIN’: THE WAVY GRAVY MOVIE, a documentary by Michelle Esrick.  Official selection at SXSW, Mill Valley, Maui and numerous other festivals, SAINT MISBEHAVIN’ will open in San Francisco and Bay Area on Friday, December 3, and at the IFC Center in New York on Wednesday, December 8.  Other cities will follow.

SAINT MISBEHAVIN’ reveals the true story of cultural phenomenon Wavy Gravy – a man whose commitment to making the world a better place has never wavered.  We experience the impact one man can have and connect to the hope that each one of us can make a difference and have fun doing it! As the Village Voice declared, “Wavy Gravy will make as big a fool of himself as is necessary to make a wiser man of you.” Wavy Gravy is known in some circles as the MC of the Woodstock festival, a hippie icon, clown, and even a Ben & Jerry’s ice cream flavor. He is all those things, but in SAINT MISBEHAVIN’ we meet a true servant to humanity who carries his message through humor, compassion and a song he sings where ever he goes, called “basic human needs”.  SAINT MISBEHAVIN’ weaves together intimate verite footage, reflections from an array of cultural and counter-cultural peers (including Jackson Browne, Ramblin’ Jack Elliott, The Grateful Dead, Bonnie Raitt, Ram Dass, among many others), and a rich collection of never-before-seen archival footage to tell a story that is bigger than the man himself.

Wavy Gravy is a life-long activist for peace and personal empowerment, best known for his hippie appearance, personality, and beliefs.  Known to millions as a cosmic cut-up and the inspiration for a Ben & Jerry’s ice cream flavor – “I am an activist clown and former frozen dessert,” he says – but it is because of his advocacy on behalf of the planet and its least fortunate residents that Wavy Gravy has achieved his own brand of sainthood.  His friend and satirist Paul Krassner has called him “the illegitimate son of Harpo Marx and Mother Teresa.”  Wavy says, “Some people tell me I’m a saint, I tell them I’m Saint Misbehavin’.”  Born Hugh Nanton Romney, he grew up in Princeton, NJ.  As a young boy he would take walks with his neighbor, Albert Einstein.  With the political backdrop of the time, it wasn’t a far step to become emerged in the evolving arts scene happening on the other side of the river.  Wavy had an early career in poetry, playing at such clubs as the Gaslight Cafe on MacDougal Street in New York City during the early 1960s, introducing “jazz and poetry” to Greenwich Village.  Marlene Dietrich gave him a book of Rilke poems and Bob Dylan shared his room upstairs, writing on his typewriter the first draft of “A Hard Rain Is Gonna Fall”.

As Hugh Romney he became a traveling monologist, “talking about weird stuff that had happened to me,” he opened shows for John Coltrane, Thelonious Monk, Peter, Paul & Mary, and Ian & Sylvia, and organized the Phantom Cabaret with Tiny Tim and Moondog. Hugh remained in New York until Lenny Bruce, his manager, invited him out west to join other like-minded activists in hopes of gaining a larger audience for his message of peace.  It was here where Hugh found his groove.  In 1965 he and his wife Bonnie Jean were living in a one-room cabin in Sunland, California outside Los Angeles.  Because of local intolerance of their communal lifestyle, Hugh, Bonnie and 40 of their closest friends including the Grateful Dead and the Merry Pranksters were forced to move.  Thus came about the legendary Hog Farm.  Of course, Hog Farm became much better known for its activism off the grounds of farmland.

Peace caravans drove for miles and miles across the country and people could count on Hugh as being a mascot for most of them.  Being pronounced MC of Woodstock almost seemed inevitable.  It was on one of these caravans that Wavy found his name. The moniker was given to him by B.B. King at the Texas International Pop Festival. Wavy’s clown appearance was a response to his incessant arrests at peace demonstrations.  He decided life was easier as a clown, or any other figure that kids wouldn’t want to see being injured by police like Santa Claus or the Easter Bunny.  His inner clown came out and he took it upon himself to learn jokes, magic tricks and entertain children.  Wavy is the “official clown” of the Grateful Dead and has co-founded a circus and performing arts camp called Camp Winnarainbow.  It is located in Laytonville, California, near the legendary Hog Farm. The camp emphasizes experiential learning by urging campers to try new skills. The camp also teaches how to be a positive influence to the community.

Wavy Gravy is living proof that the ideals and beliefs of a generation are being continued today.  His positive influence can be felt the world over and reaffirms that we are all our brother’s keeper.

Michelle Esrick is a peace activist, filmmaker, actress, producer and poet. She has worked on documentaries about social change and music, including Barbara Kopple’s film “My Generation.” Michelle has produced such notable events as “Courageous Resisters” and “Poems Not Fit for the White House” at Lincoln Center.  For the past ten years Michelle has documented the life and message of Wavy Gravy. “Saint Misbehavin’” is Michelle’s first feature-length documentary.