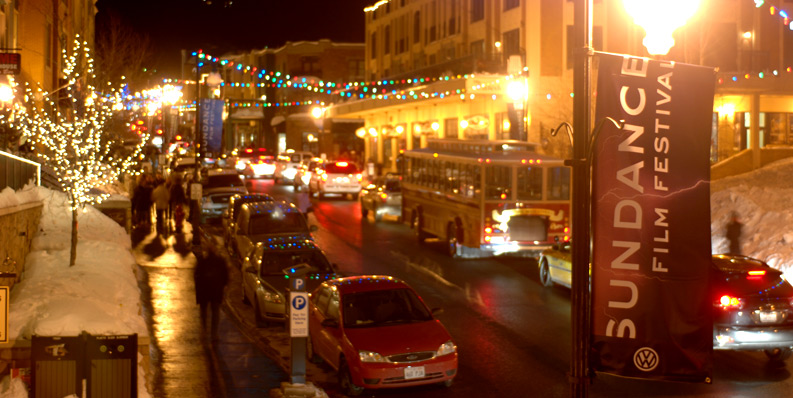 Trevor Groth, Director of Programming said, “The Sundance Film Festival is uniquely a festival of discovery and we are once again privileged to showcase the work of talented new artists, including a special section devoted to Native filmmakers. But it’s also exciting to see returning directors honing their skills and emerging with dazzling new films. And the NEXT section highlights visionary work that shows aesthetic creativity is not limited by budget. All of this speaks to the vibrancy of independent film.”

Eight American films selected for their innovative and original work in low- and no-budget filmmaking. Each is a world premiere.

Bellflower / U.S.A. (Director and screenwriter: Evan Glodell) – A ballad for every person who has ever loved and lost – with enough violence, weapons, action and sex to tell a love story with apocalyptic stakes. Cast: Evan Glodell, Jessie Wiseman, Tyler Dawson, Rebekah Brandes.

The Off Hours / U.S.A. (Director and screenwriter: Megan Griffiths) – A passing truck driver brings an unfamiliar sense of optimism to a woman working the night shift at a quiet diner, reminding her it’s never too late to become the person you always wanted to be. Cast: Amy Seimetz, Ross Partridge, Scoot McNairy, Lynn Shelton, Bret Roberts, Tony Doupe.

Prairie Love / U.S.A. (Director and screenwriter: Dusty Bias) – When a mysterious vagrant living out of his car among the snowy plains discovers a nearly-frozen local with a pen-pal girlfriend, he sees an opportunity to change his lonely existence. Cast: Jeremy Clark, Holly Lynn Ellis, Garth Blomberg.

to.get.her / U.S.A. (Director and screenwriter: Erica Dunton) – Five girls come together for one fateful night where anything goes. They all had secrets, but their friendship was the only thing they knew to be true. Cast: Jazzy De Lisser, Chelsea Logan, Adwoa Aboah, Jami Eaton, Audrey Speicher.
NATIVE SHOWCASE

Following President and Founder Robert Redford’s original vision, Sundance Institute has remained committed to supporting indigenous filmmaking. This showcase highlights new work that contributes to a worldwide understanding of and appreciation for these artists.

GRAB / U.S.A. (Director: Billy Luther) – Three families in the Laguna Pueblo tribe prepare for Grab Day, when they throw groceries from a rooftop to the community waiting below – an annual community-wide prayer of abundance, thanks and renewal. Documentary, narrated by Parker Posey. World Premiere.

INDIGENOUS SHORTS- a program of short films from around the world by Native American and indigenous filmmakers. The seven short films that will be presented together as part of the Native Showcase will be announced on December 6.
SPOTLIGHT

Old Cats (Gatos Viejos) / Chile (Directors and screenwriters: Pedro Peirano and Sebastián Silva) – An old woman who realizes that her mind is quickly deteriorating desperately tries to hide this condition from her daughter, who waits keenly for any sign of senility in order to take her apartment. Cast: Bélgica Castro, Claudia Celedón, Catalina Saavedra, Alejandro Sieveking.

Home to horror films and extreme comedies, Black Dynamite, The Blair Witch Project and Saw are among the films that have screened here.

The Catechism Cataclysm / U.S.A. (Director and screenwriter: Todd Rohal) – After becoming disinterested with the church, a priest tracks down his old classmate, a former metalhead whom he idolized in high school. When the two embark on a canoeing trip together, all hell breaks loose. Cast:Steve Little, Robert Longstreet, Walter Dalton, Miki Ann Maddox, Koko Lanham. World Premiere

Hobo with A Shotgun / Canada (Director: Jason Eisener; Screenwriter: Johnathan Davies) – A hobo hops from a train with dreams of a fresh life in a new city, but instead finds himself trapped in an urban hell. When he witnesses a brutal robbery, he realizes the only way to deliver justice is with a shotgun in his hands and two shells in the chamber. Cast: Rutger Hauer, Molly Dunsworth, Gregory Smith, Brian Downey. World Premiere

Works that push the limits of traditional cinema aesthetics and the narrative structures of filmmaking.

Jess + Moss / U.S.A. (Director: Clay Jeter; Screenwriters: Clay Jeter and Debra Jeter) – Without immediate families that they can relate to, and lacking friends their own age, second cousins Jess and Moss only have each other. A series of visceral vignettes conjure memories of companionship and sexual awakening during a summer shared together on their Kentucky farm. Cast: Sarah Hagan, Austin Vickers. World Premiere.

!Women Art Revolution / U.S.A. (Director: Lynn Hershman Leeson) – One part of a transmedia project that includes the interactive video installation RAW WAR presented at New Frontier, this seminal documentary depicts the history of women artists who have used art as an activist practice to fight oppression and protest gender and racial exclusion – creating what many historians feel is the most significant art movement of the late-20th century. U.S. Premiere

A selection from The Sundance Collection at UCLA to preserve and restore independent films.

Slacker / USA 1991 (Director and screenwriter: Richard Linklater) – Praising the film in the Chicago Sun-Times in 1991, Roger Ebert wrote, Slacker is “a movie with an appeal almost impossible to describe, although the method of the director, Richard Linklater, is as clear as day.” Cast: Richard Linklater, Marc James, Stella Weir, John Slater, Louis Mackey.