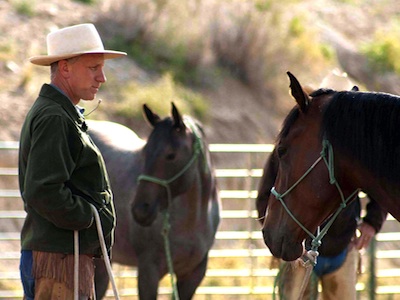 Sundance Selects grabbed the North American rights to the movie, “Buck,” which is playing in the U.S. Documentary Competition section at the 2011 Sundance Film Festival.

Sundance Selects announced today from the Sundance Film Festival that the company is acquiring North American rights to director Cindy Meehl’s BUCK. The film, which is playing in the U.S. Documentary Competition section at the 2011 Sundance Film Festival premiered on Friday, January 21st.  The film centers around Buck Brannaman, a living legend in the horse world, and was produced by Julie Goldman.  Andrea Meditch served as a creative consultant on the film.

The Horse Whisperer may be the stuff of Hollywood legend but the cowboy who inspired the novel and film is very real. Buck Brannaman – master horseman, raconteur and philosopher – is a no excuses cowboy who travels the world teaching a hard-won wisdom that’s often more about human relationships than about horses. He possesses near magical abilities as he transforms horses – and people – with understanding and respect.

Jonathan Sehring, President of Sundance Selects/IFC Films, said:“Our entire company has fallen in love with BUCK. Cindy Meehl’s funny, deeply inspiring and crowd pleasing film about Buck Brannaman has ignited the passion of audiences in Park City and we’re confident the rest of the country will feel the same.  This is the perfect film for our new label Sundance Selects and we could not be more excited to help get it out to the widest possible audience.”

Filmmaker Cindy Meehl stated: “BUCK is about hope, inspiration and triumph over adversity. Sundance Selects is the perfect partner to help us reach a broad audience that has already shown that it is hungry for Buck’s message.”