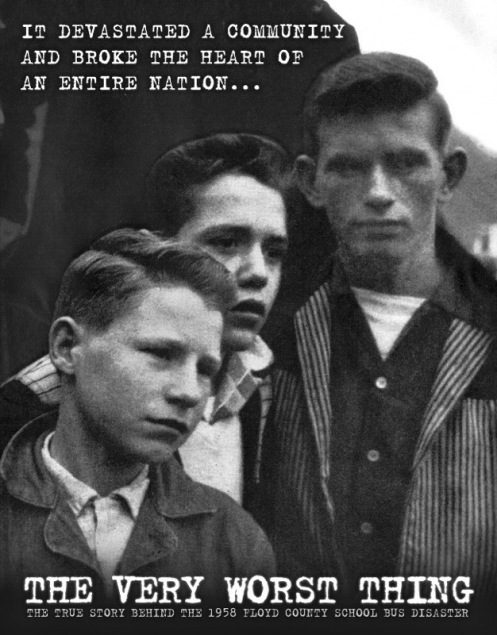 Derby City Film Festival opens this Friday February 18th, 68 films to screen during the three day festival, including 25 international films and 20 from Kentucky filmmakers. The festival will open with a short film screening group from The Bob Rogers Group (BRG), a production company based in Louisville. The BRG film program of 8 short films will be free to attend and begin at 6:00 PM on February 18th. The official opening night film at 8:00 PM will be “The Very Worst Thing” a film about the worst bus crash in US history which took place in Floyd County, Kentucky in 1958. The film is from Georgetown filmmaker Michael Crisp.

In all, 24 films from Kentucky & S. Indiana filmmakers will screen during the festival including four feature films and 21 short films.  A “Kentucky Short Films Program” will screen on Sunday features short films from Kentucky filmmakers. Both the Saturday night Feature Films (“Almost Nothing Good Happens” by Tom Whitus & “Queens of the Dead” by Ray Cart, both from New Albany) were produced and shot in locally and will be World Premieres. Other films from filmmakers with ties to Kentucky and Indiana will screen during the festival as well.

Special screenings include the Bob Rogers Group short films and another 18 short films included in a short film program entitled “Cyber Bros.”; of which all the films are from Russian filmmakers. The festival has also partnered with the Jewish Film Festival which runs concurrently with the DCFF. On Sunday Feb. 20th the two festivals are partnering to screen “Voice Teacher” a documentary from New York. Don Roberts, the voice teacher and Daniel Mendelson, the director will attend and discuss the film. The festival closes Sunday February 20th with the feature film “Hitting the Nuts” from Cincinnati filmmaker Joe Boyd.

This year the festival has added an early Saturday morning screening which features “Figaro: Living in the Moment of a Character” a documentary by D.V. Schaefer about the partnership between the Louisville School of Music and the Szymanowski Academy of Music in Katowice, Poland to perform the opera “Marriage of Figaro”.

Also on Saturday the 19th the festival will hold a filmmaker symposium at Clifton’s Pizza on Frankfort Avenue. The symposium will be held from 5:30 – 7:00 and will offer an opportunity for attendees to meet and greet with the filmmakers in attendance and take part in an informal Q&A about independent film making. The symposium is open to all ticket holders and a pizza buffet will be offered for $8.00 per person.

There will be workshops held during the festival that cover a wide range of topics including: Writing for the Screen,  Green Screen Techniques, Acting, and FX Make-Up. As well as filmmaker Q&A’s following many of the films.

Each of the workshops are hosted by leading regional professionals in independent film and are designed for the experienced filmmaker as well as those just beginning or who have an interest in learning more about the world of independent film. The workshops will be held Saturday and Sunday during the festival and are free for those who purchase a day or festival pass.

The festival has included the audience vote for this edition. Each audience member will be able to vote on their favorite film in each category and the votes will be tallied and will comprise 1/5 of the total jury vote. Awards will be given out following the festival conclusion. There will also be an audience favorite award given out which all films are eligible for. Finalists in each film category will be announced in January.

The 2011 Derby City Film Festival runs February 18th – 20th at the Clifton Center in Louisville, Kentucky. The full festival schedule and film descriptions will be available January 1st, 2011, which is also when tickets go on-sale through the festival website. More information on the jury, workshops and general festival information, can be found at the festival website: www.derbycityfilmfest.com or by calling the DCFF office at 502-618-3192

Screen Media Films to release 'FUBAR: Balls to the Wall'