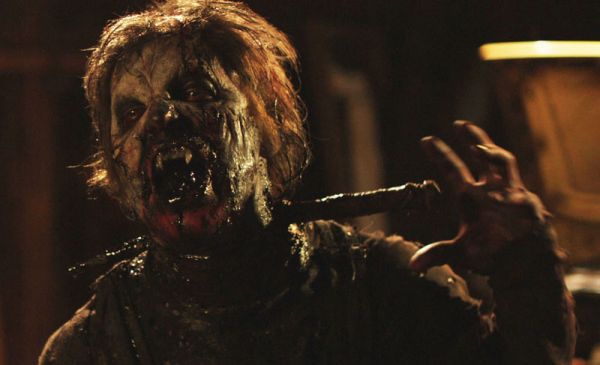 The America of STAKE LAND is a lost nation. When an epidemic of vampirism strikes, humans find themselves on the run from vicious, feral beasts. Cities are tombs and survivors cling together in rural pockets, fearful of nightfall. When his family is slaughtered, young Martin (Paolo) is taken under the wing of a grizzled, wayward hunter (Damici) whose new prey are the undead.

Simply known as Mister, the vampire stalker takes Martin on a journey through the locked-down towns of America’s heartland, searching for a better place while taking down any bloodsuckers that cross their path. Along the way they recruit fellow travelers, including a nun (McGillis) who is caught in a crisis of faith when her followers turn into ravenous beasts. This ragtag family unit cautiously moves north, avoiding major thoroughfares that have been seized by The Brethren, a fundamentalist militia headed by Jebedia Loven (Cerveris) that interprets the plague as the Lord’s work.

Jonathan Sehring, President of Sundance Selects/IFC Films, said: “We are thrilled to again be working with the great Larry Fessenden, as well as with our friends at MPI.  With vampires at the forefront of popular culture and a cast comprised of both horror film legends and up-and-comers, Jim Mickle has made a breathtaking film that will truly excite the IFC Midnight audience.”

Greg Newman, Executive VP of MPI Media Group, said: “IFC Midnight is remarkably consistent in bringing the world’s best genre films to the American market. We are very pleased to have our original production, STAKE LAND, be the newest addition to their extraordinary release slate.”

The deal for STAKELAND was negotiated by Arianna Bocco, Senior Vice President of Acquisitions & Productions for Sundance Selects/IFC Films with Greg Newman of MPI/Dark Sky. STAKE LAND was produced in associated with Off Hollywood Pictures and Bella Donna Productions.

IFC Midnight is a sister division to Sundance Selects and IFC Films, and is owned and operated by Rainbow Media.