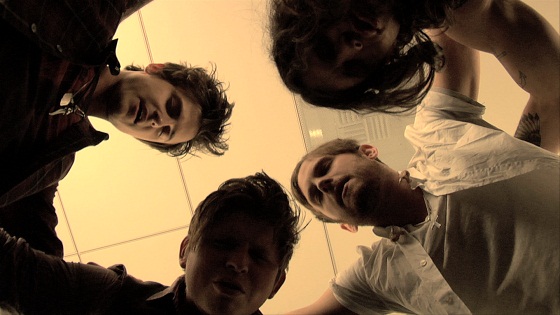 The rock and roll documentary Talihina Sky: The Story of Kings of Leon will celebrate its Oklahoma premiere on Wednesday, June 8 as the inaugural film of the 2011 deadCENTER Film Festival.

Talihina Sky is the story of Kings of Leon, whose strict Pentecostal upbringing in Oklahoma and Tennessee preceded their unlikely transformation into one of the biggest rock bands in the world.

The free, outdoor screening begins at 9:30 p.m. at the 400 block of N. Broadway Avenue.  Running time is 87 minutes.  A Q&A with Director Stephen Mitchell will take place directly following the film.

Due to scenes with graphic content and adult themes, this film is recommended for mature audiences only.

Talihina Sky follows Nathan, Caleb, Jared and Matthew Followill back to Talihina, Oklahoma for their annual family reunion. This reunion serves as a catalyst to explore the band’s roots and the difficulties they faced growing up. Home movies, childhood photos and revealing interviews with family members — including a colorful group of parents, grandparents, aunts, uncles and cousins — expose how the influence of their family has informed the creativity that drives Kings of Leon today.

“10 years ago I witnessed the creation of this family band in their mother’s Tennessee garage. Even then, I was fascinated by their strict Pentecostal upbringing and the eccentric and colorful characters that make up their family,” said Director Stephen Mitchell.  “There was no doubt in my mind that they would become one of the biggest rock bands in the world. My goal with this film was to document the roots of their music and how rock-n-roll transformed their lives.  I am proud and honored to share the story of Kings of Leon.”

Talihina Sky made its world premiere at the Tribeca Film Festival in April.

“The kick-off block party and outdoor screening is always a highlight of the deadCENTER experience,” said Kim Haywood, chief operating officer for the festival.  “Bring your lawn chairs and blankets, and enjoy a great movie with thousands of friends on a huge HD screen, with the nighttime city skyline as a backdrop.  There is nothing quite like it.”