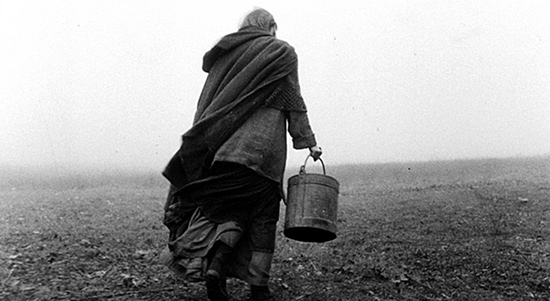 Bela Tarr’s apocalyptic masterpiece “The Turin Horse,” will be released in theaters in the US this winter, by Cinema Guild.

On January 3, 1889 in Turin, Italy, Friedrich Nietzsche steps out of the doorway of number six, Via Carlo Albert. Not far from him, the driver of a hansom cab is having trouble with a stubborn horse. Despite all his urging, the horse refuses to move, whereupon the driver loses his patience and takes his whip to it. Nietzsche comes up to the throng and puts an end to the brutal scene, throwing his arms around the horse’s neck, sobbing. His landlord takes him home, where he lies motionless and silent for two days on a divan until he mutters the obligatory last words, and lives for another ten years, silent and demented, cared for by his mother and sisters. Somewhere in the countryside, the driver of the hansom cab lives with his daughter and the horse. Outside, a windstorm rages.

RIP: Leonard Kastle, Writer and Director of "The Honeymoon Killers"