REVIEWS: One Lucky Elephant and Queen of the Sun:What are the Bees Telling Us– Two essential new docs 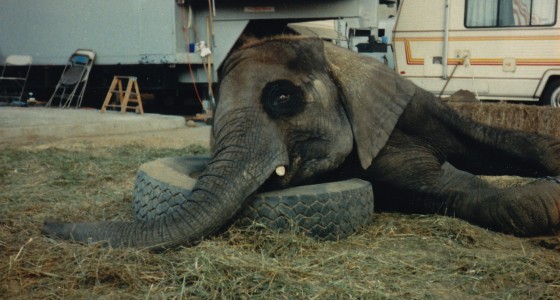 A realistic examination of wild animals living in captivity through the unique story of an elephant and a circus director, One Lucky Elephant is an intimate documentary about a cross-species relationship. Director Lisa Leeman has said that she wanted her film to be character-driven, and she succeeded—the film revolves around the characters David Balding and his elephant that he raised and founded his circus around, Flora. David gives personal accounts of his close relationship to Flora—she is like a daughter to him—and the camera follows him through his struggle to find her a new home, as she has grown out of circus performing. The film crew followed the story for ten years, beginning in 2000, when the idea came up to send her back to Africa to give safari rides; when that fell through the crew stuck with David and Flora as they considered different possible residences for her, from zoos to an elephant refuge in Tennessee. The dramatic pull comes from the question of whether, once Flora is placed somewhere new, it may be time for her to remain independent from David forever.

Leeman focuses much of the time on David but is careful to get every viewpoint of Flora’s situation. One can see from the intimate footage of Flora what a wonderful and smart elephant she is, but to give the audience more of an understanding of the complex inner minds of elephants, and the specific experiences of elephants taken from the wild and put into circuses or zoos, other elephant experts (the co-founder of the Tennessee refuge, and a Miami Zoo elephant keeper) are also interviewed and give their own account of the situation. There is no direct statement against having these animals in captivity—most of the main people interviewed worked in the circus and got their experience with elephants there—but the film presents all the information at hand about how captivity affects elephants’ physical, emotional and psychological well-being. The audience is at once moved by the relationship between David and Flora, but, as the film progresses, unsure if they would wish the fate of being brought up in a circus on any other elephant, no matter how loving the trainer. The technique of initially “breaking” elephants is revealed late in the film as still being less than humane, and other factors of being in captivity are weighed in, but through most of the film, Leeman focuses on this specific elephant’s experiences, and the importance of her bond with a human. In the end, the bond might be greater for David, but the effect his love has had on Flora is also undeniable. Their unique relationship is captured in a bittersweet film that honestly depicts both the positive and negative aspects of a wild animal being raised by a human. 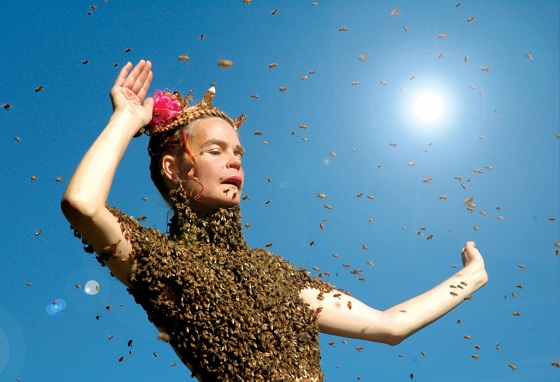 Queen of the Sun: What are the Bees Telling Us? is a refreshing new documentary by Taggart Siegel, exploring the very serious subject of the disappearance of honeybees across North America and Europe. The film is straightforward in some ways; Siegel interviews a host of people around the world about bees, and covers many aspects of the scientific phenomenon, presenting an abundance of relevant information. But this is done with a unique style—the shots meditate on nature, on beehives, or beekeepers as they muse about their love for these essential insects. The opening of the film, for example, gives us the odd image of a woman covered from chin to waist in bees, moving in a slow dance. This is never explained, it is simply a strong image, both beautiful and unsettling, and Siegel presents it to the audience to let them make of it what they will.

The film is not always surreal, however. The focused subject is the major problem of Colony Collapse Disorder, in which a beehive is suddenly deserted—the honey is there, but the bees have vanished. There are many discussions presented in the film on this subject, but the main argument is an environmental one: the use of pesticides are affecting the bees’ nervous system, making them forget where their hive is, and monocultures of crops are removing the plants that bees depend on to survive. The disappearance of bees (which is rapidly happening; five million colonies have already been lost in North America alone) is extremely significant. Not only do bees make honey, they also pollinate forty percent of our food; there are no plants without their pollinators.

The film presents all of these facts and many more to give a broad understanding of the situation that honeybees are in, but it also does more than that. It gives a historical context of the importance of bees throughout human culture, and most of all, presents a variety of colorful characters who passionately express their love for bees, not just because of their practical uses, but because they are extraordinary creatures. Gunther Hauk, a biodynamic beekeeper and farmer who owns a bee sanctuary, is a main focus of the film for his knowledge of the bees’ situation, as is Michael Pollan, the bestselling author of multiple books exploring our modern relationship to food, but many other individuals are presented to give their own insight into the importance of bees. Some of the beekeepers interviewed include an eccentric French yogi in Grenoble; a boy in London who started beekeeping with his dad when he was only nine, and has named each of their queen bees after a queen of England; and a woman fighting to legalize beekeeping in Manhattan so that she can continue keeping them on her Harlem rooftop.These characters’ meditations on bees may at times alienate viewers who are not fond of hippie-ish sensibilities, but hopefully they will serve to intrigue rather than repel.

Siegel includes philosophical meditations about bees and hives, animation sequences, and lovely cinematography of bees in the process of pollinating or building a hive, as well as the aforementioned moments of surrealism, to tell the story of the honeybees’ plight, and simply to illustrate the impact bees have on the world, and on people. The relationship between humans and bees is now more significant than ever, since we have the responsibility of making sure they survive.